Celebrate a Summer of (Jane) Austen

Brazos Bookstore leads a three-month-long, city-wide celebration of beloved classic novelist Jane Austen, which includes book clubs, film screenings, a ball and even a wake. Mural by Jade Young (Jade O'Lantern)/Courtesy of Brazos Bookstore
Following on the heels of last year’s “Summer of Kubrick,” Brazos Bookstore – in partnership with the Jane Austen Society (Greater Houston Chapter), Main Street Theater, MFAH Films and Rienzi, and Rice Cinema – wants Houstonians to don their bonnets and parasols to protect them from the hot sun as they celebrate a Summer of Austen.

The three-month-long, citywide celebration of beloved classic novelist Jane Austen includes book clubs, film screenings, a ball and even a wake on July 18, the 200th anniversary of Austen’s death. Brazos’s marketing director, Sara Balabanlilar, expects the events to appeal to a wide swath of Houstonians. “Everyone comes to Jane Austen with a different sense of kinship to her characters, or a love of the time period, love of the fashion, love of the language,” she says.

All of those aspects of Austen will be on display at Friday’s Summer of Austen Kickoff Party, which includes a screening of the 1995 film adaptation of Persuasion, a book that doesn’t get quite the love other Austen works (cough, Pride and Prejudice) do. And the film will screen in quite possibly the perfect Houston venue – Rienzi.

“This is Jane Austen’s era,” says Rienzi’s learning and interpretation coordinator, Ryan Hernandez, of the small house museum, which specializes in 17th- through early 19th-century European decorative art. “We have this house that can contextualize what is actually happening in these movies, so not only do you get to see the movie, but then you can come in the house and experience what those spaces really would have felt like.”

The Regency Society of Houston will be present (in costume, of course), and Brazos hopes they will inspire others to join in the fun. In fact, attendees who wear their finest Regency dress to any of the in-store Austen events will get 10 percent off their Brazos purchase – and a perfect opportunity will be the Summer of Austen Ball. 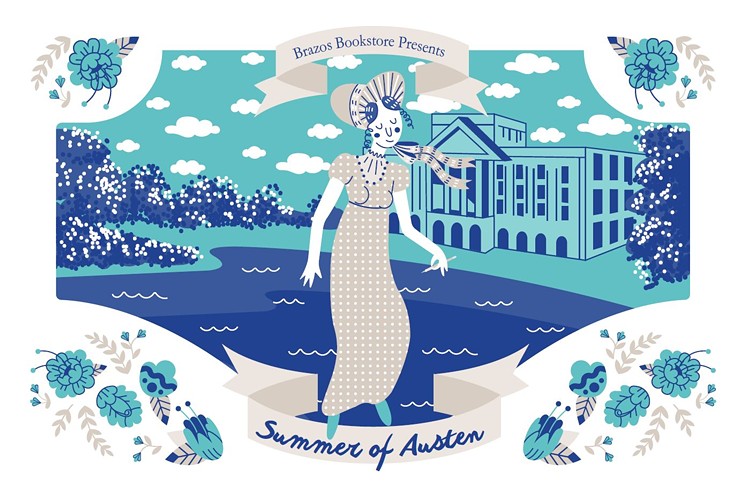 Designed by Jade Young (Jade O'Lantern)/Courtesy of Brazos Bookstore
Balabanlilar describes Brazos-style as a little bit quirky, a little bit weird and silly, qualities exemplified in what Balabanlilar calls “the quintessential event” of the summer – the Jane Austen Wake.

“It really keys into that sense of silliness that we have combined with a real sense of wanting to honor the works of [Austen],” says Balabanlilar. “It ties something that’s potentially really somber, which is the anniversary of Jane Austen’s death, with something that’s really joyous and celebratory,” which will be a surprise performance from Main Street Theater.

Rounding out the summer is a series of book clubs and accompanying film screenings for Mansfield Park, led by Terrence Doody, an English professor at Rice University; Emma, led by Rice professor and director of the Rice film program, Charles Dove; and Sense and Sensibility, led by Main Street’s founding artistic director, Rebecca Udden.