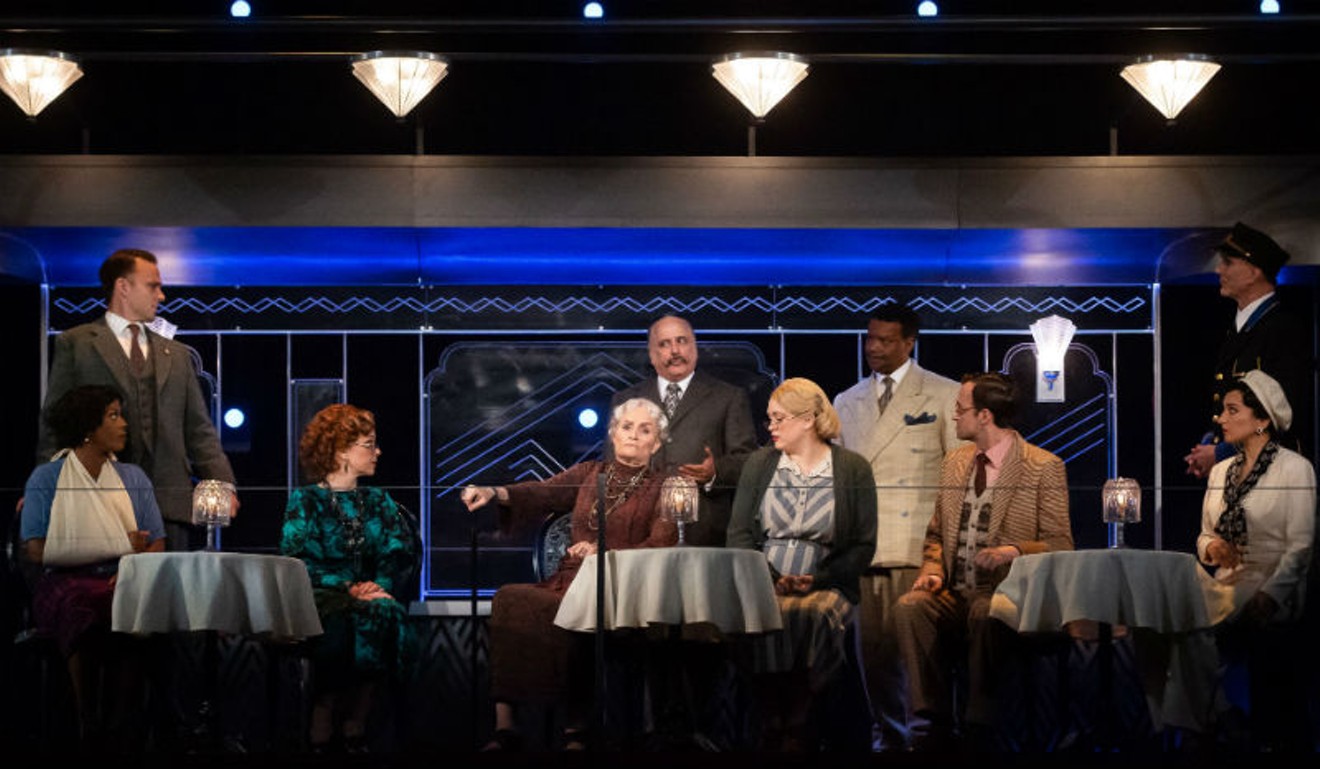 The cast of Murder on the Orient Express stuffed in a train. Photo by Lynn Lane

I suppose if you have nothing better to do during the hot humid days of our Houston summer, you could go to the air-conditioned Alley Theatre and see Agatha Christie's Murder on the Orient Express. Or you could poke out your eyes with popsicle sticks. Your choice.

Ms. Christie's old chestnut was first serialized in The Saturday Evening Post (1933), then novelized in Britain, then serialized again, then turned into a radio play. It lay fallow until 1974, when director Sidney Lumet turned the murder mystery into an Academy Award-winning movie with a sterling cast led by Albert Finney as Belgian detective Hercule Poirot. Two TV adaptations followed, then another film (2017), much darker, directed by and starring Kenneth Branagh as the intrepid sleuth. Perhaps all these adaptations negated a theater piece, or maybe the Christie estate didn't approve at the time, but playwright Ken Ludwig (Lend Me a Tenor, Moon Over Buffalo, the recent Alley hit The Three Musketeers) received permission to write her classic story as a play (2017).

It's OK and serviceable, as far it goes, but there's little energy to it, not much imagination, and the cipher suspects on board the fabled Orient Express are little more than...well, ciphers. There are a lot of dialects flying through the corridors of the Art Deco train – Belgian, French, Hungarian, Swedish, American, Scottish, and Minnesotan. The last belongs to Elizabeth Bunch's Mrs. Hubbard, deliciously channeling Frances McDormand's Marge Gunderson in Fargo. She gets the best lines, the best facial reactions, and is clearly the audience favorite.

Ludwig has kept his baser instincts as playwright on low simmer, though there is an early boob joke that falls flat because of which character says it, and his comic timing is, as usual for him, fairly lame, but he sticks to Christie without doing major damage to her patented ornate structure. He pares the suspects down from the original 12 to eight – 12 was perfect as it represented a jury of peers – but as there are so many characters anyway, getting to know them is sketchy at best, and any more time spent with them would be unnecessary.

The actors do what they can with what they're given, and our hat's off to Chris Hutchison, who plays the entire second act dead in his compartment. Think of it as an extended sequence from Law and Order: Special Victims Unit. This is either fine method acting, or a chance for a quick nap before curtain call. David Sinaiko, an import from San Francisco's Cutting Ball Theater, plays Poirot with as little personality as he can muster. As the Holmes-inspired detective, he's rather bland, neither fussy prig like TV's David Suchet, nor cranky eccentric like Finney, nor sophisticated snob like Branagh. He's good when he exclaims, “Alors, zees ezz a krime,” but really, any one of the male Alley resident players could have done the role justice. As a compatriot of Alley's new artistic director, Rob Melrose, who also hails from Cutting Ball, Sinaiko got the call to play Poirot when resident actor James Black withdrew because of health reasons. Mr. Black, you have missed nothing.

Now, about set designer Michael Locher's train we've been hearing so much about. The press department has worked overtime getting the word out that this is something very special. So much for hype. There's not much to it. The train splays across a second level – dining car, two sleeping compartments, and a cubicle for the conductor – that's all. Everyone's awfully cramped and pushed forward because of the train's aisle, while the stage level basically goes unused, except when a compartment is pushed onto the thrust stage for a dramatic reveal or when employed as the station platform where the passengers are introduced as they board the train. Except for the handsome etched glass panels and a few scallop sconces, the interior is drab and unexciting.

Hell, the train doesn't even move. I was hoping it would chug across the stage like Dolly Levi on her parade passerelle. No, like the tepid play itself, the train just sits there, abetted by a grid of blue lights and some hovering fluorescent tubes in the background. Yes, in the plot, it's conveniently snowbound by an avalanche, but the action's not supposed to be stage-bound. By placing the drama on the balcony level far from us, the play's tension wafts away, dissipates, and never returns. This is not good for Christie.

This version of the Orient Express goes nowhere, slowly.

Murder on the Orient Express continues through August 25 at 7:30 p.m. Tuesdays through Thursdays and Sundays; 8 p.m. Fridays and Saturdays; and 2:30 p.m. Saturdays and Sundays at the Alley Theatre, 615 Texas. For information, call 713-220-5700 or visit alleytheatre.org. $31-$98.
KEEP THE HOUSTON PRESS FREE... Since we started the Houston Press, it has been defined as the free, independent voice of Houston, and we'd like to keep it that way. With local media under siege, it's more important than ever for us to rally support behind funding our local journalism. You can help by participating in our "I Support" program, allowing us to keep offering readers access to our incisive coverage of local news, food and culture with no paywalls.
Make a one-time donation today for as little as $1.