Chefs Otto Sanchez, Justin Yu, Ryan pera, Ernesto Villareal and Rebeccan Masson reunite for Harvey Relief. Photos courtesy of 17 Reunites For Relief
A slew of Houston's most talented chefs will come together on October 1 for one night of incredible dining in the name of Harvey relief efforts. Another thing these chefs have in common — they all came up through former eatery *17 Restaurant together. The restaurant was located in The Alden Hotel (now the Sam Houston Hotel) from 2004 to 2009 and played a major part in honing the craft of some of the Bayou City's top kitchen talent, including Beard Award winner Justin Yu of Oxheart and forthcoming T. Rex, chef Ryan Pera of Agricole Hospitality, and pastry chefs Otto Sanchez of La Table and Rebecca Masson of Fluff Bake Bar.

On October 1, more than a dozen alumni of the *17 kitchen will host *17 Reunites for Relief at Ralph Smith’s Studios in Bellaire. Miner Family Wines, Victory Wine Group and Saint Arnold Brewing Company will supply the beverages with a cocktail hour starting at 5 p.m., and dinner will follow at 6 p.m. Tickets are $150 per person, available online here.

A silent auction will feature luxury culinary experiences and other items, and funds will benefit Southern Smoke, chef Chris Shepherd's nonprofit that is using its 2017 event to provide emergency assistance funds to Houston hospitality workers affected by Hurricane Harvey. 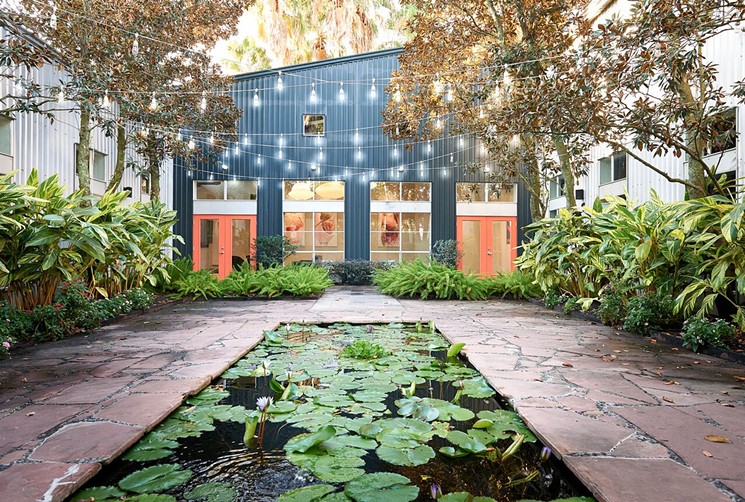 17 Reunites for Relief will take over lovely courtyard in Bellaire.
Photo by Ralph Smith
“Harvey has threatened the financial livelihood of hundreds of thousands of hardworking and proud Houstonians,” pastry chef Otto Sanchez, who organized the event, announced in a press release.  “Houston needs our help right now. This city has always been home for me and so many of my former teammates, and this is going to be an incredibly special way for us to do our part in contributing to the amazing and resilient spirit being displayed now more than ever.”

Check out the impressive lineup of chefs/former *17 employees that he pulled together for the incredible dinner:

For more ways you can support Harvey Relief, check out the Houston Press's current listing of the Houston hospitality industry's fundraisers, events and donation drives.