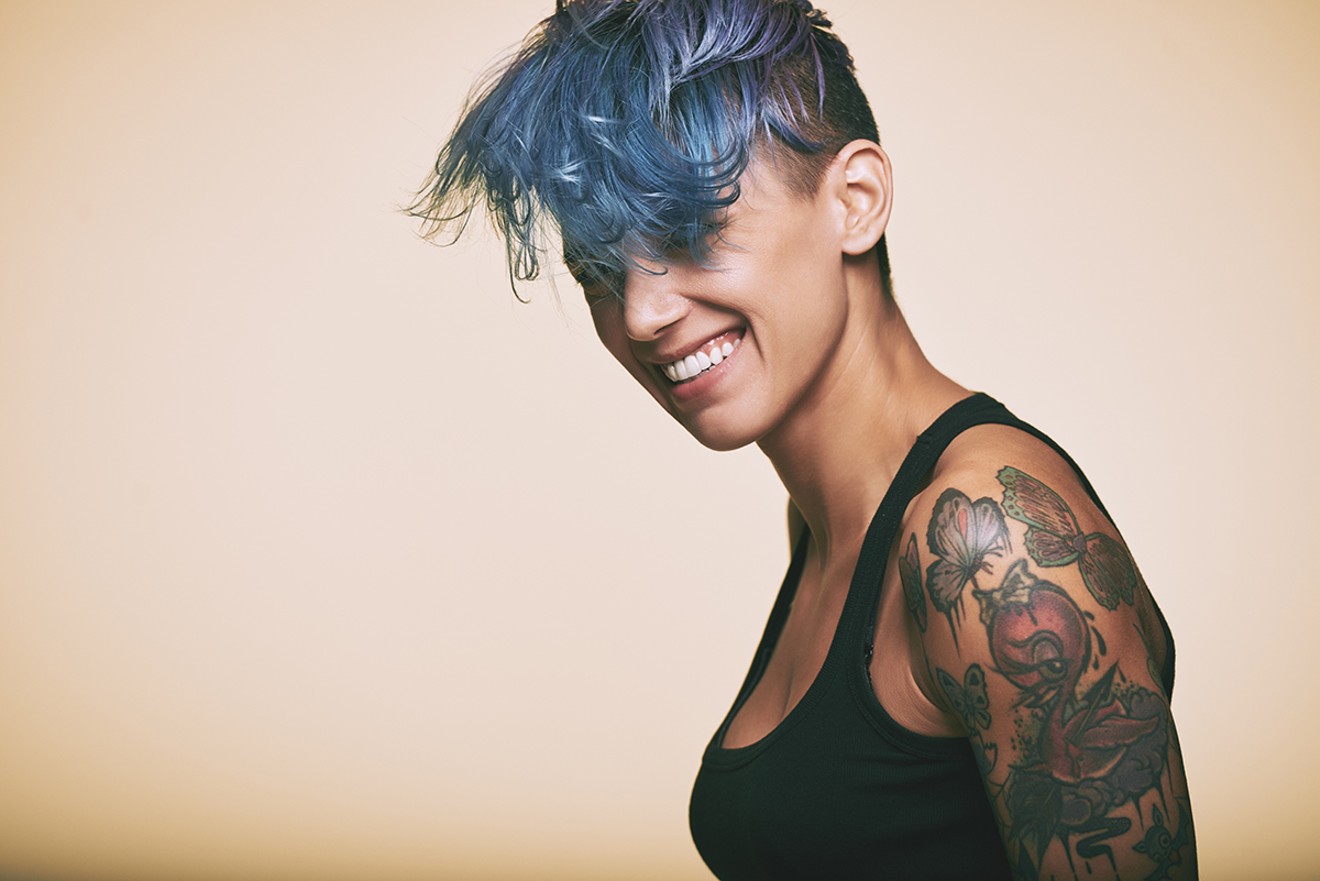 When you're looking good, you're feeling good. We've updated our list of the top 20 elite tattoo parlors in Houston and surrounding areas. Isn't it time for some new ink? Photo by Getty Images
A tattoo tells the world where we've been, who we've loved and honors those who no longer walk among us. It speaks to family: sometimes it's the one we were born into, more often it's the tribe we found along the way. But it should always be meaningful, original and beautifully done. 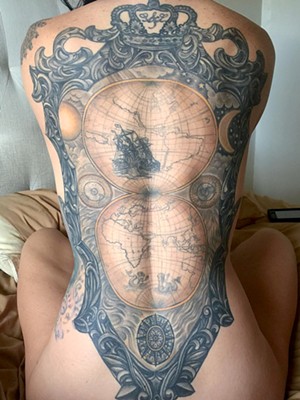 Ink by Nate Beavers, Figurehead Tattoo.
Photo courtesy of Nate Beavers
When we went looking for the best tattoo artists in Houston this year, we eliminated the street and focused on the elite. We looked at Instagram, we reviewed portfolios, we received recommendations and then we fine-tuned the list. Out were the inkmasters who had stopped growing as an artist. Gone were the flash shops with their cookie-cutter designs. Struck were those who didn't consistently deliver quality work. Others with solid reputations but who have set aside the needle to become managers also were eliminated.

Mike Woods, whom we named Best Tattoo Artist in 2017's Best of Houston®, is holding steady at the top of our list. He co-owns Advent Tattoo Studio and Art Gallery along with Mike Ashworth but it's important to note that it wasn't easy picking one Mike over the other when it came to last year's award; the quality of work from both is phenomenal.

We checked in with Woods about what's new in the industry. "Over the last ten to 15 years tattooing has turned quite a bit from where it’s been. We’ve seen a huge influx of people with an art background pushing the envelope of what can be done. You’ve gone from seeing tribal half sleeves to half sleeves that look like oil paintings," says Woods.

"At the other end of the spectrum are artists who are kind of stagnant; happy where they’re at; they prefer a more simple style. They're not really pushing the limits of where tattoos can go," says Woods. "It doesn't take a lot of skill to pick something off the wall."

Our best advice for deciding on where to get your next tattoo? Look at the artist's portfolio, look at his or her Instagram, and check for both quality of work and consistency as an artist. A major tattoo project can take more than one sitting, and since nobody's yet solved the problem of Houston traffic, we've broken our list into inside the Loop, outside the Loop, and outside Houston. 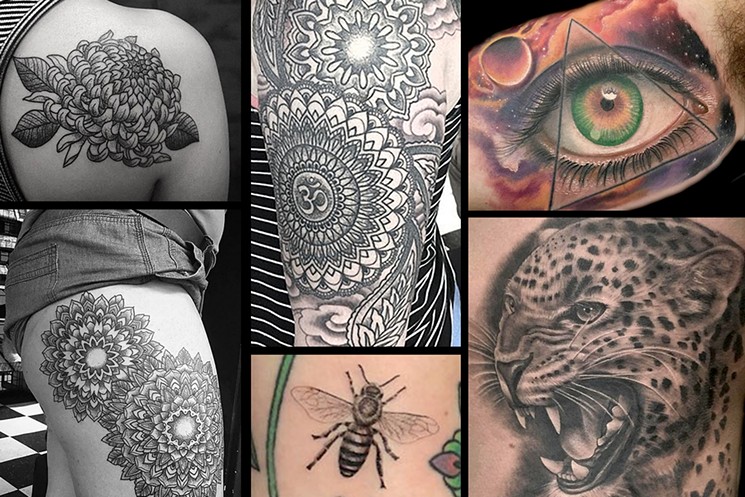 Battle Royale
Gabriel Massey honed his chops at some of the other studios but now he's head honcho. He opened Battle Royale in EaDo this spring; it's a modern take on the traditional tattoo shop. Get a haircut downstairs at East End Barber, pick up a java from Coral Sword and then venture upstairs. Massey specializes in intricate dot work and blackwork, and his mandalas, Día de los Muertos skulls and geometrics are meticulously detailed. American traditionalists Bo Myers and Rick Murillo work out of this studio, too.
1318 Telephone, Space 4, 346-406-3162, instagram.com/battleroyaletattoohtx

Figurehead Tattoos
With more than 25 years of work under his belt, there's pretty much nothing that Nate Beavers hasn't inked. But it's his ability to render animals, insects and just about anything from the natural world that makes his work stand out. If you've got a beloved pet that you want to immortalize forever, Beavers is your guy.
1045 Studewood, 713-742-2828, natebeavers.com

Rampage Tattoo
Ram Perez is an industry veteran and keeps the bar set high for this stretch of Montrose. He's probably best known for his comic book characters and photorealistic work but also enjoys monochromatic and bio-mechanical designs. Vincent Diaz Negron, who hails from Puerto Rico, has a solid portfolio of geometrics and illustrative styles. Perez also has recently opened a sister shop down the street: Violet Tiger Tattoo Parlor.
1425 Westheimer, 281-888-0294, rampagetattoo.com 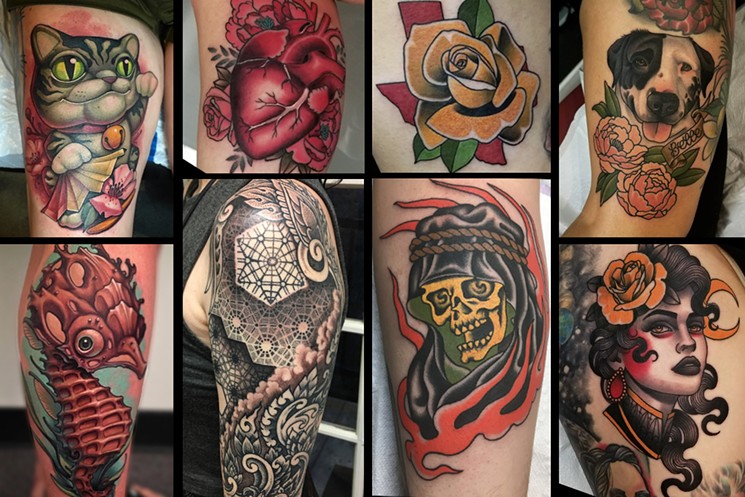 Red Dagger Eastdowntown (they also have a location outside the loop)
Can a theatrical play go on if it's cast with all leads and no second fiddles or extras? Apparently yes. Every single artist working out of this shop is a starter: Abel Sánchez  Bobby Correnti, Shawn Will. Between the downtown location and the one in Clear Lake, there's not a weak artist in the bunch.
2315 Commerce, facebook.com/RedDaggerTattoo 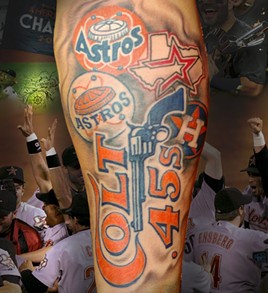 Scorpion Studio Tattoos
"Sapo" Boijseauneau has long been a staple in the tattoo community and his black and gray renderings are sick. For bold, saturated color look no further than Dan Martin, whom we named Best Tattoo Artist in 2013's Best of Houston®, or studio artist Tracy Lambright. Ready to go the distance? Chris Ayala and "Big Gabe" Bayles can tackle that full back project you've been contemplating for so long.
1401 Westheimer, 713-528-7904, scorpionstudiostattoo.com

Secret Tattoo
We've seen some solid work from Gregg Higgins here. His Creature From the Black Lagoon is spot on, and his mandalas are meticulously inked.
1508 Westheimer, 832-962-7121, facebook.com/secrettattooing

Texas Tattoo Emporium
The folks at Texas Tattoo are holding steady with some good American traditional and Japanese designs. Stevie's a Luddite so you'll have to look at his portfolio in person, but Brandon a/k/a Russo is online and has some interesting samples of work.
1540 Westheimer, 713-807-7171, texastattoo.com

Workhorse Tattoo
Their website has a fun, circusy vibe, but it's all business when it comes to ink. Kat McCulloch runs a tight ship and wants each design to be unique — you won't find any flash on the walls of this residence turned studio — and she will work to create something personal. Other artists in the shop have a variety of styles, even black work, so take the time to peruse the portfolios.
By appointment only, 718 Peden, 346-308-5041, workhorsetattoo.com 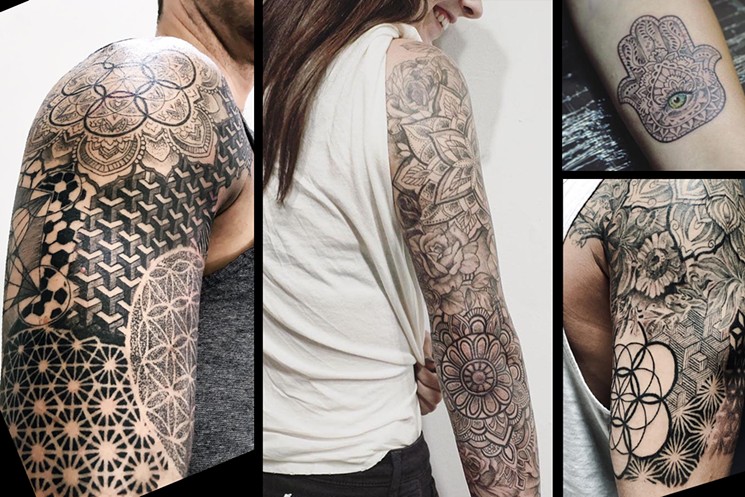 Houston, outside the Loop:

Advent Tattoo Studio and Art Gallery
Mike Woods, artist and co-owner of Advent Tattoo, is booked months in advance for those highly coveted five-hour slots for sleeves and other major ink projects. His portfolio speaks for itself, and this very talented inkmaster works with the body's curves to deliver highly detailed masterpieces that scream to be shown off. He's a class act, and you won't hear him publicly badmouthing the work of others, even when he has to rescue a tearful damsel in distress from a poorly rendered rose. Can't get in? The other Mike at his shop, co-owner Mike Ashworth, does incredible work as well.
16506 FM-529 105, 281-856-2366, facebook.com/AdventTattoo 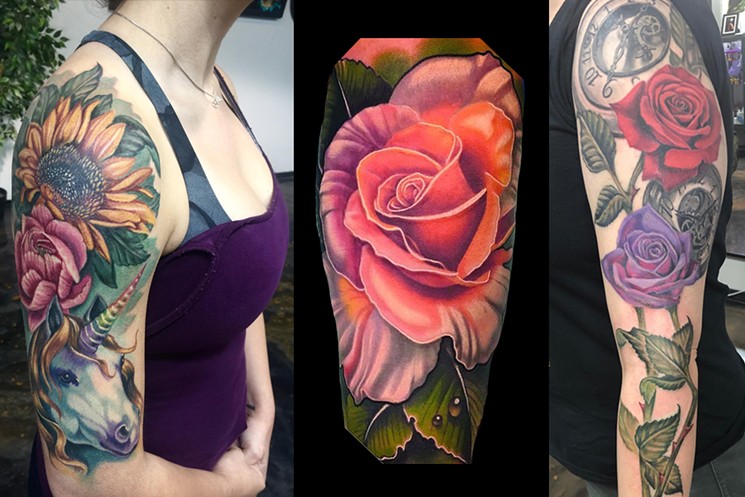 (L) and (R) Ink by Mike Ashworth and (center) Ink by Mike Woods; both at Advent Tattoo.
Photos courtesy of Mike Ashworth and Mike Woods
Red Dagger - Clear Lake (they also have a location downtown)
Red Dagger built its stellar reputation at the Clear Lake studio and it's only recently that they opened a second shop downtown. Every single artist working out of this location will bring his A-game: Aaron Springs, Bobby Mack, Ringo Leone, Steven Compton, Mason Chimato and Chuck Jones. Each artist handles his own bookings so spend some time looking at the portfolios first and remember, choose wisely.
16815 Royal Crest, 281-286-3439, facebook.com/RedDaggerTattoo

Shelter Tattoo
James Samaniego has recently opened his own shop but he's no stranger to the industry. He works by appointment only and the wait is reasonable to get in, usually just two or three weeks. He's got some color work in his portfolio but it's his single needle and fine line work that belong in a museum. The Houston Press readers agree, too, placing Samaniego in the top spot for Readers' Choice Best Tattoo Artist in 2017's Best of Houston®.
10708 Grant, 832-732-1892, jamessamaniego.com

Studio 8
Studio 8 is fairly new but Shaine Smith is a legend in the community and has had a positive influence on emerging inkmasters on the rise. It's not your typical venue — this one's in a private residence — but it's an upscale and relaxing environment and they seem to do it all. Photorealism, visionary, Japanese traditional, modern, abstract and many other styles. Studio artist Zip's got some nice work, including biomechanicals and skulls.
By appointment only, 2323 South Voss, 713-952-9907, houstontattooparlor.com

Timeless Ink Studio
Don't be surprised if you see a Houston Texan in the next chair during the off season. Arturo Hernandez's designs are artistically-done, whether he's inking cherry blossoms or The Plague Doctor. Chris Duarte's a whiz with anything Mayan, Aztec or Egyptian; and Tony Ta's got those Japanese sleeves down to a science.
12827 Westheimer, 281-933-8882, facebook.com/timelessinkstudiohtx 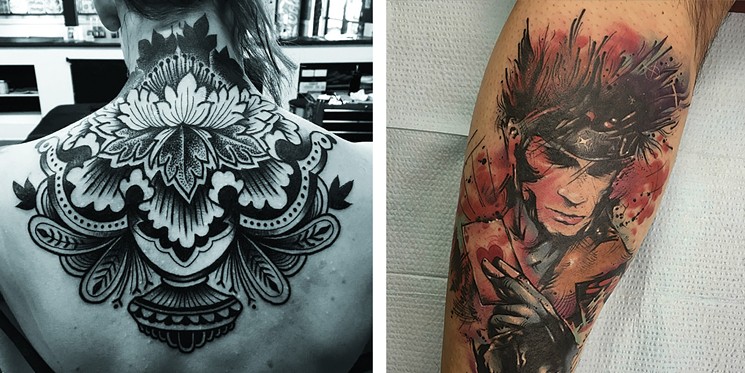 Artistic Impressions Tattoo
We've grown to respect shop owner Spiro Kambitsis; he successfully manages the demands of two locations that offer both tattooing and piercing services. We also have to give props to Tyler Turnbull for his ink. Sure, his "Be Someone" back tat has gone a bit viral of late, but his portfolio also contains show-stopping renderings: Medusa, St. Michael vanquishing the devil or a sleeve entirely crafted from Chevy LS parts.
20633 Katy Freeway, Katy, 281-599-1349, artisticimpressionstattoo.com
16326 Mueschke, Cypress, 832-653-6840, artisticimpressionstattoo.com

Imperial Tattoo Company
What we like best about Jon West is that he's always trying to grow as an artist. Even as a child he knew what he wanted to do and he's earned a solid reputation for his geometrical, dot and neotraditional designs. Fellow studio artist Tony Wayne is good with color, Aaron Bates is your go-to guy for Japanese or watercolor, and there's Cristyan Medina for nature-inspired designs.
403 Highway 6, Sugar Land, 281-302-5224, imperialtattoocompany.com

Superchango Tattoo Studio
We've seen a little bit of turnover at this studio in The Woodlands, but there are still plenty of reasons to make the drive. Shop owner Juan Cabrera's sleeves are rad, especially that recent welding design he just completed this summer. Cabrera also tries to stay current on new trends, regularly attending cons and checking in with industry heavy hitters like Cory Kruger, Deano Cook, Grime Tattoo in San Francisco's and Madrid's Robert Hernandez, among others.
25901 I-45 North, The Woodlands, 281-367-9233, superchangotattoo.com

The Crow's Nest Tattoo Parlour
Captain of the ship is owner/artist Jason Coquel and it's his policy to only do custom tattoos; anybody who requests otherwise will walk the plank. Studio artist Mikey Godwin designed a tattoo this summer that transforms from lady to demon depending on how it's viewed, Jeremiah Beshears has a gift with the portraits, Carl's style is dark and menacing, and Bubba's at his best when it comes to sleeve work.
9222 Louetta, Spring, 832-555-5555, facebook.com/TheCrowsNestTattooParlour
KEEP THE HOUSTON PRESS FREE... Since we started the Houston Press, it has been defined as the free, independent voice of Houston, and we'd like to keep it that way. With local media under siege, it's more important than ever for us to rally support behind funding our local journalism. You can help by participating in our "I Support" program, allowing us to keep offering readers access to our incisive coverage of local news, food and culture with no paywalls.
Make a one-time donation today for as little as $1.