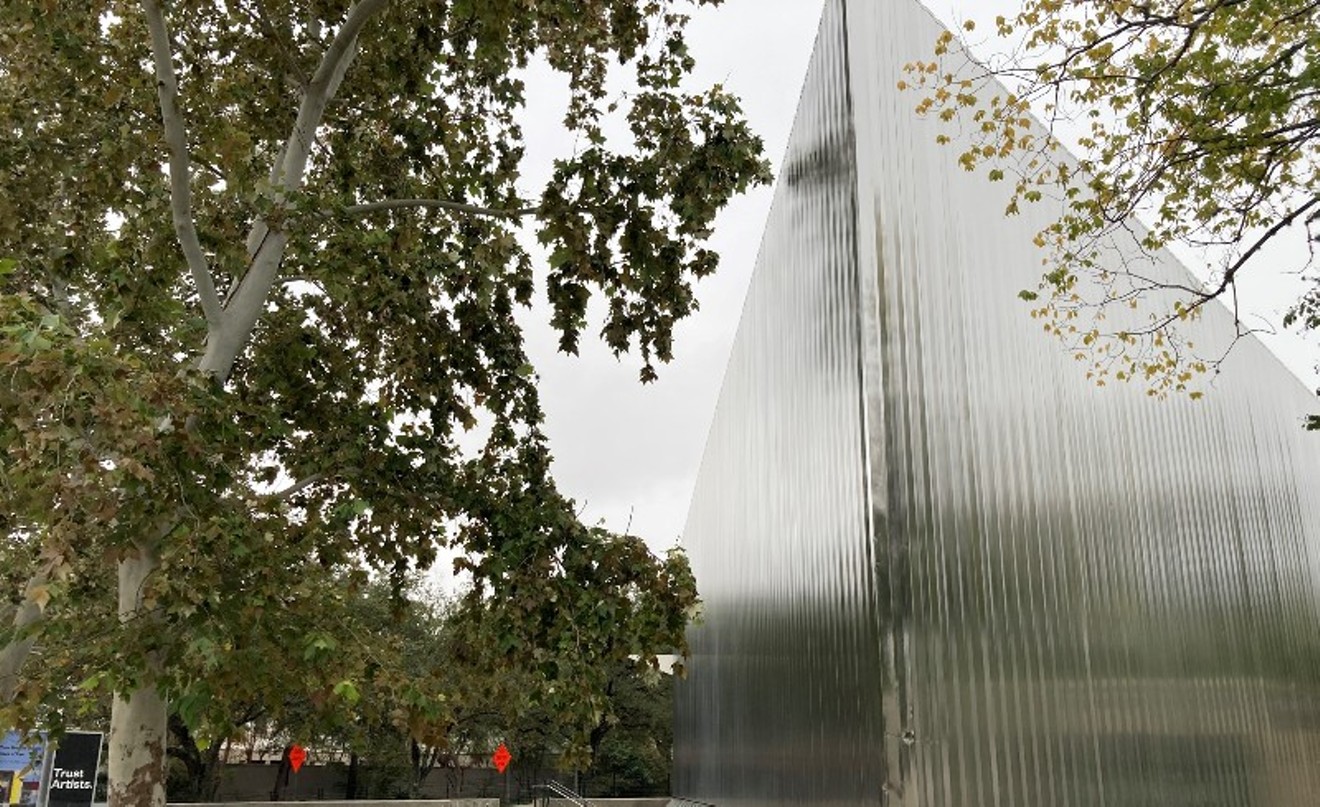 The CAMH Photo by Marc Minsker

One of challenges that many postmodern artists have faced over the last 50 years is how to create something new that transcends human imagination and yet remains fresh and innovative in light of all of the radical and transformative art produced post World War II.

When the master filmmaker Stanley Kubrick was tasked with the idea of portraying aliens in his science fiction film 2001: A Space Odyssey, he acknowledged that it “quickly became apparent that you cannot imagine the unimaginable.” In a moment of brilliance (and thanks to an idea from Arthur C. Clarke’s short story “The Sentinel”), Kubrick settled on a metallic monolith because he felt that an enigma was the most effective way to portray that which we can’t imagine, with the ultimate goal of trying “to represent it in an artistic manner that will convey something of its quality.”

The current building that houses the Contemporary Art Museum Houston was itself influenced by Kubrick’s enigma when architect Gunnar Birkerts designed the structure in 1971. In a recent interview, his son, literary critic Sven Birkets said that Gunnar was “deeply inspired by the film 2001: A Space Odyssey when he conceptualized the CAMH” [building], channeling the power and minimal poetry of Kubrick’s puzzling monolith.

When the museum opened in 1972, 50 years ago this past March, the inaugural exhibition simply titled “10” created shock and scandal in Houston. Organized and curated by Lefty Adler, it suggested that Houston’s art scene could hold its own with New York, San Francisco, or London. Much of the opening’s success was thanks, in part, to the futuristic space around the exhibitions.

Today in 2022, the Birkerts building at 5216 Montrose Boulevard still stands in its elemental and enigmatic majesty, with its steel exterior and parallelogram shape marking the Houston landscape in a way that few other buildings do.

Architect Gunnar Birkerts was born in Riga, Latvia in 1925. Considered one of the architectural gems of Europe, Riga has one of the world’s highest concentrations of art nouveau buildings, mostly constructed around the turn of the 20th century. This impressive urban landscape must have made a dramatic impression on the young Birkerts, who spent his formative years there.

The predominant “Jugendstil” architectural style in the streets of Riga reflects a youthful quality that incorporates natural motifs interwoven into the facades of buildings, featuring the likes of twisted vines, tree trunks, flowers, and other wild elements set in stone. And while this style is nothing like the architectural taste that Birkerts would later adopt, his son Sven highlights that his father’s artistic vision was clearly “enriched by the wealth of folklore, especially the classic legend of the glass mountain, in which a young man had to scale on horseback to reach his love.”

Indeed, Birkerts incorporated this mythology into his compelling design for the National Library of Latvia which, according to his son, was his most prized accomplishment. Sven Birkerts points out that “the profile shape of Latvia’s National Library was deeply influenced by the story of the young lover on the glass mountain story…all about the challenge and the conquest.”

After graduating with a degree in architecture from the University of Stuttgart, the young Gunnar Birkerts emigrated to Chicago to work for Perkins & Will, a reputable architectural firm that started at Cornell. Moving to Detroit to join Eero Saarinen’s internationally known design firm.

Birkerts would eventually form Gunnar Birkerts and Associates in 1963 and go on to design some of the world’s most fascinating structures, including the famed Federal Reserve Bank of Minneapolis. His reputation in America was certainly solidified by 1970, when the Contemporary Art Museum Trustees in Houston selected his design for construction at 5216 Montrose Boulevard.

The seeds of CAMH

Long before Birkerts was brought into the picture, the seeds of the Contemporary Arts Museum Houston were being sown at the end of the second World War.

Mike Reed, the current Assistant Director of Facilities at CAMH, explained that the “museum was originally known as the Contemporary Arts Association of Houston, Inc., when it was formed in 1948. The group put on shows in other spaces including the MFAH until they built the original A-frame building.” This building was apparently an early prototype of a pop-up art space: a small, wood-frame gallery that could be easily assembled at a unique location for one show before being dismantled and moved to another.

Based on research conducted by Stephen Fox, an architectural historian and lecturer at the Rice School of Architecture, it appears that one of the semi-permanent locations of the original CAMH A-frame gallery was at 502 Dallas Avenue. The catalogue he shared, from an early exhibit at the Dallas Avenue space, provides insight into the organization’s mission in those early days before 5216 Montrose opened:

“It is significant that the quality of number of paintings, watercolors, and prints owned in Houston has permitted selection of the present excellent exhibit of works by well-know artists of the twentieth century. The fact that it is possible to assemble a show of such merit from local collections demonstrates an active interest in the works of contemporary artists…That increasing interest was the reason for the organization of the Contemporary Arts Association in 1948 and the construction of the new museum in 1949.”


By the 1960s, the collection and organization had outgrown the A-frame building and began planning for a new space that could accommodate more art and could architecturally represent the innovative and evolving interests of the organization.

Gunnar Birkerts spent quite a deal of time in Houston during the latter part of 1971, when the foundation for the museum was being poured and the frame was being erected. The entire construction period was less than 16 months from start to finish.

For the opening on March 10, 1972, the Houston art world turned out for the invite-only affair. Birkerts was on hand and interviewed on camera about his thoughts on the new space and its design. Thanks to the historic footage shot on Betacam by Houston’s Ant Farm collective, there exists a short interview with Gunnar Birkerts where he speaks about the building and its potential. In the video clip, Birkerts provides insight into space:

“The first notions were that there should be no building at all. The envelope is just a functional necessity. Let’s say we’d have no enclosure whatsoever. We would be inside out and outside in, totally espoused. It [finally] boiled down to a universal space that is in no way manicured or polished to the point where the artist in inhibited to perform…A space that lends itself to a free incorporation of any media.”


Freedom in the design was extended to the freedom experienced in the opening exhibit organized by then CAMH director Lefty Adler. The debut exhibition, simply titled “10,” was reference to the ten contemporary artists featured, including the likes of William Wegman, Newton Harrison, Michael Snow, Vera Simon, and Ellen Van Fleet. Some of art installations were outside the building (as with Simon’s wave pool or in the sky with the flashing lights on the Goodyear blimp).

Certainly, some of the work was designed to shock, including Van Fleet’s now notorious installation titled New York City Animal Levels. This massive work, which included real live animals and insects stacked on top of another, from cockroaches to mice to rats to cats to pigeons, created quite an initial buzz for its design and a lingering impression when the smell of feces and the effects of disease spoiled the artwork weeks after the opening.

And while the opening exhibit at CAMH created quite a stir in the Texas art world, Lefty Adler’s position as senior curator was terminated by the beginning of 1973 and he moved on to greener pastures in San Diego, taking a lead role at La Jolla’s Museum of Contemporary Art.
Local gallerist and art impresario Fredericka Hunter, founder of Texas Gallery, remembers when the Birkerts building opened in 1972. She recently shared her memories over email, reflecting on the Houston art scene at the time of the opening:

“Just consider what people were thinking about architecture and art at that time….what was in the air? Industrial open spaces, lofts, “factory” as in Warhol. Also there was feeling of art being on a cusp of becoming more technological, experimental mediums, physically interactive, immersive….even if most of this was rather a fantasy…but perhaps a time that has arrived some 50 years later?

Is it true that the original plans had proposed having certain facilities that would allow an artist to make these experimental works, including copious electrical resources, water, and natural gas …or was that a myth?…or perhaps a proposal that was part of the nature of the design but not practical to realize?”


Hunter’s reflections point to the apparent creative energy and buzz in the early 1970s around the many proposed ideas for a cutting-edge art space that captured the imagination of Houston’s art world shortly after NASA had sent astronauts to the moon. Looking back 50 years later, it is probably easier for naysayers to level criticisms than for supporters to praise. As Rice professor Stephen Fox so eloquently identified:

“The CAM’s architecture is intriguing because of its relationship to changing ideas about modern museum architecture. My sense, as a historian and critic, is that the 1972 building has acquitted itself admirably over its lifetime. It has demonstrated remarkable resilience and still performs very effectively. Its conception as a structurally unencumbered space that gives artists and curators the flexibility to pursue very different types of installations has been sustained in practice.”


Whether you find the architecture of CAMH beautiful, puzzling, or an eyesore, one thing is for sure: the building’s envelope produces questions and challenges expectations – which is what all good art should do. 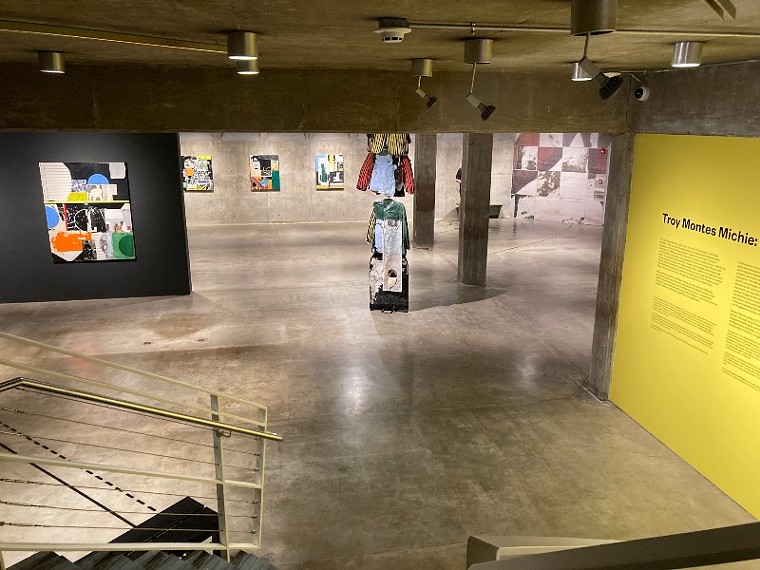 The lower level
Photo by Marc Minsker
KEEP THE HOUSTON PRESS FREE... Since we started the Houston Press, it has been defined as the free, independent voice of Houston, and we'd like to keep it that way. With local media under siege, it's more important than ever for us to rally support behind funding our local journalism. You can help by participating in our "I Support" program, allowing us to keep offering readers access to our incisive coverage of local news, food and culture with no paywalls.
Make a one-time donation today for as little as $1. 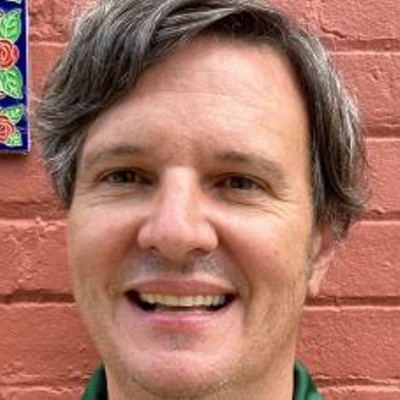 Contributor Marc Minsker lives in Washington, DC, where he works as an assistant principal and a radio DJ on WOWD/Takoma Radio. His writing has appeared in various publications over the years including Terrascope, The Minus Times, and The Washington Post.