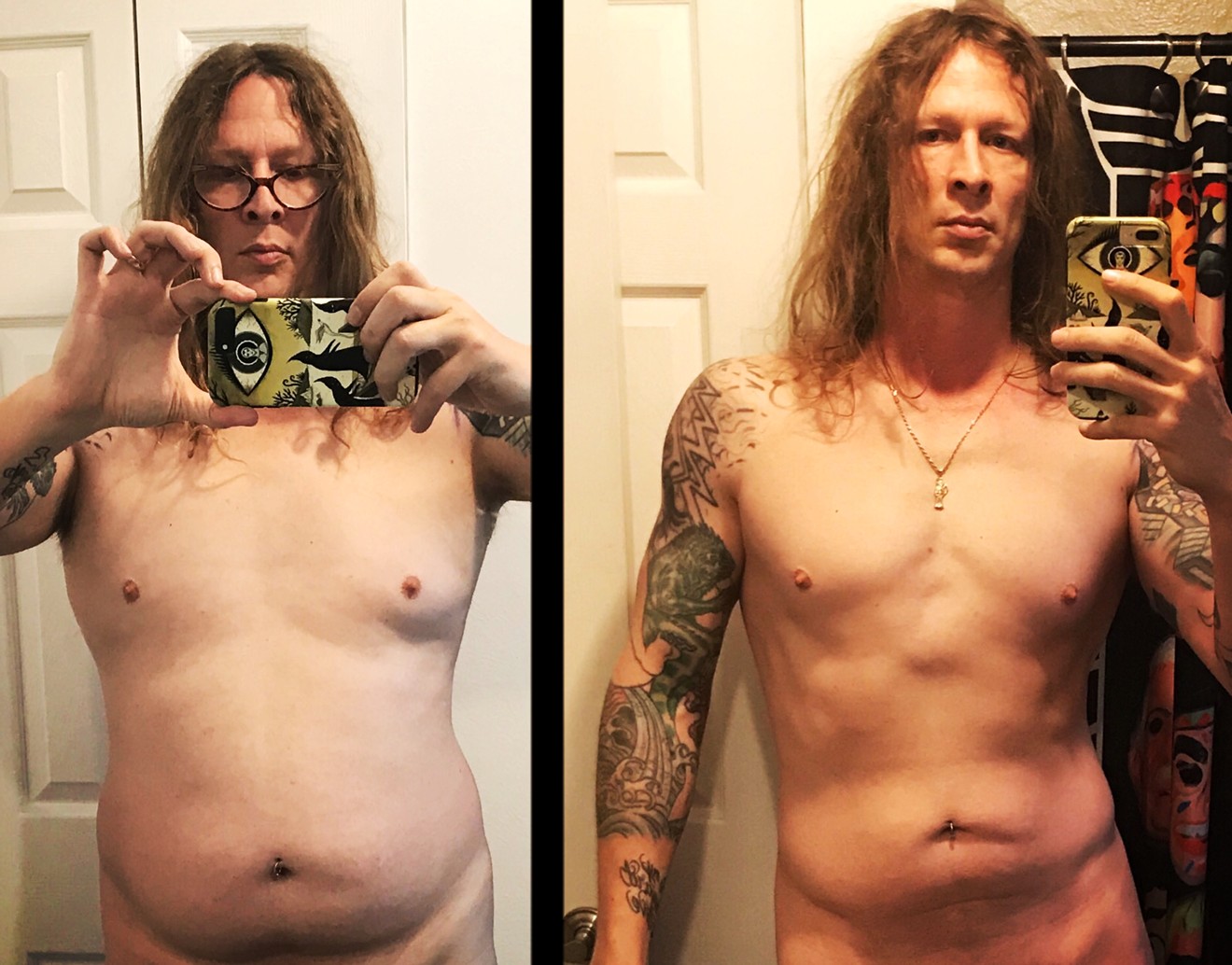 Me in June of 2017 and last week (February 2018) Photo by Chris Lane
A year ago, I was in terrible shape. I sat in my doctor’s office after my yearly physical, with a look of dazed bewilderment on my face. I'd weighed in at staggering 272 pounds, a number that seemed impossible to me. I'd been a thin guy most of my life, and here I was, a fat dude with aching knees and back, who was having occasional heart palpitations and getting winded walking up flights of stairs. I didn't arrive at such a sorry state overnight and had clearly long been in denial, but I decided that I was going to reverse course.

In the ten months since, I've dropped almost 80 pounds and put a little of it back on as muscle. I realized many things along the way, and here are a few of them. 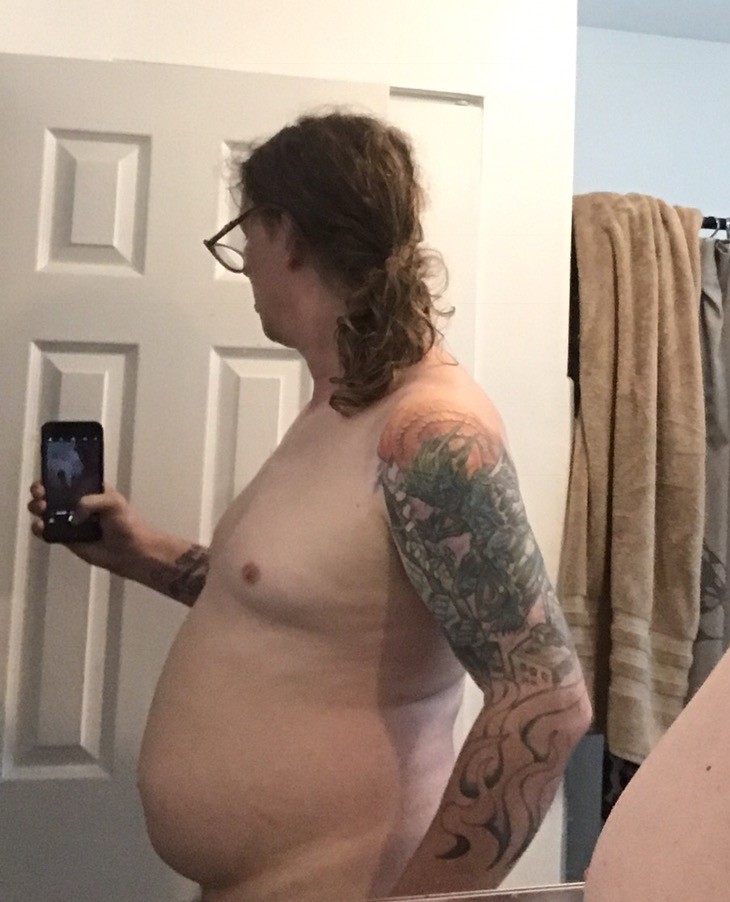 Me back in June of 2017. shudder.
Photo by Chris Lane
6. I Had Gotten Fat So Gradually, I Hadn't Really Noticed It.

This kinda goes without saying, but one doesn't usually gain 70 or 80 pounds by living healthy. I'd slowly put on the weight over years of unhealthy eating habits, which had increased in recent years after familial obligations decreased the amount of time I felt I had to cook or exercise. Instead, I'd grown accustomed to eating on the run, shoveling fast food and other convenient but fattening junk down my throat. Additional stress came along, and that didn't help things either - it's pretty easy to rationalize eating fattening comfort foods when your life feels challenging and you need some comforting.

My weight gain had occurred gradually, and I didn't look in the mirror daily and see the fat guy I'd become staring back at me. Our minds can rationalize and ignore almost anything, and mine had clearly gone into denial overdrive. I suppose I'd noticed that I had gone from wearing size 32 to 48 in jeans, and had moved from wearing medium or large t-shirts to 2XL, but it was easy to chase those thoughts out of my head. I'd notice that I didn't look good in photos anymore, but again, I just told myself I was not photogenic or had been caught at an unflattering angle. I ignored the reality that there were few flattering angles when I was pushing 300 pounds. It was easy to just rationalize that I'd “filled out,” rather than I'd become obese - a word that seemed scary and completely alien when applied to myself.

But sitting in that doctor’s office, I had a moment of clarity and realized I was a fat guy, and needed to make some changes. So what to do? This sweet "Howling Wolves" shirt used to fit me last year. Now it looks like I could use it for a tent.
Photo by Chris Lane
5. I Had To Change My Lifestyle And Diet A LOT.

Initially, I cut out all of the foods I already knew were bad for me. For someone who is reasonably fit, that would probably be a small list of guilty pleasures to pare down, but in my case, it was nearly everything I'd become accustomed to consuming. I didn't have a “plan” exactly, but I guessed that I'd been eating WAY too many calories for a mostly sedentary person, and decided to consume less than 1,800 a day. I use a couple of good calorie and nutritional tracking apps I downloaded to my phone. Keeping track of my caloric and macronutrient intake, was very beneficial in keeping me focused on my goals.

I also cut out high fat, refined foods and anything loaded with sugar. I strictly avoided all fast food and junk food - if something came in a bag and was sold at a convenience store, it was almost certainly off the list of things I'd eat. Ditto with drive-through junk from any fast food chain. I only drank water, and I drank a lot of it. No alcohol (I'd quit drinking years before anyway), no juices, and no soft drinks.

Early on, I wasn't exercising, but the radical change in my diet started showing results very quickly, and I began to lose weight. As the pounds gradually dropped away, I began to see my body transform back to something I remembered and preferred. I'd begun my weight loss journey in March of 2017, and by October I'd lost 70 pounds. It was hard, and not exactly fun. I'd tweaked my diet the entire time, and added some simple cardio and weight training in my backyard. I felt a whole lot better, and my health began to improve. Getting in shape was its own reward, and avoiding unhealthy foods I used to enjoy was worth the price. And speaking of price… Mealtime looks a lot different than it used to.
Photo by Chris Lane
4. Eating Healthy Isn't Convenient Or Inexpensive (But It's Worth It).

If one looks around, it's obvious that a LOT of people are overweight. Living in America makes it easy to get fat, and something like 70 percent of adults in this country are overweight or obese. There are numerous reasons for this sad fact, but without going into a lengthy rant, I'll go with the simple observation that we’re bombarded by easily available, inexpensive, and terrible food choices. Unless you're fairly affluent, it can be difficult to eat healthily. It's easy to blame fat people for being somehow morally flawed or stupid for allowing themselves to become obese, but overly processed, high calorie, and low nutritional value food is less expensive than the healthy stuff. Some folks are low income or live in food deserts. Eating healthy can be expensive and time-consuming.

But it is possible to make better food choices at nearly any income. I'm not well off, but I'm not destitute, so I'm fortunate. It was still a lot easier to eat tasty but unhealthy garbage food than it is to do the huge amount of weekly food prep and expensive grocery trips that I do now. There are a lot of drives across town to get a couple of things at one place that carries food I want, then heading over to another to get something else that only they carry. It would probably be prohibitively expensive for me, except that I view it as an investment in my health and have cut back on other types of purchases.

My dog Sputnik probably ate healthier than I did a few years ago. I don't even recognize myself in these photos. I didn't realize how fat I'd gotten either It's easy to lose perspective when youre always around other overweight people.
Photo by Chris Lane
3. Most Of Us Are Surrounded By Lots Of Out Of Shape People, So Being Fat Can Feel Normal.

Speaking as a former fat guy, I can say that part of the reason it took me so long to notice the sorry state I was in is because so many other people are fat. I'm not blaming anyone except myself, but it's easy to rationalize weight gain as an inevitable part of life when most of your peers are out of shape too. The obesity epidemic in his country has normalized being fat to a point where I didn't really ever consider that I had a problem until my health began to suffer. When most of your friends are overweight or obese, you can lose perspective on what a healthy weight even is. That's not me fat shaming anyone, that was just a fact of life for me.

Welcome to my beer diet... Yeah, if anyone offers you fitness or diet advice that sounds crazy, walk away fast. There's a surprising amount of misinformation and malarky being spun as a great "easy" way to get into shape. The truth is, it's not easy to get in good shape, it's just worth the effort.
Photo by Chris Lane
2. People Gave Me Lots Of (Usually Unsolicited) Advice. Most Of It Was Terrible.

When folks began to notice that I was losing a lot of weight, I began to get advice on what to do with my diet. Most of this advice came from people who were also out of shape, but who advised me to do everything from eliminating all carbs to taking over-the-counter speed. The last thing a fat guy like me needed was to binge on stimulants or increase my bacon fat consumption, but that was the kind of advice I got from well-meaning acquaintances. Others tried to steer me towards one fad diet or another, or were worried I was sick or had a cocaine habit.

When you start to change your physique people will notice and might feel inclined to give you pointers or express concern. As a rule of thumb I wanted to research any advice I received before embarking on a buddy’s “beer, bacon, and cheese” diet. This taught me something though.

Getting good advice and motivation from people like my trainer Matt Bickmann has been invaluable to me.
Photo by Chris Lane
1. Having The Right Type Of Support Makes A Big Difference.

After getting a lot of weight loss advice from chubby friends, I figured I was better off getting it from people who were in better shape than myself. I'd reached a point where my backyard weight lifting had paid off enough that I wanted to take the next step, so I did the unthinkable and joined a gym. Gyms have personalities, and every one I'd checked out in years past was off-putting to me for one reason or another. Some feel like meat markets, some seem like they cater to people who want to be in classes of one kind or another, others are just not kept up well. I found a gym I could live with, and it made a huge difference.

After a month I could tell my body was changing, so I decided to invest in working with a personal trainer, and found a great one named Matt Bickmann. He's definitely helped me take my fitness goals up a notch, and I would recommend that anyone who wants to improve their physique and can afford a trainer’s services to go for it. I've gained a couple of inches of muscle in my chest and shoulders, and having someone skilled at keeping me motivated has made a huge difference in my progress. At 48 years old, I've made many lifestyle changes and am probably in the best shape of my life. Having the right kind of support through this continuing journey has been invaluable.

Last week at Hank's Gym. Feeling good about my future goals.
Photo courtesy of the author.