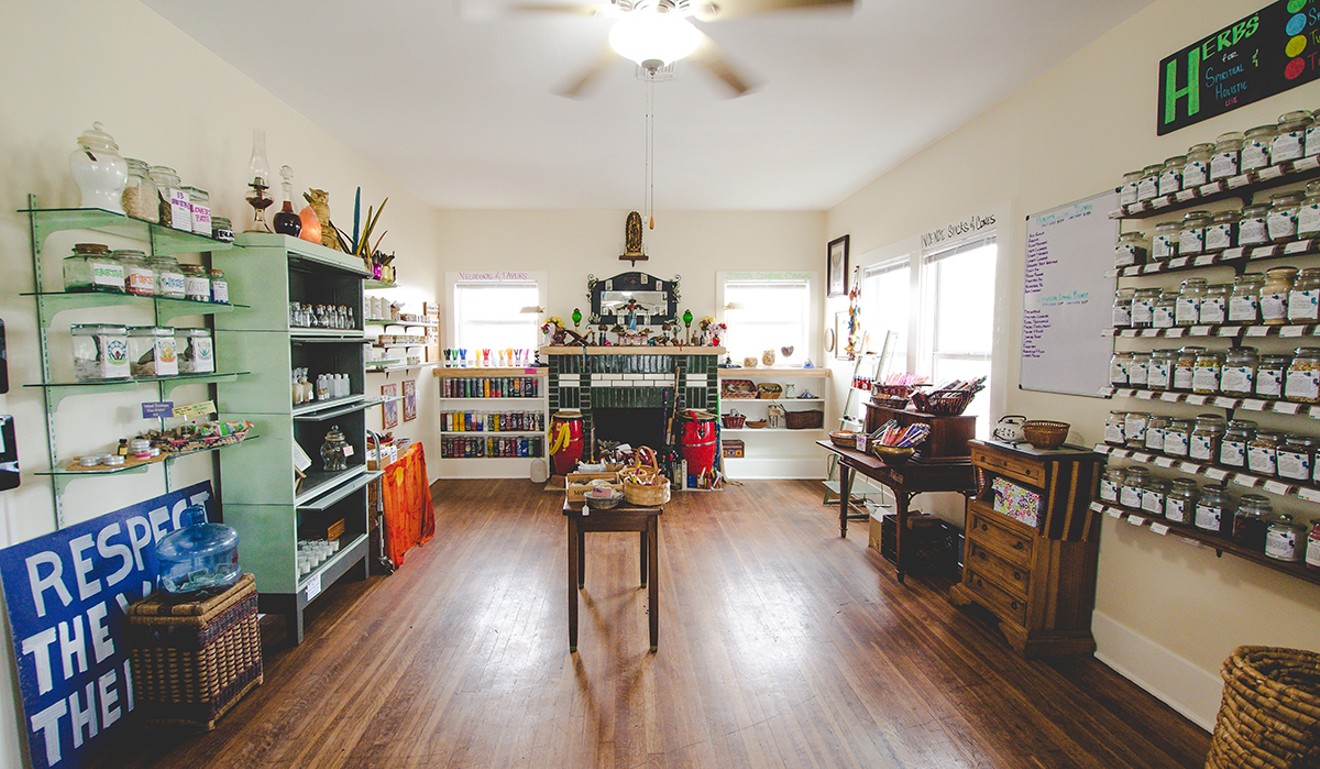 Absolem, whose grandmother was a curandera, says he was initiated by Priestess Miriam Chamani, co-founder and Mambo (Mother) of the Voodoo Spiritual Temple in New Orleans, which focuses on traditional West African healing practices. "I gave my service to Marie Laveau, the Voodoo Queen. I’ve studied under several elders, oil making, candle making," says Absolem. "About three years ago I sat down with Priestess Miriam and there was a call; that’s why we started this place."

"This place" is Absolem's Midtown Mojo Manufacturers, a local purveyor of herbs, roots, cleansings and consultations that got its start with a radio show (Bayou City Conjure Radio) and its first location in a small fourplex on Chartres. 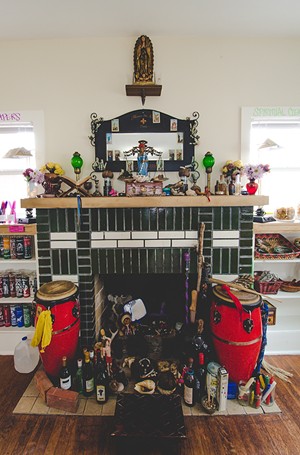 It's rumored that Absolem's Midtown Mojo Manufacturers has a piece from Marie Laveau's tomb.
Photo courtesy of Absolem's Midtown Mojo Manufacturers
"Here where we’re at [4023 Polk], it’s what we call Mama’s House, because we serve Marie Laveau. We have a public altar. We initiate every year on Saint John’s Eve. This is the place to go if anybody is interested in serving Marie Laveau," says Absolem, who says it's rumored that they have a piece of Laveau's tomb, which is important as it's much harder to visit her tomb in New Orleans since the cemetery was closed to the public after decades of vandalism.

Absolem landed the title of "Voodoo King of Houston" last fall during the World Series when reporter Phil Archer of Channel 2 asked Doc Mojo to put a curse on the Dodgers. "I said well we don’t curse around here, we stick more to the light as a house to do good things. We can bind them; afterwards we’ll release them," says Absolem. The ceremony, which involved white rum, two dozen roses and some drumming might have helped and certainly didn't hurt as the 'Stros won both games. "I got a lot of respect from New Orleans because of that," says Absolem.

A variety of interesting classes and events are held at Absolem's Midtown Mojo Manufacturers, which also supports outreach initiatives like bringing hope to the homeless or helping to clean up Olivewood Cemetery.

Absolem says he first became aware of the six-acre cemetery northwest of downtown about ten years ago; it's where many freed slaves and some of our city's earliest black residents are buried. Symmetry of the Cemet'ry is a two day course that shows how to decipher the signs and symbols on the grave markers and concludes with a trip to the cemetery.

"It’s a basic introduction of how you come in, make offerings, show respect. A lot of the slaves, they were still in the old ways, West African traditions, using old symbols of spirituality," says Absolem. Well-intended people who had worked on cemetery clean-ups in the past removed conch shells (placed there as a symbol to ensure safe passage or a reminder that the deceased was not forgotten), and also uprooted iron pipes poking out of the ground.

"This restoration project is because of the lack of education. There were iron pipes in the graves; they were a gateway so that family members could come back and forth in spirit form," says Absolem. "A lot of the names are in blue and white written backwards."

But don't wait for a class to stop by and explore. He says Absolem's Midtown Mojo Manufacturers is a community gathering place. "Everybody is welcomed. We are for real. People will leave here learning something," says Absolem. "We’re very welcoming; we’re not spooky at all. People come up, it looks like your grandma’s house. We’re kid-friendly. Kids draw on the sidewalks with chalk. We've got free wifi, coffee and tea. Come and feel the good vibes.