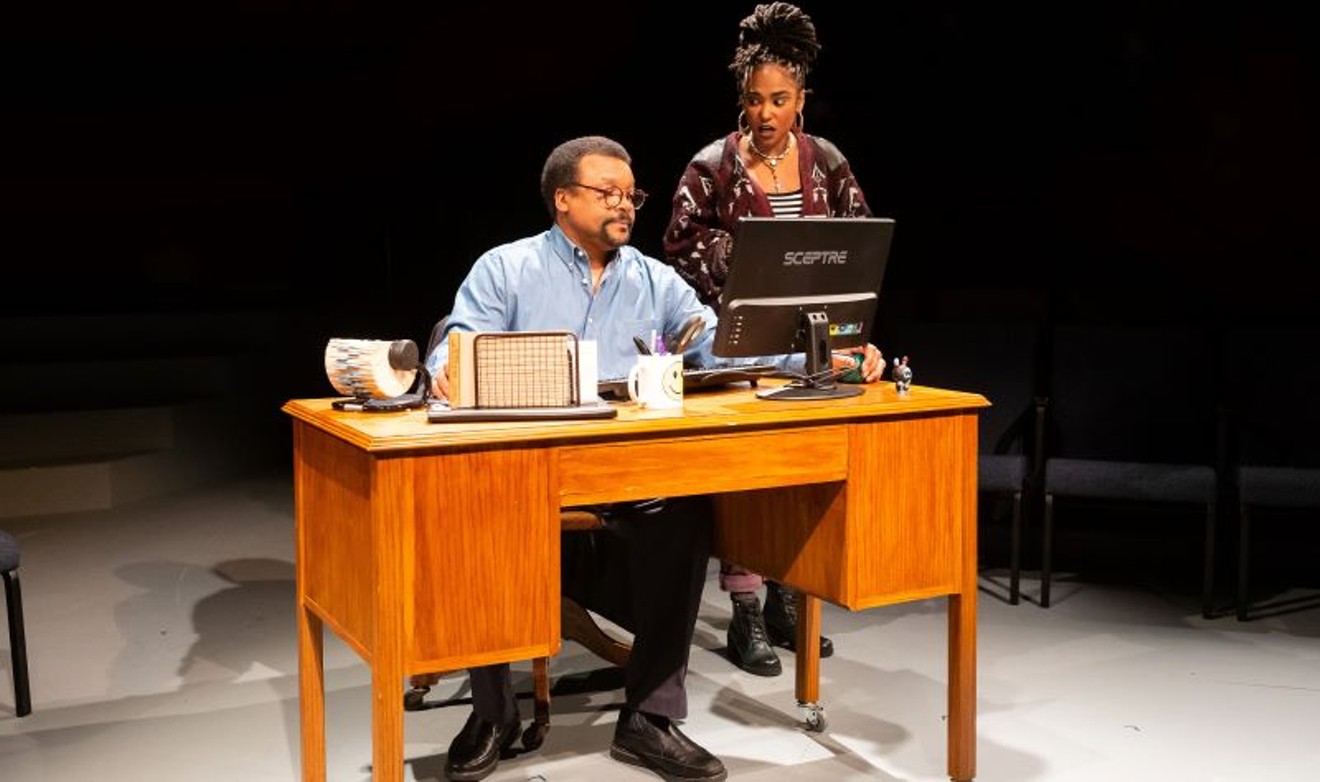 Shawn Hamilton and Raven Justine Troup in Amerikin by Chisa Hutchinson. Photo by Lynn Lane
Jeff is a husband and an adoring father to a newborn. He’s gainfully employed as a security systems manager with long-time close friends. Loyal friends that have his back. Yes, he swears a lot. But then everyone in town does. No big deal. He’s a good guy, they say.

And sure, he’s named his black dog the N-word. But he doesn't mean anything by it. It's just a joke. He probably wouldn't have done it if he lived near or knew any Black people.

And yeah, he wants to join his small town’s white supremacist group, the World Knights. But not because he actually wants to hurt Black people. He just likes the sense of community the group provides. The way they take care of and support each other. It’s an advantage he wants to give his son.

So, does this make Jeff a racist? A capital R racist? Or an opportunist? Simply a product of his environment? Is he worthy of our understanding? And what should we feel if the racism he wades into turns around to bite him back?

Terrific fodder for a play to be sure, but made far more interesting in Amerikin because it’s written by Chisa Hutchinson, a Black playwright wrestling with these questions. Trying to understand what makes an otherwise regular white guy want to be part of something so hateful and harmful to her community. Trying to not let any understanding cloud the issue of accountability.

Developed as part of the 2019 Alley All New Festival, Amerikin (Directed by James Black and featuring a uniformly stellar cast in this premiere) works best when Hutchinson focuses clearly on the main thread of her plot.

Jeff (David Matranga) gets the invitation to join the Knights from his friend, Dylan (Justin Doran). Jeff’s seen all the good works the Knights have done for the community. Helping people get jobs, communal child care, even paying for a member’s funeral when the widow was unable.

Jeff’s other friend, Poot (Adam Gibbs) isn’t too keen. He agrees that good work has been done by the Knights, but he doesn’t buy into the racism the group espouses. Still, he supports Jeff’s decision to join, even asking if he can bring a date to the induction ceremony.

There’s just one last hurdle. Jeff needs to produce a DNA test proving he’s 100 percent white, and it’s not a spoiler to say that things don’t go as planned.

Jeff thinks he's found a way to conceal the test results from his soon-to-be fellow Knights, but a burning cross on his lawn proves otherwise. Suddenly Jeff’s life is upended and his family is ostracized.

A racist outed as “other” and turned on by his white supremacist brothers is too good a story to pass up for Black Washington Post journalist Gerald (Shawn Hamilton). So, he and his journalist-in-training daughter, Chris (Raven Justine Troup) head down to Sharpsburg, Maryland to interview Jeff and tell his story. Potentially at their peril.

Had Hutchinson stuck to this narrative plan of attack, Amerikin would have allowed her plethora of fresh and unique perspective writing to fully shine.

It’s through Poot’s discussion with Jeff that we learn of the pluses and minuses of Knights membership. Much as we hate to see it, we understand why someone like Jeff would be attracted to the community support the group offers. And why he can shrug off the nefarious element without as much as a second thought.

We all wish we had a pen and paper to take notes as Gerald and Chris discuss their approaches to racism while they drive down to Maryland. Hutchinson’s framing of the two generations as opposing Martin's/Malcolm's points of view has so many bullseyes on either side that we easily lose score. Not that anyone is keeping track as Hutchinson makes equal time for Gerald's idea of calm understanding in order to win trust and change minds as she does for Chris' notion of fighting back hard to show them they can't mess with us.

Unfortunately, these and many other examples of Hutchinson’s sharp insights get clouded by superfluous plot points and stretches of imagination.

Then there’s Hutchinson’s outlandish portrayal of journalism in the second act. When Gerald, a professional writer working for a major publication, decides to bring his daughter to an interview, we give it a pass, even though we know journalists don’t bring dates to work. Especially their outspoken and wet-behind-the-ears journalist children in training.

However, Chris’ outbursts during the interview at Jeff’s house — blatantly laughing at the name of one of his friends, loudly criticizing her father and voicing her dislike for Jeff mid-interview while Gerald says precious little to stop her, is so blatantly unprofessional on both their parts, we lose belief in the whole scenario.
Worst still is Chris’ physical actions during the interview where she grabs evidence out of Jeff’s hand and trespasses into rooms she was not invited (tipping off the climax of the play).

Even when facing racist monsters, it’s doubtful this is the action journalism schools or the Washington Post advocates/tolerates. Or, more importantly, conduct that Gerard would ever allow.

This dubious behavior leads us to question Gerald's certainty about Jeff's final motivations when he publishes his article – which he narrates at the end of the play. Was Jeff a racist in his final act or was he just desperate and possibly insane? It seems like Hutchinson wants us to believe the former but she’s made it near impossible for us to get there even though we want to.

But let's end back on the positive. Houston doesn't get that many premieres, let alone one that's been developed locally. And kudos to the Alley here for making this happen. Amerikin has the bones to be a truly intriguing and exceptional work. The hope from here is that the show keeps editing and tightening its focus so that Hutchinson's ideas can shine brightly.

Praise must also go to Michael Locher's inventive scenic design that turned the Neuhaus’ theater in the round small space into 360 experience by utilizing not only the center stage, but the seating wings as well to give us a small town shabby house with multiple rooms and outdoor space. Just terrific.

Anyone who thought Kate Winslet in Mare of Easttown was the only one who could perfectly master the rounded vowel accent of the region needs to tip their hat to Carolyn Johnson’s dialect coaching. Sure, it sounds kind of funny, a cross between Moon Unit’s Valley Girl and a Canadian saying oout and aboot. But Johnson and her cast got it bang on and never wavered. Just another feather in the cap of this outstanding cast.

And finally, one last word about the actors in this production. Or more broadly the actors cast in Alley shows this season. Known for its excellent repertory cast, it’s a real treat to see the company branching out to also include so many local actors outside of its usual troupe. Many of whom we’ve never seen before on Alley stages.

It's a real love letter to Houston talent and a chance for audiences to meet different talents. Please keep mixing it up. We see and appreciate the effort.

Amerikin continues through March 13 in the Alley's Neuhaus Theatre, 615 Texas Avenue. Proof of vaccination or negative COVID-19 test required. Masks are required. For more information, call 713-220-5700 or visit alleytheatre.org. $28-$57.
KEEP THE HOUSTON PRESS FREE... Since we started the Houston Press, it has been defined as the free, independent voice of Houston, and we'd like to keep it that way. With local media under siege, it's more important than ever for us to rally support behind funding our local journalism. You can help by participating in our "I Support" program, allowing us to keep offering readers access to our incisive coverage of local news, food and culture with no paywalls.
Make a one-time donation today for as little as $1.