Racist Backlash About Netflix's Sandman Casting Gets its Own Backlash Some people are really upset that she's going to play Death in Sandman. Screenshot Some people are really upset that she's going to play Death in Sandman.
Screenshot

When it was announced that Black British actress Kirby Howell-Baptiste would be playing the role of Death in Netflix’s upcoming adaptation of Neil Gaiman’s celebrated comic book series Sandman, the reaction from some corners of the internet was as vicious as it was predictable.

The Prince of Stories has been deftly fending off legions of misguided, racist fanboys for a week on Twitter with a truly admirable amount of kindness and patience. Over and over, they insist that Howell-Baptiste’s casting is a travesty for reasons that have nothing to do with her being a different race than Death was originally portrayed as in the comic.

Of course, it’s total bullshit as anyone who has read the comic should be able to tell. While, yes, Death is typically portrayed as a young white goth in the vast majority of her appearances, Gaiman has repeatedly shown that certain characters often take the form of whatever conception the viewer would be most comfortable with.

Her brother Dream, the titular Sandman, has shown up as a Black man, a cat, and a flower. Death herself took the form of a Chinese child in one of her regular days spent as a living person to better appreciate the lives she ends. There is nothing inherently white (or even human, as the character Cain remarks in one story later in the run) about an anthropomorphic personification of a function of the universe. 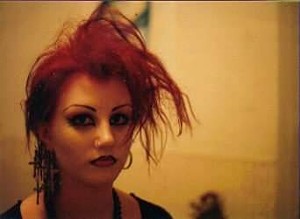 The late Cinamon Hadley, who partially-inspired Neil Gaiman's Death.
Photo by Aaron Shea
However, some particularly vile fans argue Death is different because she was based in part on a living person, Utah goth Cinamon Hadley. Artist Mike Dringenberg was a close friend of Hadley’s and asked if he could draw her to send to Gaiman as an idea for Death.

Hadley’s pale skin, thick eyeliner, and wild, black hair struck a chord with Gaiman and cemented the character’s look. Later when she was staying here in Houston, another friend of Hadley’s told her about Sandman, and Hadley was delighted to see an inked-over photograph of herself in Issue #11. 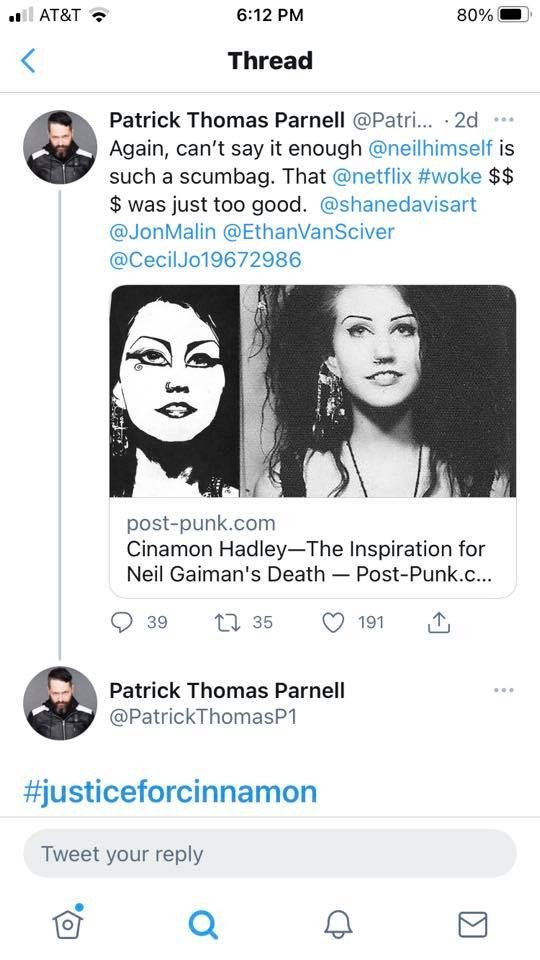 You'll notice that the people supposedly fighting for Cinamon's memory have spelled her name wrong.
Screencap from Twitter
Sadly, three years ago Hadley passed away from cancer. Her passing left a tremendous hole in the goth community, as it could reasonably be argued that she was one of the foremost aesthetic trailblazers through her inspiration of Death. Some people are claiming that casting a Black woman is spitting on Hadley’s memory. That’s led to a backlash from people who knew her.

“She’d be furious. Absolutely furious,” says Tracy Hyland Painter, who knew Hadley since 1988. Hadley also lived with Painter briefly when she moved back to Salt Lake City in 2010. “That is not who she was. It would make her sick to see people behaving like this and using her to defend being racist.” 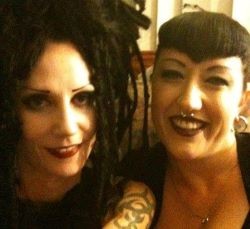 Hadley (L) with her friend and roommate Tracy Hyland Painter in Austin.
Photo by Tracy Hyland Painter
Another former roommate of Hadley’s from Utah, Aaron Shea, finds the backlash completely bizarre. The two had known each other since they were both 18. He fondly recalls a day when they were both walking back from watching Independence Day fireworks and catcallers screamed at them that it wasn’t Halloween. Hadley screamed back, “Every day is Halloween.”

“She would think it was weird,” says Shea of the racist reactions to the casting. “She was a genuinely nice person. She would be bewildered by all this, as we all are. It's frustrating. I can understand where these people are coming from but we're talking about a fictional character. Cinamon would think that Neil's pick for Death would be awesome and would be honored to mentioned in the same breath.”

The picture that her friends paint of Hadley is of an incredible soul who maintained her cheeky outlook on life up to the very end. Painter has fond memories of days spent in pajamas drinking coffee, nights drinking wine watching Hadley’s favorite movie White Night, and seeing Hadley dance the ballet. The idea that anyone would use her name to bolster a racist culture war breaks her heart. 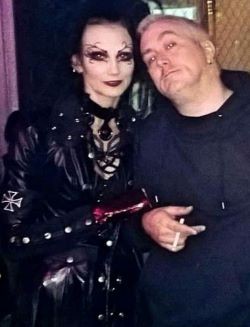 According to Shea (R), Hadley believed every day was Halloween.
Photo by Aaron Shea

“The backlash makes me sad. And angry,” says Painter. “Death is such a beautiful character, and the race of the person playing her shouldn’t matter…At a time when we should all be celebrating that this is finally happening, that that Neil is involved to make sure his vision remains true, and that there is this amazing cast bringing these characters to life, nothing else should matter.”

It’s a pity that Hadley did not live to see the iconic character she partially inspired finally brought to life on the big screen. On the other hand, it might be a mercy that she also missed seeing regressive assholes use her as a battle flag for yet another racist lost cause.
KEEP THE HOUSTON PRESS FREE... Since we started the Houston Press, it has been defined as the free, independent voice of Houston, and we'd like to keep it that way. With local media under siege, it's more important than ever for us to rally support behind funding our local journalism. You can help by participating in our "I Support" program, allowing us to keep offering readers access to our incisive coverage of local news, food and culture with no paywalls.
Make a one-time donation today for as little as $1.