Monthly Comic Book Titles Are Just Too Much Money/Hassle 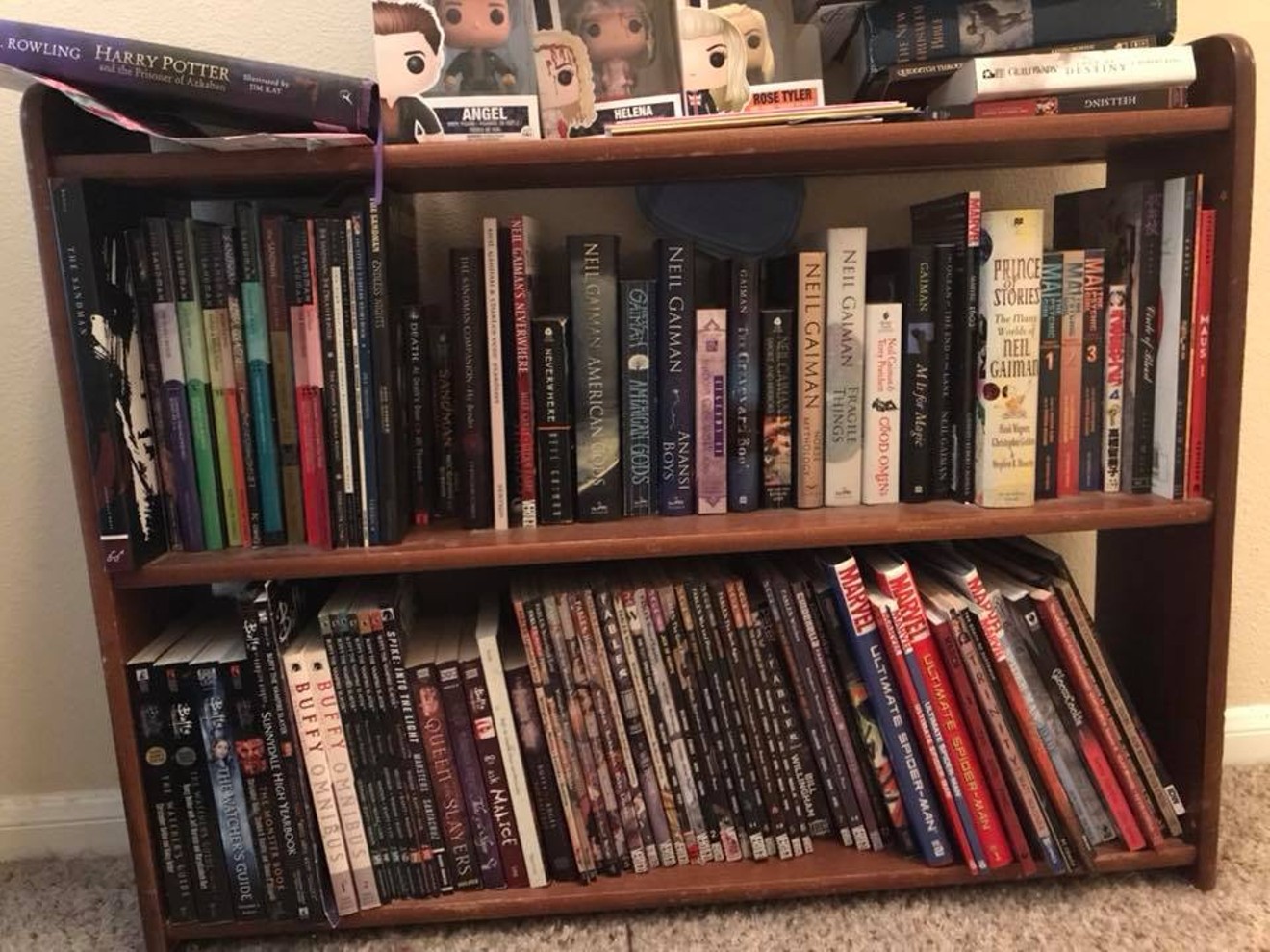 Part of my trade collection Photo by Jef Rouner
I used to run a monthly column here at Houston Press in conjunction with 8th Dimension where I would review various single comic issues of note monthly. I loved that column, and it introduced me to a lot of great books I still read today, but more and more I feel like the time of monthly books is passing. Frankly, it needs to.

The rise of the superhero movie juggernaut has led to an explosion of content available, but not necessarily content bought. In an interview with Publishers Weekly about declining sales, Julie Sharron, a staffer at the Secret Headquarters comic store in Los Angeles said, “There’s just too many [superhero] titles. People get overwhelmed, so it’s hard for customers to get into it. It seems like [superhero comics publishers] can’t figure out what people want.”

I can sympathize with her customers. Keeping up with superhero books has become a nightmare, especially if you’re a fan of staple heroes like Batman or anything involving the Avengers. It’s not to say you can’t pick a book and stick with it, but more and more they are tied to these massive interconnected universes that are designed to be consumed as a whole.

47 articles
It often takes great books and shifts them into park just as they are getting going. I was combing through my longboxes the other day and decided I wanted to delve back into Wolverine and the X-Men again. I loved that book. It had a great cast of charming lesser characters like Quentin Quire and Broo and a self-contained Saved by the Bell vibe that made it utterly endearing. I stopped reading because it got dragged into the whole Avengers vs. X-Men thing and sort of ground to a halt. Same thing happened with Batgirl and Red Hood when Death of the Family was going on.

That’s not to say that these giant events are bad. I loved Secret Wars for example, but it makes simply following a serialized format a constant battle to catch up on.

That gets expensive. Make no mistake, regularly subscribing to books is rapidly becoming a rich-man’s hobby. The average cover price for a single issue is just shy of $4 now. That’s not a lot if you’re just keeping up with, say, Saga every 30 days, but it adds up really quick once those crossovers start getting involved. One of the main reasons that I stopped buying monthly comics is that it became like missing a bill and trying to double up the next month. Eventually I finally gave up and decided to wait for the trade collections.

Trade collections are where the focus should be if you ask me. There’s certainly a place for single issues, of course. Some of my favorite stories are one-shots, and as promotional tools they are top-notch. That’s how I hope the comic industry starts thinking of them, though, as promotional materials. Rather than a marketing each issue as a self-contained part of an ongoing series, market the first issue as a demo from free or a very small fee.

Netflix has radically altered the concept of serialized entertainment for television, and I believe that concept has applied somewhat to the public mindset regarding comic books. More and more television story arcs are meant to be devoured as a whole instead parsed over the course of weeks or months. It’s still serialized, but it’s a serialized whole.

It would be nice if comics, particularly super hero comics, moved into that model. It’s a given that every four to six issues or so is going to be collected, but the collection is still viewed as the ancillary product compared to the monthly book. That makes creators beholden to ongoing sales rather than the total consumption of their vision and limits the storytelling format. Trades as the intended ideal of the comic book would ultimately be healthier for the genre.

My monthly books end up sitting in a box by my desk while my trades are prominently displayed in a shelf that is the first thing you see when you walk into my house. The trades are library where the issues are more trivia. I reread my trades as I do books far more than I ever re-read comics in issue format. My wife and I have the entire run of Skin and Earth, but we didn’t really feel like we truly owned it until I ordered the upcoming hardcover as a Mother’s Day present.

Monthly comics are a nebulous mess of interconnected points that are expensive to keep up with. Trades are crafted tales meant to be appreciated as they are. The industry would be better off focusing away from single issues.
KEEP THE HOUSTON PRESS FREE... Since we started the Houston Press, it has been defined as the free, independent voice of Houston, and we'd like to keep it that way. With local media under siege, it's more important than ever for us to rally support behind funding our local journalism. You can help by participating in our "I Support" program, allowing us to keep offering readers access to our incisive coverage of local news, food and culture with no paywalls.
Make a one-time donation today for as little as $1.