Ars Lyrica returns to in-person performance at the Hobby Center for the Performing Arts for their 17th season. Photo by Pin Lim
Though Ars Lyrica Founder and Artistic Director Matthew Dirst says the past pandemic-plagued year was “unusual to say the least,” there were some silver linings for the organization, like the global reach of their virtual programming.

Still, they are excited to return to the Hobby Center for the Performing Arts for their 17th season launching in September. Not only will it mark Ars Lyrica’s return to live audiences and in-person performances, it’s also a chance to present their scrapped 2020-2021 season, entitled “Turning Points,” in an almost identical fashion.

“Because we chose to focus on this concept of turning points, important events, or things that really changed our world for the coming season – without any knowledge that the pandemic would do just that,” says Dirst with a laugh, “we decided that we could logically keep the theme and continue to work with it. So that’s what we’ve done.”

The season opens at the Hobby Center on Friday, September 24, at 7:30 p.m. with an example of a point that turns for the better during Bach, Handel, and Hercules, a program featuring two different takes from two very well-known composers on, Dirst says, “a perhaps uncommon theme.”


“The story, of course, concerns Hercules, the fellow from mythology who has to choose between pleasure and virtue essentially. He’s faced with this choice in the form of a couple of characters, one of whose name is pleasure, the other whose name is virtue,” says Dirst. “They try to win his sympathies over the course of these libretti and, of course, he makes the right choice for virtue.

“It is the 18th century after all,” Dirst adds. “One can’t choose pleasure in a world that’s run by autocratic monarchs. You have to choose virtue.”

Though the source material for George Frideric Handel’s The Choice of Hercules and Johann Sebastian Bach’s Hercules at the Crossroads is the same, Dirst says Handel and Bach treat it “in similar though distinct ways.”

“It’s an interesting thing to contemplate these two major composers addressing the same story essentially, but doing so in subtly different ways with some beautiful music making,” says Dirst.

The season continues on November 13 with Eternity and the Underworld, a concert Dirst calls “an interesting experiment,” which pairs Johann Sebastian Bach's Cantata No. 82, Ich habe genug, with the Texas premiere of Jonathan Dove’s L’altra Eurydice (The Other Eurydice).

Written in 2001, Dove’s one-act opera is also new to Dirst, who is working with director Tara Faircloth to marry the contrasting pieces; one, a retelling of the Orpheus and Eurydice story – told from the perspective of Pluto, King of the Underworld – and the other, a cantata the Los Angeles Times says “provides a manual for how to die sublimely.”

On December 17, Ars Lyrica will visit the Museum of Fine Arts, Houston for the subscriber-only program Crossing Borders. According to Dirst, this “festive stew” of 17th- through 18th-century Spanish music, written by Central and South American and colonial composers, includes works that bridge “the sacred and the secular divide.” Meaning that the same libretto may refer to both the Baby Jesus and a good time, complete with wine, food, and parties.

Dirst admits that the text may seem “a little loony to our eyes,” but encourages audience members “to approach them with a fairly open mind.”

The program will also tour to New York, where Music Before 1800 will stream the broadcast from December 26 to January 9. More information about this virtual option will be posted here when tickets go live. 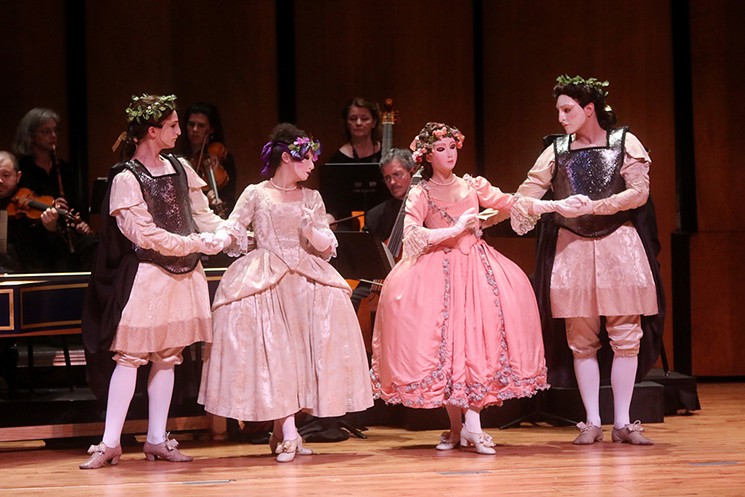 The New York Baroque Dance Company returns to Ars Lyrica for their production of Dido & Aeneas.
Photo by Pin Lim
The 2022 half of the Ars Lyrica season will kick off back at the Hobby Center with a concert centered on the man christened Chevalier de Saint-Georges by Louis XV, Joseph de Bologne, titled An Uncommon Chevalier.

Dirst attempted to schedule Bologne’s Violin Concerto in D Major, Op. 3, No. 1 three seasons ago, but violinist Cynthia Roberts’s bout of pneumonia nixed that plan. On March 27, Dirst will finally have the opportunity to reintroduce the piece from Bologne – the mixed-race son of a plantation owner and slave, and “perhaps the most famous violinist and conductor in Paris of his time,” Dirst says – to the Ars Lyrica audience “in the context of an evening one might have heard in the 1780s in Paris at the Concert Spirituel.”

Finally, the season will draw to a close the weekend of May 21-22, 2022 with a new, fully staged production of Henry Purcell’s opera Dido & Aeneas, a challenge Dirst will face with Catherine Turocy and the New York Baroque Dance Company.

“Dido & Aeneas is famously just a torso of an opera,” says Dirst, noting the missing prologue (which did not survive) and the places that call for a dance but no music remains. “You have to be a little inventive and willing to cobble together different solutions.”

Not only will staging two operas in one season keep the organization busy, they will also finally launch a separate, smaller-scale chamber series in Rienzi featuring music from Book 1 of Johann Sebastian Bach’s “The Well-Tempered Clavier.”

“It’s perfect for the kind of music that we do because it’s filled with 17th and 18th century art and antiques,” says Dirst. “We couldn’t ask for a better setting for the music of Bach.”

The series will also allow Dirst to show off one of his pandemic projects: learning “all the bits and pieces” of Book 1 that he’s never played before. The effort comes just in time for the 300th anniversary of the first book, coming up in 2022, and may be just one more small silver lining from the last year.

“It's kept me home practicing on a beautiful new instrument, and that’s been nice,” says Dirst.

For more information about Ars Lyrica’s 2021-2022 season, including season subscriptions and individual tickets, visit arslyricahouston.org. You can also call the Hobby Center for the Performing Arts Box Office at 713-315-2525. For information on safety protocols, visit the Hobby Center’s website here.
KEEP THE HOUSTON PRESS FREE... Since we started the Houston Press, it has been defined as the free, independent voice of Houston, and we'd like to keep it that way. With local media under siege, it's more important than ever for us to rally support behind funding our local journalism. You can help by participating in our "I Support" program, allowing us to keep offering readers access to our incisive coverage of local news, food and culture with no paywalls.
Make a one-time donation today for as little as $1.