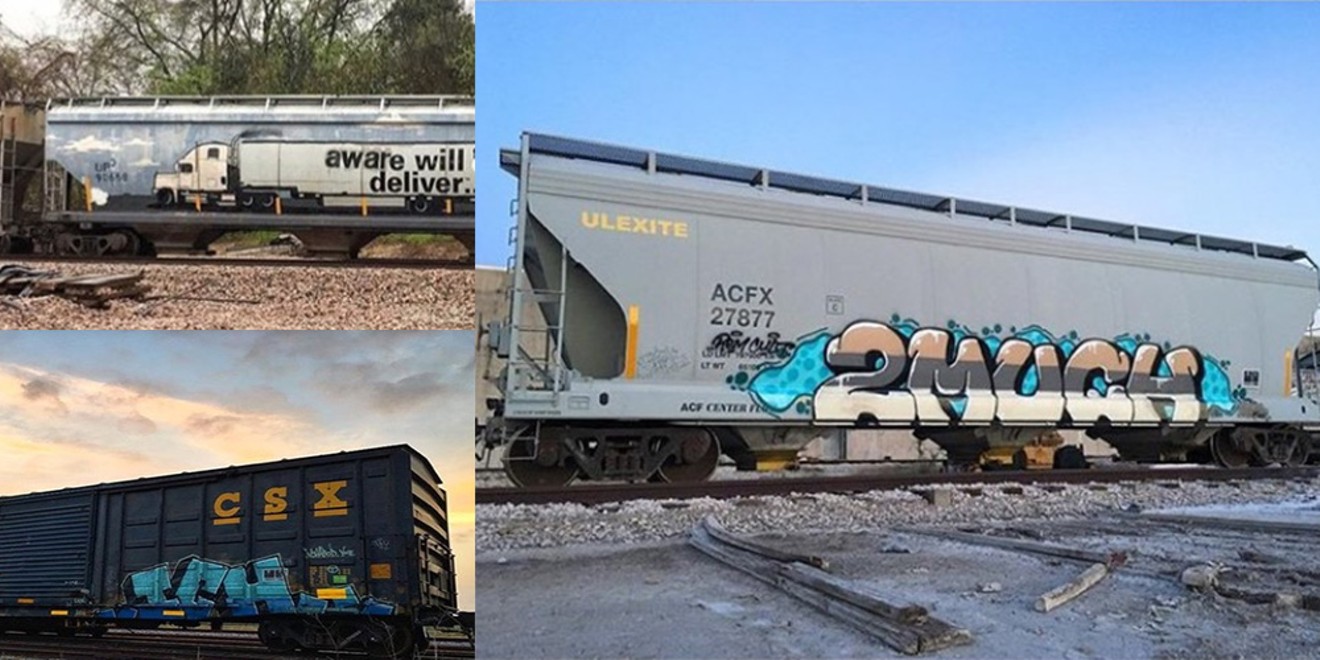 Benching is the art of photographing trains with graffiti. Photos Courtesy Ivan R./7houtx1grown3
Harvey's floodwaters might have done a lot of damage to Houston's railroad infrastructure, but one thing that didn't get washed away was the graffiti.

On its own, Houston is a great place for rail fanning, just geeking over moving trains or capturing videos to share on social media. A number of big railroads have yards here, and the area is both the main hub for train transport in the Gulf Coast region and a gateway to the West Coast.

My dad worked the rail yards his entire career and would tell me about these rail fans. He never spoke about the graffiti, though. It was just vandalism to him.

And, to a lot of people, that's just what painting on trains is, a way for someone to catch some fame, as they call it, or highlight the way they stack their letters. Another term for rail fanning is "benching," an actual practice that dates back to the days when New York City subways were notorious for having moving murals, before authorities locked that practice down.

Nowadays it's the industrial railcars that carry the art, and in the Bayou City, graffiti artists add their own touches to railcars, usually by crossing through gated rail yards (in other words, trespassing). Documenting their moves are the intrepid photographers who share the finished product.

"The trains I find most of the time are painted from people all over the nation. I rarely take moving train pics, because my phone won't catch them good. So, I just go to the yards I know, sneak in and take pictures and get the fuck out," says Ivan, a Houstonian who has been benching for around four years. He shares his photos on his Instagram account, 7houtx1grown3.

With railroad companies employing their own police force, it's a tricky slope trying to grab shots of resting trains. Ivan won't divulge his favorite spots, but does say you can catch a trespassing violation if you're caught snapping inside rail yards. "You just gotta be smart," he says. "I don't fear the violations because I'm just taking photos, not doing the actual painting."

He says he's gone benching as far as Galveston.

Social media helps curate images of benching and graffiti trains that pass through the area. The hashtag #houstonbench (or #texasbench) helps collect hundreds of images on Instagram.

Another photographer, who goes by O Texano, wouldn't talk to the Houston Press about benching, but shares tons of images on both his Flickr account and Instagram. And just to prove the point that benching is a thing, there's even a documentary in the works on the trend in North America.

Tales From The Rails Intro from Monty Nielsen on Vimeo.

For a lot of people who live in Houston, our proximity to the commercial rail industry is a blessing and a curse. Sometimes hitting the streets in a rush comes to a standstill when the gates go down on a railroad crossing; just as you're getting to where you have to go, a train with what seems like an endless stream of railcars goes by. Marking some cars are various skill levels of graffiti. It's not all great.

"A lot of people think of graffiti as trash, gang-related or just plain vandalism," Ivan explains. "The beauty about the trains is that they are rolling canvases to the guys and gals who paint."

Camilo Hannibal Smith started writing for the Houston Press in 2014. A former copy editor, he was inspired to focus on writing about pop culture and entertainment after a colleague wrote a story about Paul Wall's grills. His work has been published in the Los Angeles Times and the Source magazine.
Contact: Camilo Hannibal Smith