The Galveston Historical Foundation presents the 49th Annual Dickens on The Strand. Photo by Koby Brown Photography
December is here and wouldn’t you know it by looking at this week’s best bets. More Houston holiday traditions return around town (and over in Galveston), but we’ve also got a Donizetti comedy set in the 1950s and a festival devoted to Latinx voices. Keep reading to see out top picks for the coming week.

Check out the Alley Theatre’s new version of their annual holiday show, A Christmas Carol, which officially opens on Thursday, December 1, at 7 p.m. Artistic Director Rob Melrose, who was tasked with creating a new version of Charles Dickens’s classic tale back in 2018, recently told the Houston Press that he eventually “landed on magic, music and Dickens.” In addition to 15 traditional carols, 21 different locations (up from the usual three) and illusions created by Jim Steinmeyer that are “more the kind of effects you'd see in a magic show,” Melrose’s adaptation is also a bit more family friendly. “I think our old version was really about being creepy and scary,” said Melrose, adding “this version is about getting Christmas started.” Performances continue at various times including 7 p.m. Tuesdays through Saturdays, 1 and 6 p.m. Sundays and 2 p.m. Saturdays through December 30. Tickets can be purchased here for $26 to $121.

Speaking of Dickens, it’s time to make the pilgrimage to Galveston this weekend for the 49th Annual Dickens on The Strand. The Galveston Historical Foundation again celebrates Charles Dicken’s work by utilizing downtown Galveston's Victorian-era architecture to transport attendees to 19th-century London. There, you’ll find parades, musicians, jugglers, carolers, costumed vendors and, of course, descendants of Charles Dickens himself. The festivities begin Friday, December 2, from 5 p.m. to 9 p.m. and continue on Saturday, December 3, from 10 a.m. to 9 p.m. and Sunday, December 4, from 12 to 6 p.m. Tickets are $20 for adults, $14 for kids, and remember that guests in Victorian costumes get 50% off. You can nab tickets here or at the gate. There are also special ticketed events, such as handbell concerts and walking tours, and even a Dickens VIP, which you can find more information about here.

We’re guessing the title Sexo Y Tortillas: The Musical alone will convince you to check out TEATRX’s 4th Annual La Vida Es Cortos/Life is Shorts, a festival of short plays and films that showcase Latinx creators and stories, but allow us to say more. In addition to the world premiere one-act musical, you can expect three short plays and a diverse lineup of short films. Of the festival, TEATRX’s Marissa Castillo told the Houston Press, “You have love stories, you have stories of family, stories of people trying to keep their dreams alive…They’re told from the Latinx lens, but they are universal stories that will resonate with anyone who comes to watch.” The festival is scheduled for 7:30 p.m. Friday, December 2; 2:30 and 7:30 p.m. Saturday, December 3; and 2:30 p.m. Sunday, December 4, at The MATCH. Tickets are pay-what-you-can (starting at $10) and can be purchased here.
For the last 70 years, John Williams has scored much of our movie-going experience, crafting the soundscape of worlds as varied as one “a galaxy far, far away” to the Hogwarts School of Witchcraft and Wizardry. The Houston Symphony will feature the award-winning composer – and that’s many, many awards including Grammys, Oscars and Golden Globes – and his musical contribution to Christmas when they play Chris Columbus’s Home Alone – Film With Live Orchestra. Listen as Williams borrows the celesta, famously used in the “Dance of the Sugar Plum Fairy,” to add a little mystery to the McCallister home; parodies Tchaikovsky’s Trepak while the McCallisters rush to make their flight after oversleeping; and contributes a new Christmas standard, “Somewhere in My Memory,” which serves as the film’s main theme. The concert is scheduled for Saturday, December 3, at 2:30 and 7:30 p.m. at Jones Hall, and tickets can be purchased here for $34 to $165.

Remember when Gloria Gaynor tweaked her hit song, “I Will Survive,” in the aftermath of Hurricane Harvey? As if she needed any more goodwill after being responsible for the original. Still, you can shower her in appreciation on Saturday, December 3, at 6 p.m. when Gaynor headlines the Mayor’s Holiday Spectacular at Hermann Square at City Hall. Though Gaynor will headline, the evening’s lineup has even more to offer as Dance of Asian America, Houston Contemporary Dance Company, Mariachi Luna Llena, and more are set to grace the stage. Of course, Santa and Mrs. Claus will be making an appearance, too, and you won’t want to miss the big show: the lighting of the tree, towering at more than 55 feet tall and adorned with thousands of ornaments and hundreds of thousands of lights, by Mayor Sylvester Turner. 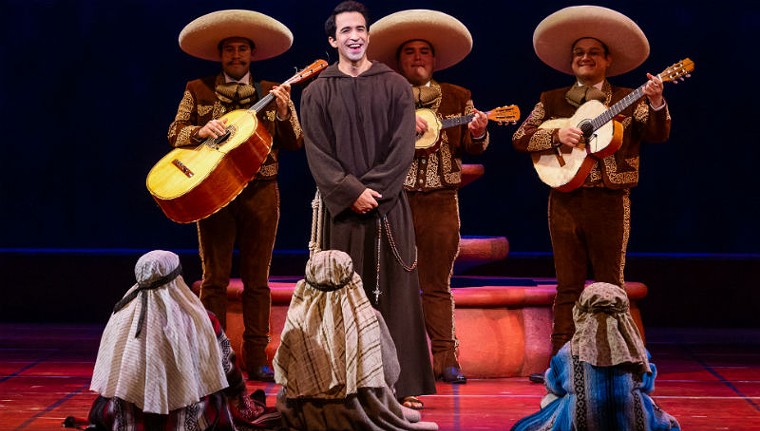 Performers from Houston Grand Opera's holiday production, El Milagro Del Recuerdo, will stop by Discovery Green to sing during Carols on the Green.
Photo by Lynn Lane
Houston Grand Opera’s holiday production, El Milagro Del Recuerdo (The Miracle of Remembering), is right around the corner, but if you just can’t wait until December 8 to see the mariachi opera, you can get a preview when HGO visits Discovery Green for their annual sing-along, Carols on the Green, at 7 p.m. on Saturday, December 3. Soloists from the HGO-commissioned opera will perform music from the production along with a selection of holiday songs in English and Spanish. Along with soloists, you will also hear from the HGO Chorus, the HGO Studio, the HGO Bauer Family High School Voice Studio, Segundo Barrio, and Trio Chapultepec. Trio Chapultepec is the mariachi ensemble that will also be performing in the upcoming production of El Milagro del Recuerdo. The sing-along is family-friendly and, even better, free and open to the public.

After almost losing their home base, on Saturday, December 3, at 7:30 p.m. Opera in the Heights will open the first live performance of their 2022-2023 season with Gaetano Donizetti’s Elixir of Love back in longtime home Lambert Hall. Opera in the Heights, in collaboration with Josh Shaw of Pacific Opera Project, will take Donizetti’s comedy to the 1950s, complete with “diner and jukebox-inspired set.” Artistic Director and Conductor Eiki Isomura recently told the Houston Press that the setting makes sense “because it is about young love,” adding that teenagers, rock music, and the dance fads of the era “feed really well into the energy of the piece." Performances will continue at 2 p.m. on Sunday, December 4, and Sunday, December 11, and at 7:30 p.m. on Friday, December 9. Tickets can be purchased here for $42.50 to $87.50.

If your only exposure to George Frideric Handel’s Messiah is from the frequent use of the Hallelujah chorus in media – you’ve heard it everywhere, from Dumb and Dumber to car commercials – then do yourself a favor and experience the majesty of the work on Saturday, December 3, at 8 p.m. when Mercury Chamber Orchestra presents Handel’s Messiah at the Wortham Theater Center. Conductor and Artistic Director Antoine Plante will lead the orchestra in this “fixture of the Christmas season,” the first part which “prophesied the birth of Jesus Christ; the second exalted his sacrifice for humankind; and the final section heralded his Resurrection.” Mercury will perform the concert a second time on Sunday, December 4, at 2:30 p.m. Tickets for either performance can be purchased here for $10 to $76. The concert will also be available online, and you can purchase virtual access for $20 here.
KEEP THE HOUSTON PRESS FREE... Since we started the Houston Press, it has been defined as the free, independent voice of Houston, and we'd like to keep it that way. With local media under siege, it's more important than ever for us to rally support behind funding our local journalism. You can help by participating in our "I Support" program, allowing us to keep offering readers access to our incisive coverage of local news, food and culture with no paywalls.
Make a one-time donation today for as little as $1.