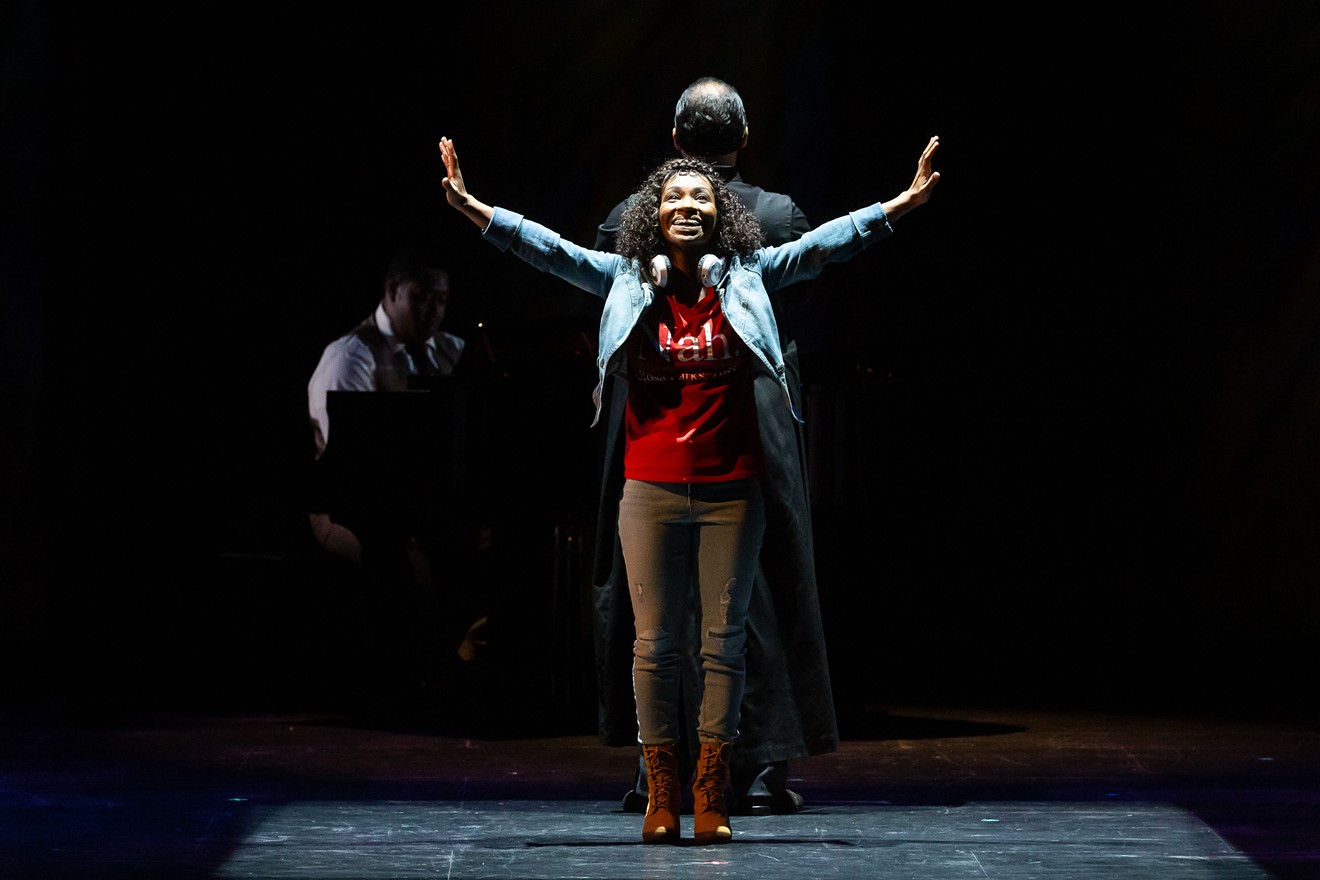 Houston Grand Opera will release Marian's Song via HGO Digital on Friday. Photo by Lynn Lane
We’re back with another list of best virtual bets. Cinco de Mayo is quickly approaching and we got you covered there, but there’s also a little something for film buffs, dance lovers, classical music aficionados, and more. Keep reading to see some of the best virtual (and socially distanced) events Houston has to offer this coming week.

Celebrate International Dance Day by checking out In Good Company, a series of dance films choreographed by Houston Ballet Artistic Director Stanton Welch to the music of The Dead South. If you haven’t been following along, the Houston Ballet has been releasing the short dance films – 11 in total and each set to a track from the Canadian acoustic quartet – weekly, and yesterday marked the release of the final installment. You can view all the films of In Good Company on the Houston Ballet YouTube channel.

Houston Poet Laureate Emeritus Deborah D.E.E.P. Mouton’s “clear-eyed and quietly confrontational” libretto and Damien Sneed’s “warm and inspiring” music combined last February to make chamber opera Marian’s Song, about based on the life of Marian Anderson, one powerful tribute. The Houston Grand Opera’s 68th world premiere will now be released on Friday, April 30, at 7:30 p.m. on HGO Digital as a new, filmed version featuring the original cast from the world premiere. The hour-long show, which you can read more about here, will be available to stream free for one month following Friday’s release. You can also make your way to Miller Outdoor Theatre on Friday, May 14, and Saturday, May 15, when HGO presents the work for two free, in-person performances. Tickets to the in-person show will be available on May 7, or you can also stream it on the Miller Outdoor Theatre website, YouTube channel, or Facebook page.

Step back 300 years into the past when the Bach Society Houston performs Baroque masterworks within the galleries of the Museum of Fine Arts, Houston, on Saturday, May 1, at 4 p.m. during Music from the Museum. Surrounded by contemporaneous artworks, the Bach Society Houston Orchestra will play Antonio Vivaldi’s Concerto for Four Violins in B Minor and two works by Johann Sebastian Bach, his Violin Concerto in E Major, BWV 1042, “a creation of purest Bachian splendor,” and Violin Concerto in A Minor, BWV 1041, a concerto that “has become one of the cornerstones of the violin repertoire.” You can stream the free, hour-long concert, which includes commentary from curator of European art and president of the Bach Society Houston board of directors Helga K. Aurisch, here.


Join Asia Society Texas Center on Saturday, May 1, at 7 p.m. when they kick off Asian Pacific American Heritage Month with Sheng Wang. The self-described “joke-teller,” who has performed stand-up on NBC shows Last Comic Standing and Late Night with Jimmy Fallon, as well as served as a writer on ABC’s Fresh Off the Boat, will converse with Jessica Green, the artistic director of the Houston Cinema Arts Society, during the live conversation. You can purchase a ticket here ($20 for Asia Society Texas Center and $30 for non-members) to hear Wang, whose style is “very observational,” with “mostly personal observations and some tiny anecdotes.”

This weekend the Houston Symphony’s own Principal Percussionist, Brian Del Signore, will make his solo debut with a movement from his own Percussion Concerto during Brian Del Signore Plus Brahms. The concert also includes Pulitzer Prize-winning composer Jennifer Higdon’s “Celestial Blue,” from Dance Card, a work reminiscent of Benjamin Britten, whose Sinfonietta, Opus 1, joins it on the program. Rounding out the evening is Johannes Brahms’s Serenade No. 2, of which the “lilt, the warmth, the gracious melodies, and the enlivening cross rhythms” make it “immediately recognizable” as Brahmsian. Performed live from Jones Hall, you can purchase an in-hall ticket for one of the weekend’s shows or you can pick up a $20 ticket to view the livestream on Saturday, May 1, at 8 p.m.


Cinco de Mayo might not be until Wednesday, but you can start celebrating the Mexican army’s 1862 victory over the French starting on Saturday, May 1, at 8 p.m. when the Mariachi Divas de Cindy Shea take the stage at Miller Outdoor Theatre. Trumpet player Cindy Shea founded the Mariachi Divas in 1999, and since then the all-female ensemble has racked up about a dozen Grammy and Latin Grammy Award nominations and two wins for Best Regional Mexican Music Album. Tickets to watch the ensemble in-person have already been distributed, but you can still watch from home for free on the Miller Outdoor Theatre website, YouTube channel, or Facebook page.

On Saturday, May 1, at 8:30 p.m. the Houston Museum of African American Culture will restart their popular “Movies at Sunset” drive-in screenings with the Houston premiere of Shantrelle P. Lewis’s In Our Mothers’ Gardens. The film, distributed by Ava DuVernay’s ARRAY film collective, “celebrates the strength and resiliency of Black women and Black families through the complex, and often times humorous, relationship between mothers and daughters.” Featuring interviews with #MeToo founder Tarana Burke, Rutgers University cultural critic Dr. Brittney Cooper, NPR’s Senior Director for Programming Yolanda Sangweni and more, this movie is here just in time for Mother’s Day. Gates will open at 8 p.m. and you can purchase a ticket, $10 per vehicle, here.

Stream the Xfinity Cinco de Mayo Cultural Festival, filmed at Discovery Green, this Sunday.
Photo by Floyd Willis
Speaking again of Cinco de Mayo, you can also join a virtual celebration filmed at Discovery Green. The Xfinity Cinco de Mayo Cultural Festival is a pre-recorded program streaming on Sunday, May 2, at 5 p.m. with performances from the Kinder High School for the Performing and Visual Arts (HSPVA) Mariachis, Danzas Folkloricas de Solei, and Nick Gaitan, along with the folks at The Grove at Discovery Green sharing some tips for a great ginger margarita. The free 20-minute presentation will stream here and on the Discovery Green Facebook page. You can also register here to receive an email with a link to watch the program when it becomes available.
KEEP THE HOUSTON PRESS FREE... Since we started the Houston Press, it has been defined as the free, independent voice of Houston, and we'd like to keep it that way. With local media under siege, it's more important than ever for us to rally support behind funding our local journalism. You can help by participating in our "I Support" program, allowing us to keep offering readers access to our incisive coverage of local news, food and culture with no paywalls.
Make a one-time donation today for as little as $1.