Renata Hinrichs as herself in Random Acts. Photos by Mitch Traphagen
The virtual theater stages are buzzing this week with new offerings, but don't fret opera, music and film lovers. You don’t need to feel left out either. Check out this week's list of best bets below.

Last chance, and we mean last chance, to catch the Fade to Black Play Festival, Houston’s only short play festival featuring new works from African American playwrights. The festival, presented by Shabach Enterprise, is online for the first time this year, but tomorrow, Friday, January 22, is the last day to pick up a ticket. The $20 ticket will get you a 48-hour rental to enjoy the ten short plays spotlighted this year, which includes one, Raising Solomon, from Crystal Rae, winner of the 2020 Houston Press Theater Award for Best Actress.

4th Wall Theatre Company opened Renata Hinrichs’s one-woman, autobiographical show Random Acts yesterday, January 20. The daughter of a Protestant minister sent to a church on the south side of Chicago, Hinrichs details her experiences growing up in the midst of the civil rights movement, telling “true-life stories with an easy mix of cleverness and charm, wisdom and innocence.” Tickets for the on-demand show, which will stream through February 7, are flexibly priced and available here. For more on Random Acts, check out co-artistic directors Philip Lehl and Kim Tobin-Lehl in conversation with Hinrichs and the show’s director, Jessi D. Hill, on last week’s episode of Beyond the 4th Wall.

Houston Grand Opera presents Giving Voice as part of the HGO Digital season.
Photo by Lynn Lane
During tenor Lawrence Brownlee’s stopover with the Houston Grand Opera for their 2019 production of The Pearl Fishers, the bel canto star was inspired by the diversity that surrounded him, so much so that he later pitched an inclusive concert that would feature “a blend of music traditions.” The result, Giving Voice: Lawrence Brownlee and Friends Sing Opera, Gospel, and Standards, premiered to a sold-out audience a year later and returns to HGO – HGO Digital, that is – this Friday, January 22, at 7:30 p.m. Joining Brownlee for the new (and free) installment is HGO stalwart Nicole Heaston, who talked with the Houston Press about sharing co-hosting duties with Brownlee as they lead a group of Black opera stars, including four current HGO Studio artists, in a diverse, wide ranging repertoire.

On Friday, January 22, the Museum of Fine Arts, Houston, will open their longest running film festival, the Festival of Films from Iran, online. The curated, digital edition of the festival, will feature seven films, including Careless Crime by director Shahram Mokri, who will participate in a virtual conversation on February 4, and Mohammad Rasoulof’s There Is No Evil. Rasoulof, who earned a lifetime ban from filmmaking and a year-long prison sentence in Iran after releasing A Man of Integrity in 2017, presents “a series of Kafkaesque moral parables about Iran’s death penalty and its perpetrators, made in open defiance of the restrictions the government put on him.” The festival will run through February 7, and tickets are $10 per film or you can purchase a festival pass for $55 here.

While The Stronger, the first of three short plays from new translations by the Alley Theatre’s Artistic Director Rob Melrose, is still streaming (through February 7, in case you’re wondering), this Friday, January 22, the Alley opens the second: August Strindberg’s A Half Sheet of Paper. The second featured Strindberg play stars company member Chris Hutchison as a man who finds himself traveling down memory lane after discovering a bit of well-used paper as he’s about to move from his apartment. A Half Sheet of Paper will be available through February 14, and the final work of the series, a translation of Luigi Pirandello’s The Man with the Flower in His Mouth, will open February 12. All three plays are free with registration here.

Join Evil Dead fans from around the world on Saturday, January 23, at 8 p.m. when Society for the Performing Arts presents Evil Dead: With Live Commentary from Bruce Campbell. Sam Raimi’s 1981 horror classic, known for its gore and inventiveness, has spawned quite the franchise, encompassing multiple films, a television show, comic books, merchandise and yes, a musical. Ash himself, Bruce Campbell, will be on hand to provide live commentary during the film and take questions from an audience chat. Tickets start at $25 here, and you get the livestream and video on-demand for 48 hours after the show.

Houston-based ensemble Kinetic will take a stab at a new string arrangement of Johann Sebastian Bach's “beautiful keyboard work” the Goldberg Variations, a work described as “Rubik's Cube of invention and architecture,” during their first concert of 2021 titled Quiet Art. Setting the stage for Bach will be the titular Quiet Art, a string quartet “about the solitude in which artists work” by Jennifer Higdon. The program, curated by violinist Natalie Lin Douglas, will be livestreamed from The MATCH on Sunday, January 24, at 7:30 p.m. and will be available on demand through February 7. Tickets are pay-what-you-can with a suggested price of $25. You can pick one up here. 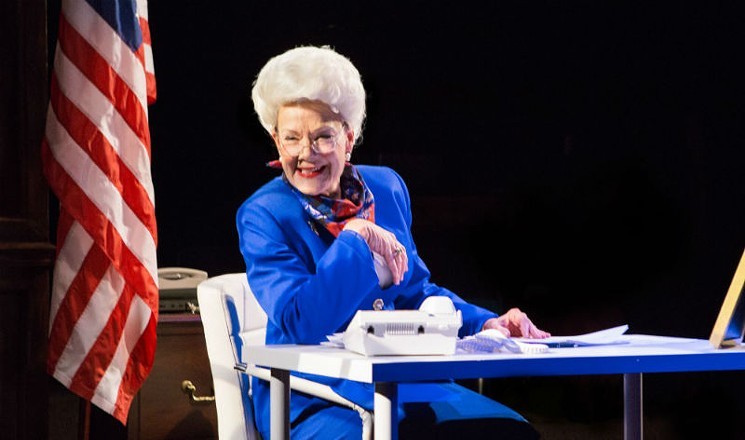 Houston favorite Sally Edmundson plays the titular character in Ann during the latest release of Stages virtual season.
Photo by Os Galindo
Two fan favorites return to Stages, albeit this time to their virtual stage, on Tuesday, January 26, when they open Holland Taylor’s one-woman show Ann, starring Sally Edmundson. Edmundson, who played the former Texas governor, Ann Richards, in Stages’ 2018 production, had just reprised the role for the Fayetteville, Arkansas-based TheatreSquared when coronavirus struck. Luckily, they were able to film the production, so Houston audiences can again watch Edmundson bring “the tartness and heart” while she “slips under Richards' skin with a flair that's downright magnetic.” Ann will run daily at 7:30 p.m. with additional performances at 2 p.m. on Saturdays and Sundays from January 26 through February 7. Tickets can be purchased here for $25.
KEEP THE HOUSTON PRESS FREE... Since we started the Houston Press, it has been defined as the free, independent voice of Houston, and we'd like to keep it that way. With local media under siege, it's more important than ever for us to rally support behind funding our local journalism. You can help by participating in our "I Support" program, allowing us to keep offering readers access to our incisive coverage of local news, food and culture with no paywalls.
Make a one-time donation today for as little as $1.