Bogie and Bitcoin: A Classic Film's Take on the New Gold Rush 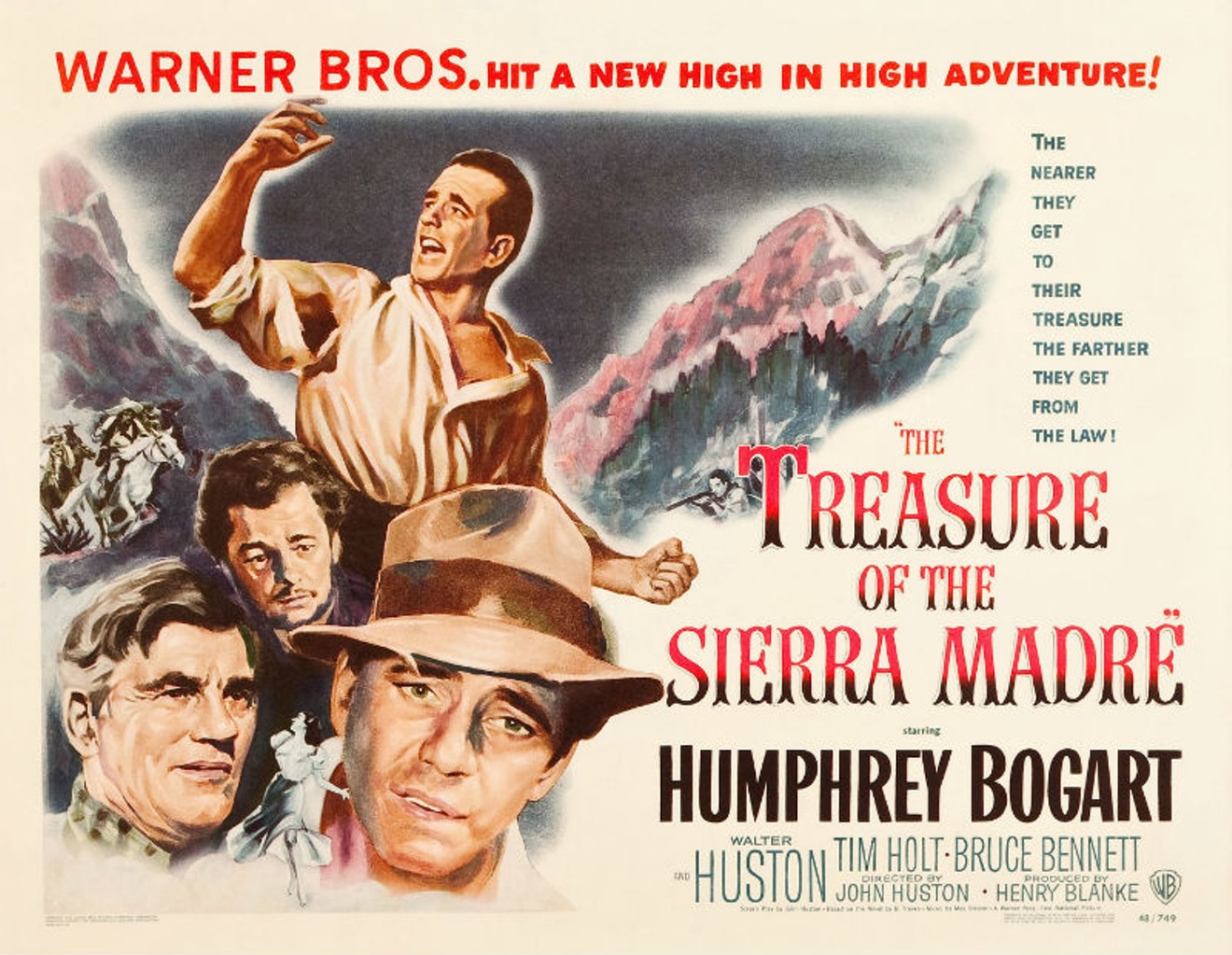 
“…when the piles of gold begin to grow, that's when the trouble starts.”

So pondered Howard, a grizzled, astute and fictitious prospector in Tampico, Mexico nearly 100 years ago. The old man urged those listening to heed his advice on how sudden riches might change any person fortuitous enough to happen upon them.

“I know what gold does to men's souls,” he warned.

Howard is a character in the 1948 classic, “The Treasure of the Sierra Madre.” The Oscar-winning film is returning to select theaters this weekend in honor of its 70th anniversary. If you think a movie about hapless gold miners seeking fortune at the turn of the 20th century has no relevance in these modern times, maybe you’re not keeping up with the present-day gold rush.

A recent report says more than 100,000 users a day are joining cryptocurrency trading platforms. To put it crudely, cryptocurrency is digital money. You might refer to it as Bitcoin, the way some folks call all soda pops Coke. It’s basically a digital asset designed to facilitate trading between users. Cryptography secures and verifies the transactions. It’s appealing because it can include everyone in its financial system. Banks aren’t necessary, governments aren't involved and users are afforded anonymity with their purchases.

Will Bitcoin be the next eureka commodity?
Photo by Jonathan Waller, Flickr Commons
And right now, it’s booming. Cointelegraph.com follows trends in the market and reported that one of the world’s leading cryptocurrency exchanges added more than 250,000 users in a single day recently, causing the exchange to suspend new additions to focus on existing users and hire more staff to handle the demand. The demand is high because Bitcoin, one of the first forms of cryptocurrency, surged in value late last year. With this week's news that Kodak – a known, mainstream player - is getting involved in the market, values for Bitcoin and alternative cryptocurrencies are expected to continue to climb this year.

So, there’s a gold rush, one reminiscent of the events portrayed in the film. The movie won a trio of Academy Awards, including nods for screenwriting, directing and best supporting actor. The legendary John Huston walked away with two of those Oscars. His father, Walter,  won for his portrayal of the wise and wary prospector, Howard.

A quick plot summary goes like this: Howard meets Fred C. Dobbs and Bob Curtin, a pair of down-on-their-luck day workers (including leading man, Humphrey Bogart, as Dobbs) who’ve been duped of their paychecks while working for a sleazeball in Mexico. Howard has a bead on a motherlode somewhere in the Mexican mountains. Dobbs comes into an unexpected windfall and he and Curtin get the money they were owed by beating the daylights of out the sleazeball. With these pooled funds and Howard’s know-how, they set off to find their bonanza, which they agree to split evenly. A synopsis of a film so old your great-grandparents saw it on its initial release probably doesn’t require spoilers, but we’ll save some of the fun for anyone who’ll visit the theater this weekend or next week to see the movie in all its Oscar-winning glory on the big screen.

It’s absolutely worth it. In it, you get a treatise on greed and human nature, as well as a 70 year-old film addressing very modern themes. The movie is ranked 30th on AFI’s list of the 100 greatest American films. It gave us an iconic line, paraphrased over time into, “Badges? We don’t need no stinkin’ badges.” That line definitely applies to today’s cryptocurrency. It may be all the rage, but it’s still a wild west economy, unregulated and volatile. It’s prone to crazier mood swings than a Cancer during a new moon. Forbes Magazine’s Panos Mourdoukoutas spoke to cryptocurrency’s current bullishness last week, sounding a lot like Howard, the not-so-foolish old fool.

Once gold was found out west in the 1800s, people left everything behind and wagon-trained to see if they could improve their lot in life. It was an early example of “FOMO,” – fear of missing out – and FOMO is a major driver in the present day, Bitcoin gold rush. And any gold rush is exciting.  Adventurous souls like Dobbs and Curtin who are looking to spark economic change are driving today's crypto-craze. There’s even a tool called a “Bitcoin miner.” Explaining exactly what it does is better left to economists, but it's basically software that seeks out Bitcoin, which has proven as elusive as finding payloads in the mountains, via advanced algorithms and such. These miners aren’t cheap, they cost thousands of dollars on average, a lot more than your standard pickaxe and shovel.

I’ve chatted with some modern-day Dobbses and they say crypto is the way to go. Investing early, and in the right form of cryptocurrency (there are currently about 20 alternatives to Bitcoin), could prove profitable down the line. At the least, you’re not having to deal with governmental controls over your exchanges. And, they say, the bigger the interest, the more traditional merchants will have to respect its purchasing power and offer their wares for crypto trading. It’s an enthralling thing to ponder; or, as Fred C. Dobbs put it, “I think I’ll go to sleep and dream about piles of gold getting bigger and bigger and bigger.”

"The Treasure of the Sierra Madre" returns to select theaters Sunday, January 14 and Tuesday, January 16, in honor of the film’s 70th anniversary. Check the Fathom Events page for a theater screening the film near you.