In the world of stand-up comedy, anyone who manages acts or books them, would tell you to make your act as universal as possible. While that idea was probably great at one time, being who you are and speaking to an audience who mirrors you doesn't mean you're left to a life of playing small rooms either. No other touring comic displays that ideal better than Brian Posehn.

For 30 years Posehn has made the rounds as a touring comic, and his off-beat nerd styled humor hits hard with anyone who hears it, especially those who like wrestling, metal, D&D, and Star Wars. Last year Posehn dropped the hilarious album 25x2 and proved he can speak to larger audiences while indulging in plenty of nerdy topics at the same time. On May 11 he'll bring those jokes and more to Houston. The Houston Press was more than happy to chat with him about the past, the present, and what we can expect from him at his Houston date.

It would be one thing if Posehn was just a stand-up comic, but he's done so much more over the years. His acting gigs include appearances on shows including Just Shoot Me, News Radio, Mr. Show, and a recurring role on The Big Bang Theory. He's done voice over gigs on Mission Hill, Metalocalypse, and Tom Goes To The Mayor.

Asked if it ever gets easier being a comic in a world full of comedic actors trying to be comics, Posehn says: "Easier? I dunno about easier, but it's different. There are negative parts of being a road comic, I've been at it 30 years now and I never thought I'd be one of the old comics. No matter what, it's a job in some respects. Sometimes I feel like a businessman at all of the Hub airports, seeing the same people on flights."

Brian Posehn has even penned work for Marvel Comics.
Art courtesy of Generate Media
Recently Posehn alongside Jerry Duggan, was tapped to write several books in the Deadpool series by Marvel comics. When asked how any of this came to be, Posehn says, "I've gotten lucky to get to dabble in other things. I got the Deadpool series basically because I was around and hanging out. Jerry Duggan and I had done the Last Christmas book for Image Comics, and the Marvel guys knew us from that and from being at the cons. The Deadpool thing was cool, I did three years on it and Jerry did another two years after me. We basically wrote the first year arc, story ideas, and then pitched it and got it. I have an independent thing I wanna' do first, but after that I'd like to maybe work with the guys over at DC Comics. When I did Deadpool it was surreal, because I got to work with all of the other characters like Spiderman and Wolverine."

And this is all before we start digging into another love that Posehn has, the world of metal music. Known as a massive fan of older metal from the likes of Dio, Black Sabbath, and Iron Maiden, it made us wonder what he thinks of newer acts like The Sword and Mastodon, as well as what he thinks about Slayer calling it quits.

"Yeah, at this point I really love Mastodon, and I've been friends with a couple of the members for a while now. I liked The Sword when they first came out, and I like bands like Red Fang, Huntress, Holy Grail cause' they sound like they could've been signed in 1987. I like this band Visagoth cause' they're perfect for D&D nerds, and Powertrip. On Slayer, it makes sense. You have to stop eventually and it's like Seinfeld, you're deciding when you go out."


As far as comedy goes, though it premiered on the now defunct network Seeso, Posehn's last special 25x2 from last year is one of the funniest comedy specials to drop in 2017. Full of jokes about wrestling, Star Wars, and many other nerd topics, the special will make anyone laugh, though it feels like it's being focused on a particular audience. "Yeah, I play to a lot of me's. Some guys who ate better than me, some who didn't, there's a lot of facial hair and black shirts in my crowds like me from alternate universes. But I have a lot more female attendees at my shows than you'd think. It's definitely grown over the years," remarks Posehn.

And while he's opening up to newer crowds all the time, Posehn still keeps things close to the chest, especially on his successful podcast, Nerd Poker. Navigating the world of Dungeons and Dragons, Posehn and friends play the game throughout the podcast, which is much more entertaining than I can describe.

"I know we have an audience. With a lot of what I do, I figure it's not for everyone," he says. "All I wanted from the podcast is to be able to pay my buddy to be the dungeon master, because he has a family and there's a lot of preparation that goes into doing that. So, to be able to pay him and be able to buy beer and whiskey and food for us to eat while we play, it's a success for me. We always wanted it to be for those who play as well as for those who've never played before ever, and we seem to get both in our audience." 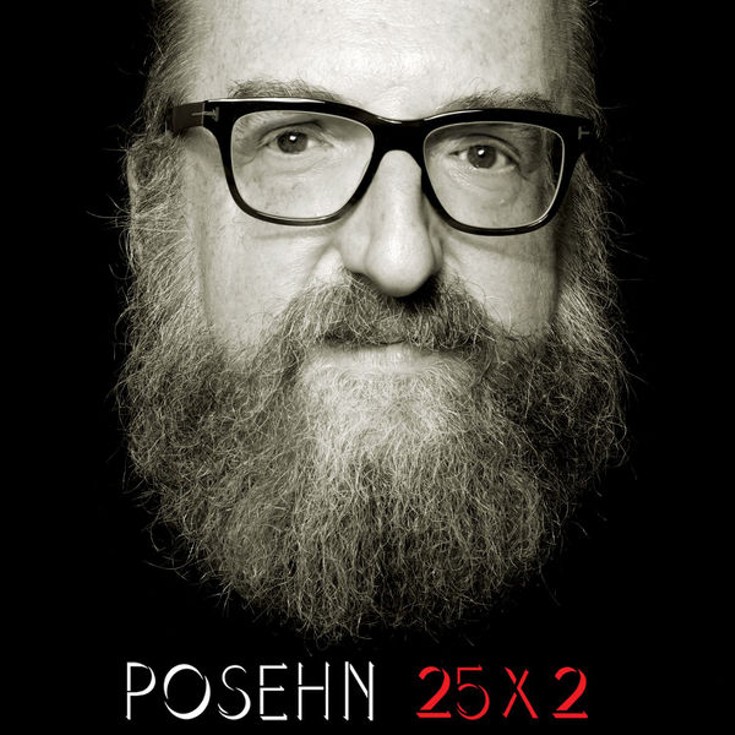 Posehn's "25x2" is a laugh riot from start to finish.
Photo courtesy of Generate Media
The touring never seems to stop for Posehn.When asked what he has planned for his Texas and specifically for his Houston date, Posehn says, "So, for these shows there's new material and some stuff from 25x2. There will be new stuff just for these shows, because taping a special for me doesn't mean I have the luxury to hop off the road. So I write while I'm on the road and the material from the special gets changed and in a lot of ways I feel it's better than it was when we did the taping."

You can stream all of Posehn's material in all of the usual places or you can purchase his merchandise from albums to comic books directly from his website. Brian Posehn will appear live in Houston, on Friday May 11 in the ballroom at Warehouse Live. The seated and all ages show doesn't list a host or feature act, but that could change. Doors at 6 p.m.; tickets $25.