What-A-Christmas! is What-A-Chance to See an Amazing Performance by Briana J. Resa 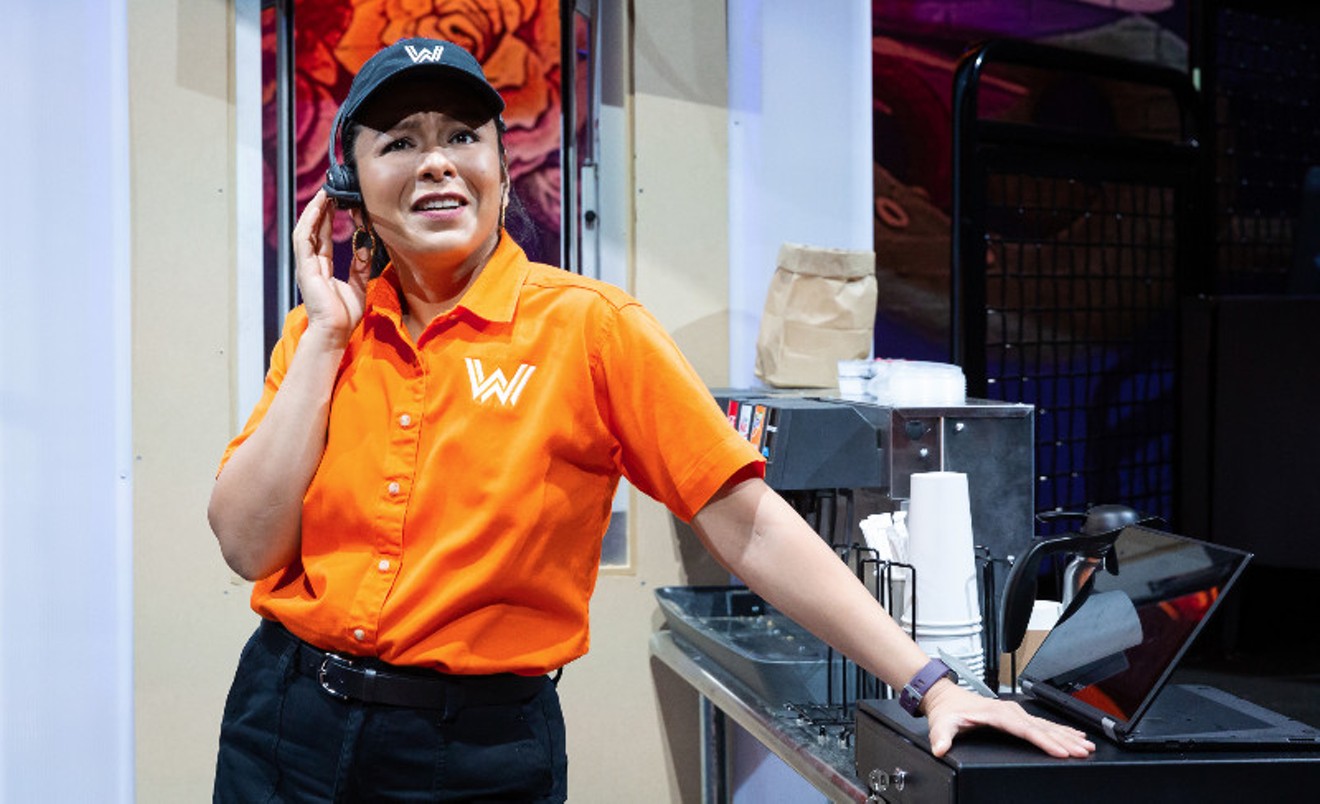 Briana J. Resa in a stunning performance at the Alley Theatre's What-A-Christmas! Photo by Lynn Lane

In old time newspaper lingo, a story that was a real attention-getter was called a "Hey Martha." The reference being to a man sitting at the kitchen table, reading his paper and calling over his wife (Martha) to see what he is reading because it is so amazing.

What-A-Christmas! in an extended run through December 30 at the Alley Theatre is a Hey-Martha, don't want-to-miss-it moment in Houston theater thanks to the incredible performance of Briana J. Resa.

Marshaling a level of physical comedy rarely seen in live theater anymore, Resa, in Isaac Gómez's new play (a retelling of Dickens' A Christmas Carol set in a fast food restaurant with a Latina main character), dances and sings, changing her voice and demeanor as she takes on one persona after another and contorting her body as each new spirit enters her.

It's not the first solo show for Resa — she won Best Solo Show in the Houston Theater Awards in 2020 as Dolores in Empanada Loca at Obsidian. She was a finalist that year for Best Actress honors for the role as well. And before that, Houston Press theater critic Jessica Goldman named Resa one of Houston's best up and coming actors in 2019.

How she got to the Neuhaus Stage at the Alley for a one-woman show is a story in itself with a collection of experiences that made her in many ways, perfect for the part of Margot, a modern-day Scrooge inhabited by a trio of ghosts.

Resa grew up in Belton, Texas on the I-35 corridor between Waco and Austin. In high school she sang in choir, played the bassoon and participated in band before switching to color guard.

She also worked the morning shift at the local McDonald's for three years. "They were the most flexible that would work with my band schedule and my choir schedule. I'd get there at 5 a.m. on a Saturday to do breakfast. In my wildest dreams I never thought that experience would come back in a professional gig like it has," she says, laughing.

She graduated from Sam Houston State University in Huntsville with a degree in music theater. She moved to Houston where she had a couple of acting internships but says herself she lacked confidence in her acting ability. "For many years I tried not to be an actor," she says now.

After about three years deciding she needed even more financial stability in her life, she went to work for five years as a hospital event coordinator in the Medical Center. "I learned so much there in terms of relationship building. An event is nothing else than a theatrical experience in itself."

But still it meant she was farther away from the stage. "It wasn't until they did a beautiful thing for me which was lay me off. I knew I needed to leave the job but I don't think I would have done it on my own. The pay was too good. The organization was going through some restructuring; it had just been purchased and bought. It's identity was changing."

She decided to rededicate herself to theater.

Briana Resa with Jim Salners in Native Gardens, a 2017 production at Main Street Theater.
Photo by RicORnel Productions
She got a part in Native Gardens at Main Street Theater where her director was Brandon Weinbrenner, now the associate producer and casting director at the Alley. It was the start of an association that would pay off for her in coming years as she continued to develop her talent.

"That was my first really true professional show after many, many years," she says. "I don't know if it was luck or not but I got laid off April 4 and I started rehearsal April 7. It was kind of meant to be."

Today, she says, she thinks about Native Gardens often and wishes she could do that role again from the perspective of her present level of confidence. Weinbrenner really wanted her to lose it at one point in the play and she wasn't able to do it. "I still wasn't what I call comfortable enough in myself to let myself embrace what I call 'messiness, lack of structure, rage.'"

As seen in What-A-Christmas, however, the years between have made "losing it" a non-problem for her, "There are moments in this show I get to embrace those moments," she says.

Once she got back into it, the theater community opened its arms to her, she says. Weinbrenner called her back for A Christmas Carol at the Alley; she was also in The Moors at Mildred's Umbrella and Alma en Venta at Stages. She also did Hunchback of Seville at Mildred's. "They've been a wonderful, supportive space for me along the journey as well.

"I feel like I was really lucky to find people in the Houston theater community who challenged me and maybe saw things in me that I didn't see yet.

"What Brandon saw in Native Gardens, he knew would be a good fit for Christmas Carol because I was brought in as the swing," she says. "I covered several, several tracks [which can be an actor playing one or multiple roles]. The things that make s swing good is knowing where you are supposed to be. High attention to detail."

“Briana is wholly committed to her craft. This was apparent even when she first auditioned for me for Native Gardens at Main Street. She mined those audition sides for everything they had. She made specific choices, asked intelligent questions, and attacked the work with full vigor. Casting her was a no brainer," says Weinbrenner. "Since then, her skill set has grown immeasurably and her level of confidence and joy in the work is vibrantly palpable. I adore Briana.”

Resa's most recent show with the Alley before What-A-Christmas! was Sense and Sensibility where she got another chance to fill the swing role.

"I covered every female role except two," she says. "What was most challenging about Sense and Sensibility is that it was constantly moving. You couldn't just walk on stage; you walked on stage with a chair. You had to put it somewhere and then move it offstage somewhere. So it wasn't just knowing what to do onstage, it was knowing how to keep the show fluid and moving and then lots and lots and lots of lines."

Back in early summer in 2019 the call went out for actors for What-A-Christmas and Resa says she knew she had to be in it. She reached out to Weinbrenner. "I asked him to send me the script and he said 'No, it's not ready.'"

And then COVID happened.

In January 2021 the Alley asked Gómez to do a short film and the director Laura Moreno (who is also both the understudy for What-A-Christmas! and the assistant director) suggested Resa for the female part. That's when Resa met Gómez. Later in 2021, Weinbrenner reached out to her to audition for What-A-Christmas! She went through three rounds of auditions including before director KJ Sanchez (Quixote Nuevo) who she'd auditioned before previously.

Resa says she's always been a mover, someone with good control of their body — besides color guard in high school (she played the bassoon for 12 years "But I couldn't march with that so that's when I got into color guard" ) she worked as a personal trainer when she was laid off. "I've always had a passion for fitness and health." That high level of activity gave her the stamina she needed to pull off a one-woman show that depends so much on movement — particularly in the opening scene where she cooks (really), wraps and delivers a burger in 90 seconds.

By Day 2 they'd already moved away from script reading at the table and were on their feet exploring how a spirit would enter them and through what part of the body. She also needed to be fast on her feet because she received 40 tweaked pages a week and a half before they opened. 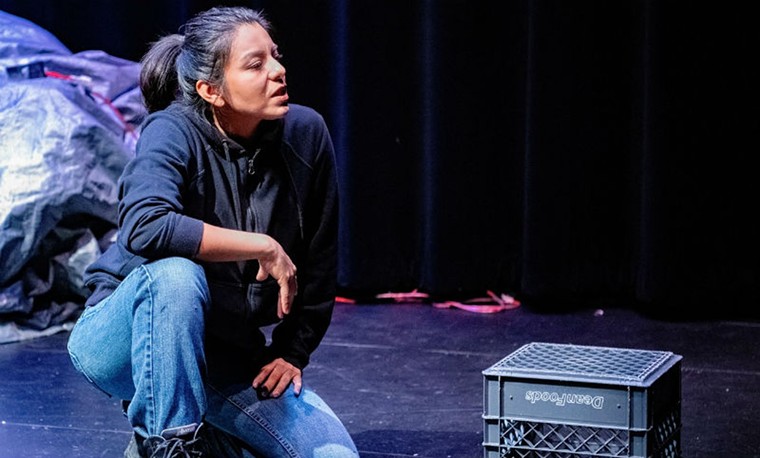 Briana Resa in Obsidian Theater's production of Empanada Loca.
Photo by Dave Snook
Voice work was also part of the preparation. Empanada Loca was the first time she'd had a role in which she constantly switched characters — which gave her an idea of what to expect. Now she was on a bigger stage with a world premiere.

"Changing the characters and how audiences respond to that. How much time do they need to understand. Is there a physicality you have to give right off the bat so someone knows who someone is?" Resa says. Robert Ramirez, head of the School of Drama at Carnegie Mellon University in Pittsburg, was brought in for two weekends to do voice work with her.

Calling on her McDonald's experience, at the top of the show, Resa as Margot cooks a burger in almost no time while a customer urges her to hurry. Although originally it wasn't supposed to be a burger. "We did have to say goodbye to a chicken sandwich. The chicken took too long to cook," she says.

Delivery of the fast food meal demands a manic pace, one Resa honed ahead of time in rehearsals where she mimed all the movements — albeit without the ingredients like meat, lettuce, bread or tomatoes. First they focused on her body path. Later, they layered in the parts of the sandwich.

Next up, Resa has been cast in Roe at Stages which examines the private lives of two Texas natives — Sarah Weddington and Norma McCovey — who were central to the classic case that legalized abortion. It's a very different play than the one she's in now, but she welcomes the opportunity.

"It's been a long journey for me in a realization of what my real passion is," she says. "And also what my real life's mission is."