Broadway at the Hobby Announces its 2022-23 Season

A season filled with Houston premieres including Richard Thomas in Harper Lee's To Kill a Mockingbird. Photo by Julieta Cervantes


Memorial Hermann Broadway at the Hobby announces its 2022-23 season today, complete with five Houston premieres — To Kill a Mockingbird, Moulin Rouge! The Musical, Six, Ain't Too Proud: The Life and Times of the Temptations and Pretty Woman The Musical — as well as Jesus Christ Superstar and the return of the ever popular Wicked as a season extra.

From there the season sweeps into romance with Pretty Woman based on the movie of the same name before getting to Jesus Christ Superstar the long running rock opera that made its Broadway debut in 1971.

Next up is Moulin Rouge!, another adaptation from a popular movie with its own special blend of romance and spectacular. The poignant To Kill a Mockingbird, based on the Harper Lee novel and the 1962 movie featuring Gregory Peck as Atticus Finch, follows with Richard Thomas (The Waltons) in the Finch role. .

The regular season ends with Ain't Too Proud which tells the hits-packed story of the Temptations' rise to fame.

Six in all its star spangled glory.
Photo by Joan Marcus ©

From Tudor Queens to Pop Princesses, the Six wives of Henry VIII take the mic to remix five hundred years of historical heartbreak into an exuberant celebration of 21st century girl power! This new original musical is the global sensation that everyone is losing their head over.

The Company of Pretty Woman: The Musical.
Photo by Matthew Murphy

Pretty Woman: The Musical, based on one of Hollywood's most beloved romantic stories of all time, springs to life with a powerhouse creative team led by two-time Tony Award(r)-winning director and choreographer Jerry Mitchell (Hairspray, Kinky Boots, Legally Blonde).

Celebrating its 50th Anniversary, a new mesmerizing production of the iconic musical phenomenon returns to the stage. Originally staged by London's Regent's Park Open Air Theatre and helmed by the acclaimed director Timothy Sheader (Crazy for You, Into the Woods) and cutting-edge choreographer Drew McOnie (King Kong, Strictly Ballroom), this production won the 2017 Olivier Award for Best Musical Revival garnering unprecedented reviews and accolades. Appealing to both theater audiences and concert music fans, this production pays tribute to the historic 1971 Billboard Album of the Year while creating a modern, theatrical world that is uniquely fresh and inspiring.

With lyrics and music by Emmy, Grammy, Oscar and Tony winners Tim Rice and Andrew Lloyd Webber, Jesus Christ Superstar is set against the backdrop of an extraordinary series of events during the final weeks in the life of Jesus Christ as seen through the eyes of Judas. Reflecting the rock roots that defined a generation, the legendary score includes 'I Don't Know How to Love Him', 'Gethsemane' and 'Superstar'. 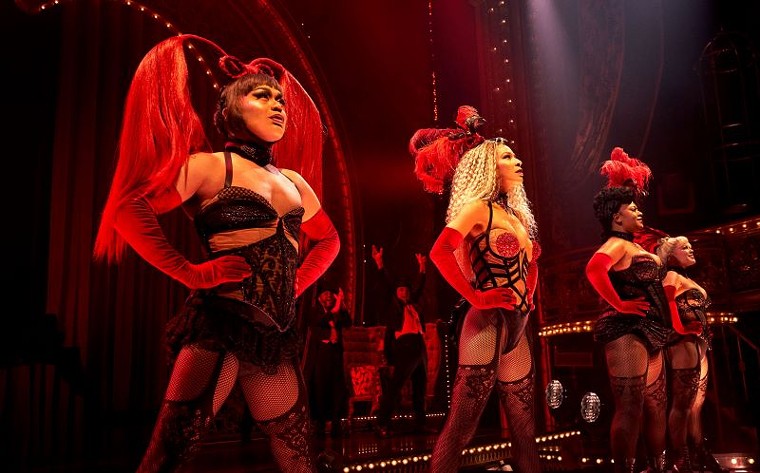 The company of Moulin Rouge! The Musical.
Photo by Matthew Murphy

Moulin Rouge! The Musical is the winner of 10 Tony Awards - including Best Musical!

Ain't Too Proud: The Life and Times of The Temptations is the electrifying new smash-hit Broadway musical that follows The Temptations' extraordinary journey from the streets of Detroit to the Rock & Roll Hall of Fame.
Nominated for 12 Tony Awards and the winner of the 2019 Tony Award for Best Choreography, it's a thrilling story of brotherhood, family, loyalty, and betrayal during a decade of civil unrest in America. Set to the beat of the group's treasured hits, including "My Girl," "Just My Imagination," "Get Ready," and "Papa Was a Rolling Stone,"

So much happened before Dorothy dropped in.

Wicked, the Broadway sensation, looks at what happened in the Land of Oz...but from a different angle. Long before Dorothy arrives, there is another young woman, born with emerald-green skin-smart, fiery, misunderstood, and possessing an extraordinary talent. When she meets a bubbly blonde who is exceptionally popular, their initial rivalry turns into the unlikeliest of friendships...until the world decides to call one "good," and the other one "wicked."

For more information, visit broadwayatthehobbycenter.org.
KEEP THE HOUSTON PRESS FREE... Since we started the Houston Press, it has been defined as the free, independent voice of Houston, and we'd like to keep it that way. With local media under siege, it's more important than ever for us to rally support behind funding our local journalism. You can help by participating in our "I Support" program, allowing us to keep offering readers access to our incisive coverage of local news, food and culture with no paywalls.
Make a one-time donation today for as little as $1.