Catching Up With the Arts in Houston: A Lost Masterwork, the Irrepressible Tamarie Cooper & More

A scene from Cane River, a nearly lost work by the late filmmaker Horace B. Jenkins Screenshot


A forgotten film of note being aired by The Museum of Fine Arts, Houston. Catastrophic Theatre's Tamarie Cooper's Quarantine Edition. A new participatory public arts project through the Contemporary Arts Museum Houston.  While visual and performing arts venues are dealing carefully with the coronavirus, there is still plenty to see and do right now.

This week the Soul of a Nation series at MFAH features Cane River, a 1982 film by the late filmmaker Horace B. Jenkins that was shot in Louisiana and tells the story of a romance between a mixed race Creole man and an African-American woman whose skin is darker than his. Other differences such as religion — he is Roman Catholic and she Baptist — add to the challenges in this 90-minute film that was only recently rediscovered.

Actor and Co-Artistic Director for Catastrophic, Cooper brings her special brand of talent and humor to an online only summer series that begins streaming July 31. Tickets are now on sale and topics to be covered by Cooper and her fellow cast members include "John Hughes movies, talking cereal boxes, insufferable cabaret performers, actual dogs, conspiracy theorists, God, profanity, iPhone Man, isolation, sparkly hats and jazz hands," according to the website.

4th Wall Theatre Co. is continuing its interview series Beyond the 4th Wall whose segments are broadcast live on Zoom on Wednesday nights and then posted to the theater company's Facebook and YouTube pages the next day. This week: NYC-based writer, director, actor, and musician K. Lorrel Manning who has directed more than 30 productions off-Broadway. Upcoming guest artists are scheduled for July 29 and August 5 and 12 at 8 p.m. with Zoom registration. 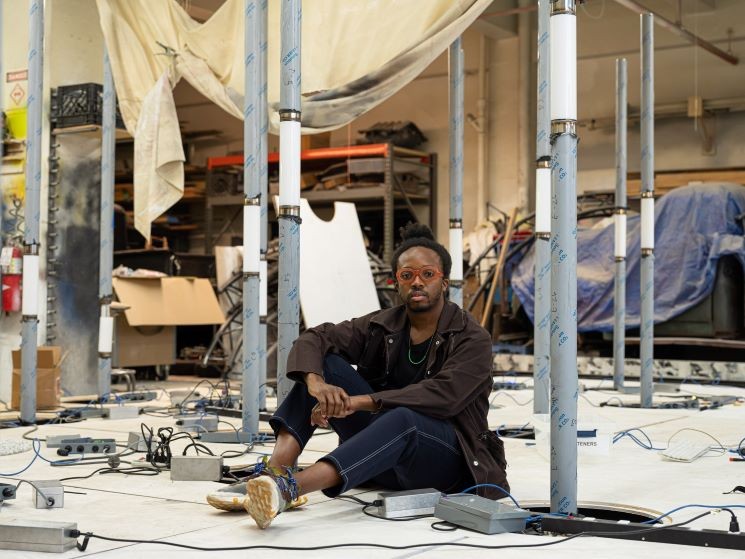 Artist Ekene Ijeoma is ready to listen.
Photo by Kris Graves
Contemporary Arts Museum Houston is launching what it calls a participatory public art project. Ekene Ijeoma: A Counting. Ijeoma has been commissioned to conduct it — to capture the "voice portraits" in major U.S. cities. Ijeoma, who was born in Texas and has been New York and Boston-based, is the founder of the Poetic Justice group at MIT Media Lab.

According to the announcement from CAMH:

Conceived as an ongoing series, the generative sound and video work will ultimately feature voices of Houstonians counting to 100 in their native languages, with a different voice speaking each number in a unique language and with the number 1 spoken in an indigenous language. The Houston edition of A Counting will also include a separately editioned time-lapse video featuring participants of the first 100 days from the project’s launch, which will document the evolution of the work as more voices and languages are submitted during this period.

The Houston edition of A Counting can be accessed by visiting camh.org/beyond or by calling 281-248-8730.

A spot of hope for local struggling artists: The National Red Bull Arts Microgrant Program has expanded to 20 cities including Houston. Apply on their website for the chance to win one of two $1,000 microgrants per city per month.

And for more program details from the Museum of Fine Arts, Houston:

Exhibitions on view: Soul of a Nation: Art in the Age of Black Power through August 30, 2020; Francis Bacon: Late Paintings through August 16, 2020; Through An African Lens: Sub-Saharan Photography from the Museum’s Collection through November 8, 2020; Sarah Charlesworth: Arc of Total Eclipse, February 26, 1979 through November 29, 2020; Spanish Colonial Paintings from the Thoma Collection through December 27, 2020; Eye on Houston: High School Documentary Photography through January 3, 2021.

“Soul of a Nation” Film Series: Cane River (Through August 30): Crafted by an entirely Black cast and crew, this recently rediscovered masterwork by Horace B. Jenkins is a racially charged love story set in rural Louisiana. On Tuesday, July 28, at 7 p.m., join Sacha Jenkins, the director’s son, for a livestream conversation with Houston music icon Bun B on the Houston Cinema Arts Society website. Film is $12 and provides access to film for three days. Streaming available online.

“Soul of a Nation” Film Series: Killer of Sheep (July 15-August 30): Focusing on the everyday life of working-class Black families, 1978’s Killer of Sheep follows Stan (Houston-born Henry Gayle Sanders), a sensitive dreamer exhausted by his job. This film is one of the first 50 films selected for the Library of Congress National Film Registry. Film is $4.99 and provides access to film for three days. Streaming available online.

“Soul of a Nation” Film Series: Ella Fitzgerald: Just One of Those Things (July 1-August 30): Trace the life and career of Ella Fitzgerald over six decades in this musical documentary. Just One of Those Things showcases her commitment to the Civil Rights battle, her musical innovations, and more. Film is $10 and provides access to film for three days. Streaming available online.

Armchair Travel “Exhibition on Screen” Summer 2020: Embark on a virtual trip to top museums and famed locations around the world. This immersive series allows viewers to tour major exhibitions, go behind the scenes, and see revealing biographies of the artists—from the comfort of their very own armchair. All films are $12 (or $10 with an MFAH discount code) and available through September 30. Full lineup and streaming links available online.