Checking In With Actors As Coronavirus Threatens Their Livelihood 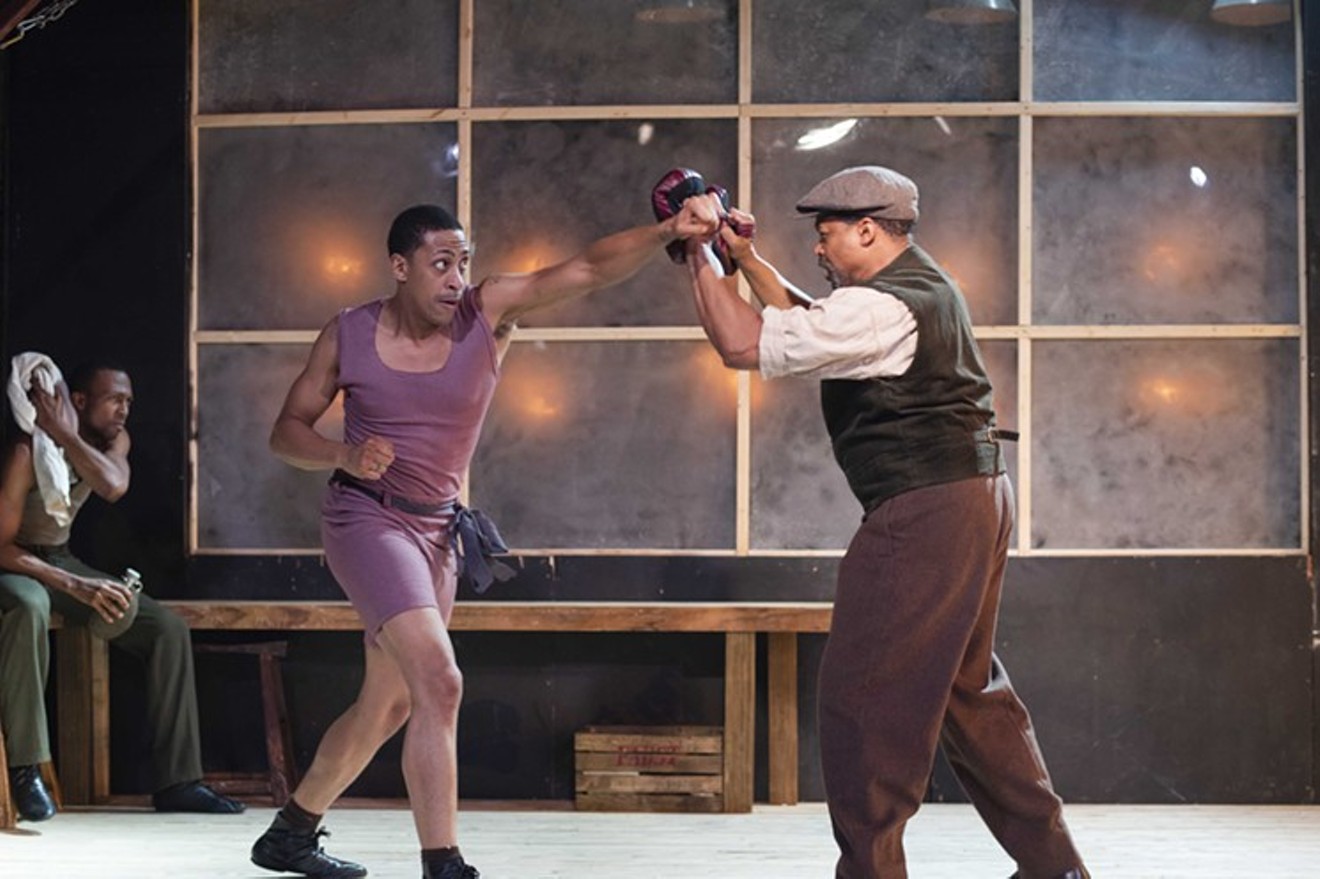 Brandon Morgan (center) in The Royale at The Rec Room in April 2019. Photo by Tasha Gorel
It was just over a week ago that Brandon Morgan got a call from the Houston Grand Opera offering him a supernumerary role in their upcoming production of Salome. He eagerly agreed. Then just days later, he received the email that so many performers in Houston got from so many arts organizations and companies around town – the production he was to perform in had been cancelled thanks to the coronavirusd.

In the message, the HGO said that everyone in the production would be compensated at approximately 50 percent of their wages. But since Morgan had only verbally agreed at that point and hadn't yet received a contract to sign, his situation was unclear. Would he get paid?

It took a couple of days and a lot of worry for Morgan, but the HGO just yesterday did get back to him, saying that yes, he would be paid in accordance with the rest of the contracted performers. A great load off his mind as he faces an uncertain financial future as a full-time actor.

Luckily for Morgan, he’s an Equity actor (the American labor union representing the world of live theatrical performance) so he can file for unemployment, but he’s still concerned about how long that will last and what will become of his health insurance. “The thing is, you’re only covered for a certain amount of time,” says Morgan explaining that for health benefits you need to have worked 11 weeks for 6 months of coverage and 19 weeks to be covered for a full year.

Morgan’s coverage year is up in June and right now he's unsure if or how his status and benefits might change due to present circumstances.

It's a scary, uncertain financial time for all actors, but none more so than those who don't qualify for the Equity safety net.

Like most part-time actors, Jarred Tettey has a side job to supplement his acting income. Or at least he did. Just two weeks ago, Tettey was hired on as a House Manager at Stages, but because the theater is shut down, so now is his job. "I was assured that there is a clause stating that if we're out for over a week that we'll get our week's pay," says Tettey. "But it's only a week pay and if we're out past a week, then I'm out of pay for longer."

Additionally, Tettey’s acting job with The Ensemble Theatre’s Touring Education Program has been put on hold as the schools he once performed in are now shuttered for the foreseeable future.

Financially, Tettey says, he isn't panicking or dipping into savings yet. He's expecting a couple hundred dollars back on his taxes. He has the money he made at Stages and the week pay he's owed. And he's hoping that a decent check for some commercial work he did last year and that's been under some negotiation, will finally come his way. He feels privileged that he's in an OK place right now.

But if things drag on, Tettey isn’t sure what he’ll do. “My other background working has been the service industry”, says Tettey. “So my fallback, if I didn't make enough money at Stages, was that I could always go and work in a café and at least makes some tips. But that doesn't seem too promising at the moment."

Even payments owed to him aren't coming in. "Companies who still owe me money closed their administrative offices and didn't process payments”, says Solis. “In some cases, I'm still waiting to be paid for assignments I filed in 2019."

With no savings or benefits, Solis decided to set up PayPal and Venmo accounts and ask people for financial assistance via his social media outlets. And it's working.

“People have been extremely generous,” says a thankful Solis. “I'm incredibly touched by the people who say "this isn't much" and then proceed to send money my way. What they don't know is that their "not much" is *everything* to me at the moment.” Solis says that he plans to write haikus and paint small watercolors to accompany them as gratitude for the donations.

While Equity Actor Patricia Duran, who was set to open a show in a few weeks, has all the same worries as her colleagues at present, she too is finding ways to feel grateful in the moment.

"There's the constant feeling that I need to be somewhere now. It's nighttime I should be in a rehearsal room or on a stage somewhere," says Duran. "But at the same time, it's great because I think about the show every day, I think about the characters. And I'm curious to see what's going to happen when we do it again. I'm hoping it will enrich our process to have the time away from it and then come back. Hopefully, we'll produce something deeper and more meaningful."
KEEP THE HOUSTON PRESS FREE... Since we started the Houston Press, it has been defined as the free, independent voice of Houston, and we'd like to keep it that way. With local media under siege, it's more important than ever for us to rally support behind funding our local journalism. You can help by participating in our "I Support" program, allowing us to keep offering readers access to our incisive coverage of local news, food and culture with no paywalls.
Make a one-time donation today for as little as $1.