Collect It For The Culture Re-energizes Downtown Robert Hodge and India Lovejoy join forces to bring Collect It For The Culture to downtown. Photo by Emile Browne
The corner of Main and Dallas is empty late on a Sunday evening. Its eerily silent aside from the occasional person whirring by on a rented scooter and piercing the soundless night. The corner is occupied by a building that use to house the two story Forever 21 but, since the store's closure, has sat unused for the last couple of years. The space, usually well-lit but empty, is a little dimmer than usual but the silhouettes of a few people can be seen moving around through the windows that wrap around the structure.

“This use to be a clothing store,” exclaims one of the men while he directs others moving boxes around the space before he sighs and explains the lack of light. “I’m keeping the lights low so people can’t see everything we have going on in here…and so we can keep the light bill low!”

The man who’s laugh is now echoing through the cavernous hall is Robert L Hodge and he and his creative partner, India Ashley Lovejoy, have tasked themselves with turning the commercial space into a gallery called Collect It For The Culture. A few days later at the opening the fully lit the space seems even larger but not as empty. The hall is full of art at every turn. Patrons stop to admire all the various pieces as Lovejoy and Hodge navigate through crowds, mixing and guiding people towards various paintings and sculptures.

Hodge, a multi-disciplinary artist who has gained success here in Houston and abroad, teamed up with Lovejoy, curator and founder of the Black Buddha Creative Agency, to expand a concept she had been working on for the past few years.

“I started the agency in 2017 as a concept to activate alternative spaces to sell art but the entire philosophy behind it was to activate spaces that were not galleries in an effort to create open dialog about the art,” Lovejoy recalls as she sits in one of the many nooks found around the gallery. “I did a series of shows at the union for about 7 months which is kind of how the first Collect it for the Culture came about. I reached out to Robert Hodge about and we were talking about intersecting multiple themes like Houston culture and music culture. He loved the idea and just took it and ran with it.” 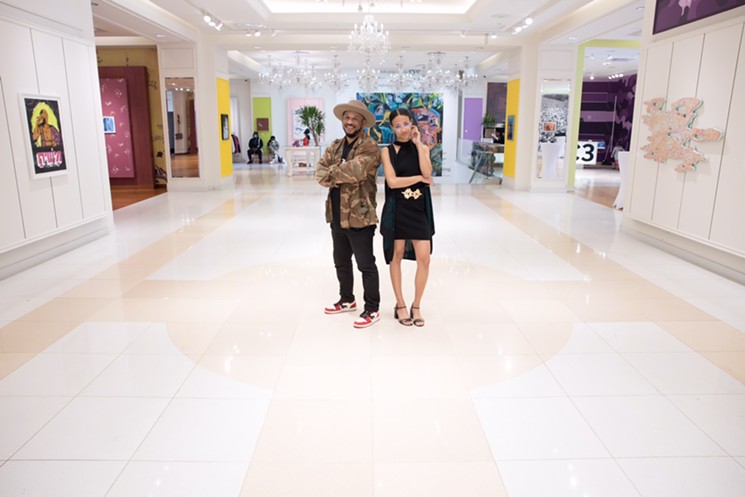 The duo have used their combined talents to convert an unused Forever 21 into an art gallery.
Photo by Emile Browne
Lovejoy, who got her start working at a well known Houston community centered art collective credits her time there with helping to develop her love for artists.

“When I first got to Houston, I was working at Project Row Houses selling art. I didn’t know a lot about everything, but I just knew I loved art. In order for me to really sell I had to learn about the people behind the work, so I kept interviewing artist after artist to learn more. I found that I really liked working with and uplifting artists.  The whole process taught me how to buy and sell from an artist’s perspective.”

Bringing together and uplifting the artistic community is the main focus of the gallery, a point that Hodge hammers home often as he describes the vision of Collect It For The Culture.

“This gallery is temporary, but these artists are here working in Texas are part of the longterm community and need to be showcased. We need to value and cultivate them so the art world here in Houston can grow. Why aren’t we utilizing these empty buildings that are beautiful and letting artist activate them?” Hodge asks, arms outstretched as he motions around the space.

“We wanted to give a platform for artists to share their work and, in a lot of ways, the presentation lends itself to a different respect level. I love coffee shops, but this really provides a museum quality level for our artist’s work. We want to take these brand-new artists and combine them with mid-career level and living legends in a show that the public might not be used to seeing.”

Lovejoy feels just as strongly about making art accessible to the masses as well as helping educate the art community.

“The whole concept is that everyone should be able to buy art. We should be able to mix people that know about art with people just learning about art in a noncompetitive environment. Just that mixing of artists helps a lot of our contributors.  The younger artists are becoming more informed by just seeing how the established artists operate.  Looking at the work and the prices is an educational experience for everyone in itself.”

“Plus, who knows,” Hodge interjects. “Some developer might see this building in a different light and want to buy it. It’s a win-win for everybody.”

Given the size of the space, and the scale of the project, Hodge and Lovejoy are often hit with the question of how it all even came together.

“People ask me how we got this space,” laughs an exhausted Lovejoy as she finally gets to take a seat. “It took about 200 emails and 2,000 man hours. It was an unquantifiable amount of work.  And it still wouldn’t have gotten done without the help from the artists. So many artists in the show stepped up and helped us without even asking. Plus, of course, there’s Hodge. He basically slept up here the last week before we opened. Robert has all these big dreams and visions and I create the structure. He’s the flesh and I’m the bones. He works with the art and I work with the artists”

So far, the duo’s work is paying off with the launch generating a buzz which has Houstonians heading to the Green Street Building to see the space for themselves. It’s a sentiment that one of the artists, Rabea Ballin, echoes as she steps into the space for the first time to look at her work and the works of others.

“I am absolutely blown away,” she gasps as enters the building and finally sees the presentation. “It just goes to the importance of going into a space and not just seeing it online. Just coming up the stairs and looking at the work it is so much more three dimensional than what I would have expected. It’s a lot. But it’s a good a lot.” The space is open until the end of February so see it before it ends.
Photo by Emile Browne
Ballin’s reaction is shared by many visitors, especially those that had been there when it was a Forever 21. Hodge believes the building was underused but is hoping that now the public can really appreciate it as a gallery.

“I’m going to find out who the architect was for this space because it is just beautifully designed. It has the perfect design. It’s like they were trying to elevate the clothing through the architecture but then it got too crowded. Once you remove all the clothes you can really appreciate what is here.  The question shouldn't be why did we turn a Forever 21 into an art gallery.  The real question should be why was this beautiful space ever a Forever 21.”

collectitfortheculture.com continues through February 28.
KEEP THE HOUSTON PRESS FREE... Since we started the Houston Press, it has been defined as the free, independent voice of Houston, and we'd like to keep it that way. With local media under siege, it's more important than ever for us to rally support behind funding our local journalism. You can help by participating in our "I Support" program, allowing us to keep offering readers access to our incisive coverage of local news, food and culture with no paywalls.
Make a one-time donation today for as little as $1.