Pete Gershon's hefty tome, Collision: The Contemporary Art Scene in Houston, 1972-1985, identifies pioneers who elevated Houston artists and shaped our art community. Shown: (L) Jim Harithas circa 1978 and (R) James Surls and John Alexander in 1975. (L) Photo by Suzanne Paul, courtesy Deborah Colton Gallery and (R) Photo by Janice Rubin, courtesy of John Alexander
Now we're not saying that James Surls and Bob Graham burned down the University of Houston's Art and Architecture building in 1978 when sparks from their welding torch went awry, though those who knew the chainsaw-wielding sculptor and his protégé think otherwise.

As reported by The Cougar, a lightning strike shorted the building's electrical system, but the sudden displacement of architects, sculptors and ceramicists from the Quonset hut "ARA" building set into motion a series of events that changed Houston's art landscape forever.

George Bunker, the chair of UH's art department, was almost embarrassed when he presented faculty members Surls, John Alexander, Richard Stout and Gael Stack with an available space five miles from campus, a former cable factory at Lawndale Avenue and Dismukes. It was hot, dirty and dangerous but Surls only saw possibilities in the cavernous space, and the Lawndale "incubator" went on to become the Lawndale Annex, a precursor to today's Lawndale Art Center on Main.

Pete Gershon, in researching his new book, Collision: The Contemporary Art Scene in Houston, 1972-1985, was given the keys to Lawndale's archives as he followed four main story arcs in this very fertile, and volatile, period of Houston's art history. By day Gershon is the Core Residency Program Coordinator for The Core Program at The Glassell School of Art, part of the Museum of Fine Arts, Houston campus. By night — instead of counting sheep — we're convinced he keeps adding factoids, anecdotes and names to his never-ending timeline of who's who and what's what. 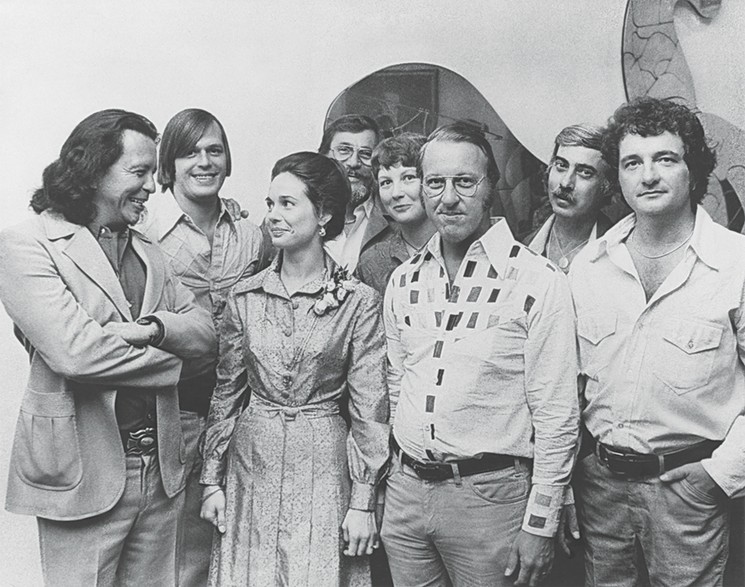 Read more about these art pioneers in Collision. Shown: Fritz Scholder, Lucas Johnson, Betty Moody, Charles Pebworth, Victoria Andrews, Arthur Turner, Stanley Lea and Lamar Briggs at the inaugural opening of Moody Gallery in 1975.
Photo courtesy of Moody Gallery
We'll admit to some schadenfreude while reading the book, as the 13-year period that Gershon covers includes enough juicy tidbits that, if they had happened today, would have surely broken the internet.

Gershon opens the book with the unveiling of the brand new Contemporary Arts Museum in 1972. Donors, patrons and the media were aghast to view (and smell) live animals, plants under grow lights and a worm farm. Before the night was over a cat and some rats had escaped (though later recaptured) and the Houston Post's Lynn Ashby mistook Robert Grosvenor's Airey Point, a 50-foot-long pipe running across the room, for a sloppy plumbing mistake.

"It’s interesting when you think about that exhibition. It could be very fresh if it were presented today. A lot of these concerns about animals, the environment, minimalism were certainly of their time," says Gershon. "I would also say the artists here in Houston really understood it and liked it; it was the patrons and laypeople who did not understand it. They gave so much money."

CAM's inaugural director, Sebastian "Lefty" Adler, didn't last long in the position, and soon search committee member Marilyn Lubetkin tapped James Harithas for the job; he had been the director of Syracuse's Everson Museum and was responsible for installing Yoko Ono's first solo exhibition in the United States, "This Is Not Here."

Though new to our region, Harithas could see that CAM had overlooked adding local artists to its exhibition schedule and began to right the wrong by asking his pot-smoking staff to hang their own pieces in a show titled Art of the Lower Crust while he began scouring studios and giving innumerable local artists a foothold in the art world. In the end renegade Harithas only lasted four years in the position, though he's continued to make his mark and currently serves as director of the Station Museum of Contemporary Art.

"Jim Harithas was key to this project. I interviewed him five times. He was really generous and without his participation I don’t think I would have done this book," says Gershon, who eventually conducted more than 60 interviews with artists and insiders. "I went to Colorado to interview Surls and his wife, sculptor Charmaine Locke. That was really amazing to get to spend some time with James at their gorgeous spread [in Roaring Fork Valley]. That was certainly memorable; I valued every opportunity."

Barbara Rose photographed in February 1985 for Houston Home & Garden Magazine by Fran Brennan. In background: Paul Manes, Untitled, 1984, oil on canvas, 74 by 80 inches.
Photo by Fran Brennan, courtesy of Pete Gershon
Just as financial institutions were forced to implement tighter restrictions after the bank bailouts of 2008, the business of museum management was sort of in its "wild west" period during the '70s and early '80s. Gershon's book recounts how our city's dirty laundry made its way to the pages of The New York Times.

It seems that art world superstar Barbara Rose, ex wife of Frank Stella, had been working with MFAH director Bill Agee in the late '70s to raise the profiles of overlooked early twentieth century American abstract artists through a series of exhibitions and catalogs. She curated an exhibition titled American Painting: The Eighties (even though the decade had barely begun), a traveling exhibit that opened in New York and came to CAM in Houston, and in March of 1981 was appointed MFAH's Curator of Exhibitions and Collections.

But that's when it all hit the fan. The Houston Post's Mimi Crossley broke the story that, by raising the profile and importance of artist Patrick Henry Bruce through inclusion in the exhibit, she personally profited when her second husband, songwriter Jerry Leiber, sold five of his paintings to MFAH for $80,000. It all became even murkier when it was revealed that Rose was a bestie of gallerist Janie C. Lee, who was married to David Warren, an assistant director under Agee.

Barely had the dust settled when it became known that Agee — who had his eye on purchasing Picasso's 1910 painting The Rower and Hans Hoffman's 1963 masterpiece Fiat Lux — had quietly deaccessioned 17 works from the MFAH's permanent collection. Very important donors to the museum were horrified to discover that their gifts had been sold off, yet they hadn't been given the option to repurchase the works.

The museum's board of trustees received a scathing letter, calling into question conflicts of interest, hiring policies and a perceived lack of interest in the community. Agee thanked them for their concerns, but said he wouldn't respond to an unsigned missive.

"In response, the caucus resubmitted their letter, adding the signatures of all twelve members of its executive committee, plus seventy-four prominent members of the local arts community, men and women," recounts Pete Gershon in Collision.


"It really was a different time; museums have really professionalized since then. The whole deaccessioning thing, that colored Bill Agee’s term at the museum. It’s worth remembering that, with respect to Barbara Rose, I tried to be really fair, and really give both sides a chance to address the issue," says Gershon. "The public letter that the artists in Houston organized. I didn’t want to sidestep it, but I really do understand that there are multiple ways of seeing these events."

Gershon has been fair in his book, and when Peter C. Marzio assumed the reins as new director of MFAH in 1982 he discovered the value in Rose's deep connections; she went on to organize several important exhibitions, including the largest-ever Joan Miro retrospective in America in 1982.

As for Gershon's sheep-counting fascination with the facts? Collision ends with an appendix of Houston's art history (1972-85), framed around the political and civic events of the period. But even though the book has been published he keeps adding to that timeline; the updated version can be viewed at houstonarthistory.com.

Gershon's only regret is that, as hefty and image-filled as this book is with 480 pages and 393 images, there still were limitations. "So much going on, it was impossible to fit absolutely everybody and everything. Some of my favorite artists of the era don’t even appear in the book. I'm not trying to leave anybody out," says Gershon. "So now I’m kind of looking at the book as a component of a larger project that includes more original concept for the website, exhibitions. I hope people will follow the project."

Collision: The Contemporary Art Scene in Houston, 1972-1985, by Pete Gershon
Published by Texas A&M University Press
$65
KEEP THE HOUSTON PRESS FREE... Since we started the Houston Press, it has been defined as the free, independent voice of Houston, and we'd like to keep it that way. With local media under siege, it's more important than ever for us to rally support behind funding our local journalism. You can help by participating in our "I Support" program, allowing us to keep offering readers access to our incisive coverage of local news, food and culture with no paywalls.
Make a one-time donation today for as little as $1.