Choreographer Tehillah Hartman challenges dancers in a game show-inspired piece titled What is the Highest Price? Photo by Tehillah Hartman
It's not often that hip-hop, ballet, game shows and tap can share the same stage but, when it happens, you just know that things are going to get interesting. This year's choreographer's showcase serves up a veritable smorgasbord of delights, with literally something for everyone on the program in Houston Choreographers X6.

The midway jewel in the crown for Dance Month at the Kaplan Theatre, presented by the Evelyn Rubenstein Jewish Community Center of Houston, brings together works by half a dozen choreographers. Maxine Silberstein, artistic director for Dance Month, says the committee looks for veteran choreographers who have produced works in the past, but who may not always get a chance to present regularly to Houston audiences.

Tehillah Hartman (Open Dance Project) riffs on game shows with What is the Highest Price?, set to music by composer Jonathan Kinsey. "That piece is really going to explore themes of identity and self worth," says Silberstein. "It’s using a game theme, like contestants competing to win, like in a game show. There’s spoken text and music and the music is inspired from popular TV game shows that contain elements of improvisation, quizzes, puzzles, luck of the draw and survival."

Choreographer Annie Arnoult has been working on an evening-length piece about renegade dance, theater and film star Valeska Gert; we'll see a segment during Houston Choreographers X6.
Photo by Lynn Lane
Open Dance's founding artistic director Annie Arnoult is giving us a sampling of an evening-length work that she's presenting at Rice's Moody Center for the Arts in May. Dada Gert is set in Weimar-era Berlin and was inspired by the late German Jewish dancer and cabaret artist Valeska Gert, who laid the groundwork for what was to become the punk movement. Silberstein tells us the piece addresses the censorship and intimidation of Jewish artists by the rising Nazi party; the segment we'll see at the J is titled Dada Café.

Tapmaster Tony Merriwether's piece in this year's show is titled Improvography. "This piece, the concept word was coined by the late, great Gregory Hines to describe a true hoofer’s approach to tap dance," says Silberstein, adding that last year's performance was a phenomenal hit. He'll be joined on stage by a pair of tappers, one of whom hails from Austin. 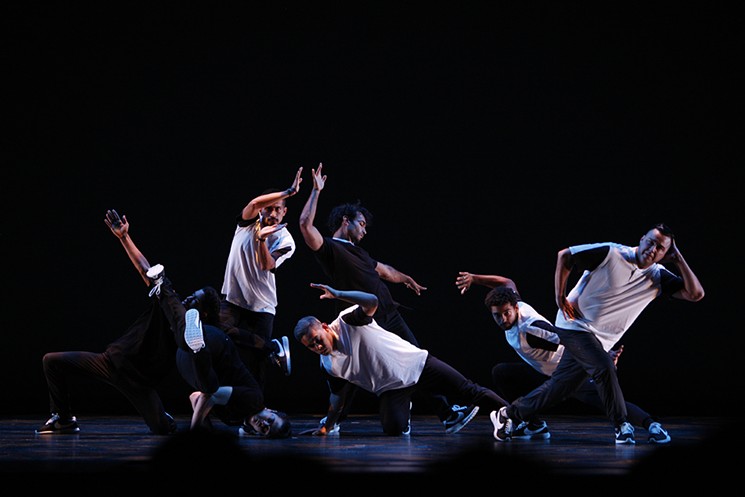 Choreographers Bryan Paule and Joel Rivera are commited to exploring the nature of hip-hop through choreography, theatricality, story and education.
Photo by James Wiseman
Immigration issues are top of mind these days, and hip-hop ensemble Bryan Paule and Joel Rivera (HIStory Dance Co.) will explore the subject in a work titled American Me. "Their piece is going to be centered around immigrant parents and sons [who will] share their stories of life and social issues that they deal with," says Silberstein, adding that their choreography is infused with theatricality. "Even though it’s hip-hop they’ll have a message or some content that really will be relevant to today’s times."

Jennifer Wood, Suchu Dance founder and artistic director, will explore the spaces between dance, athleticism, physical training, the creative process and the act of performance — both onstage and backstage — in a piece titled What is Dance? Silberstein describes it as a comedic post-modern piece for six dancers, with a recorded score titled The Perfect Split.