The Guild Queen Felicia Day Sets Her Sights on Comicpalooza Felicia Day, shown in Season 1 of The Guild, will appear in the new season of Netflix's Mystery Science Theater 3000. Screenshot/YouTube

If you’re excited to see Felicia Day at Comicpalooza, you’re probably already aware of her laundry list of acting and production credits: her arc as Charlie Bradbury on Supernatural, various voice-acting roles in video games and animated shows like Adventure Time, her web series The Guild, the online short Doctor Horrible’s Sing Along Blog and her memoir, You’re Never Weird on the Internet (Almost), to name but a few.

This coming Saturday, Day will take part in an open-ended Q and A session with fans, likely to address her role in MST3K's new season as Kinga Forester. Kinga is the new generation of “Mad,” the daughter of original mad scientist character Dr. Clayton Forester. The new 14-episode season premiered in April on Netflix after a hugely successful Kickstarter campaign. Day's Comicpalooza panel will start at 3 p.m.

According to series creator Joel Hodgson, Day was approached to play Forester by Hodgson after the two met at a convention in 2015. “Felicia's secret power might be that she is fine being an outsider,” Hodgson wrote on the Bring Back MST3K Kickstarter page. “And I also just think she can pull off being likable, intimidating and ‘crazy’ all at the same time: a total wild card! As the next Mad, she’s gonna need all that and more.” 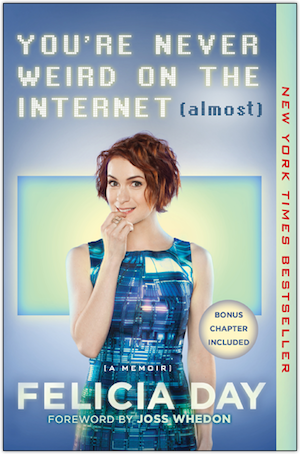 Day also recently finished filming a movie called Chew. Based on a comic series of the same name, the animated feature follows Tony Chu, a detective with the peculiar gift of “cibopathy” — the ability to receive psychic impressions from the food he eats. Day voices Amelia Mince, a food writer so eloquent and descriptive that her readers can actually taste the food she’s writing about, a talent that leads to trouble after she gets bored and starts writing about disgusting food.

In a brief interview earlier this week, Day told the Houston Press that what she likes about conventions is that “it’s not just about the celebrity factor. It’s about families coming to enjoy the panels, the vendors selling cool T-shirts you can’t find anywhere else. Maybe you can find a present for your mom, or yourself.”

Other than the odd drive through, Day says she’s never been to Houston before, and that she’s excited to see the city. Her daughter Calliope Maeve, just born this past January, will be traveling with her. Day says she probably won’t have time for much outside of Comicpalooza on this trip aside from visiting family, and maybe hunting down some cool coffee shops. “Its always the things that are unique about a town that you take with you,” she says, “the little places, not the big chain stores.”

When asked if there was anyone she was excited to meet at Comicpalooza, she said what any of us probably would: Chuck Norris. “I don’t know if I’ll meet him in the green room,” she says, “but I’ll certainly try!”

In addition to the Q and A panel, Day will be available for photos at Comicpalooza from 12-12:30 p.m. Saturday and 10:30-11 a.m. Sunday. See comicpalooza.com for full details.