The Era Of "Swayzsure" (Patrick Swayze Erasure) Is In Full Swing 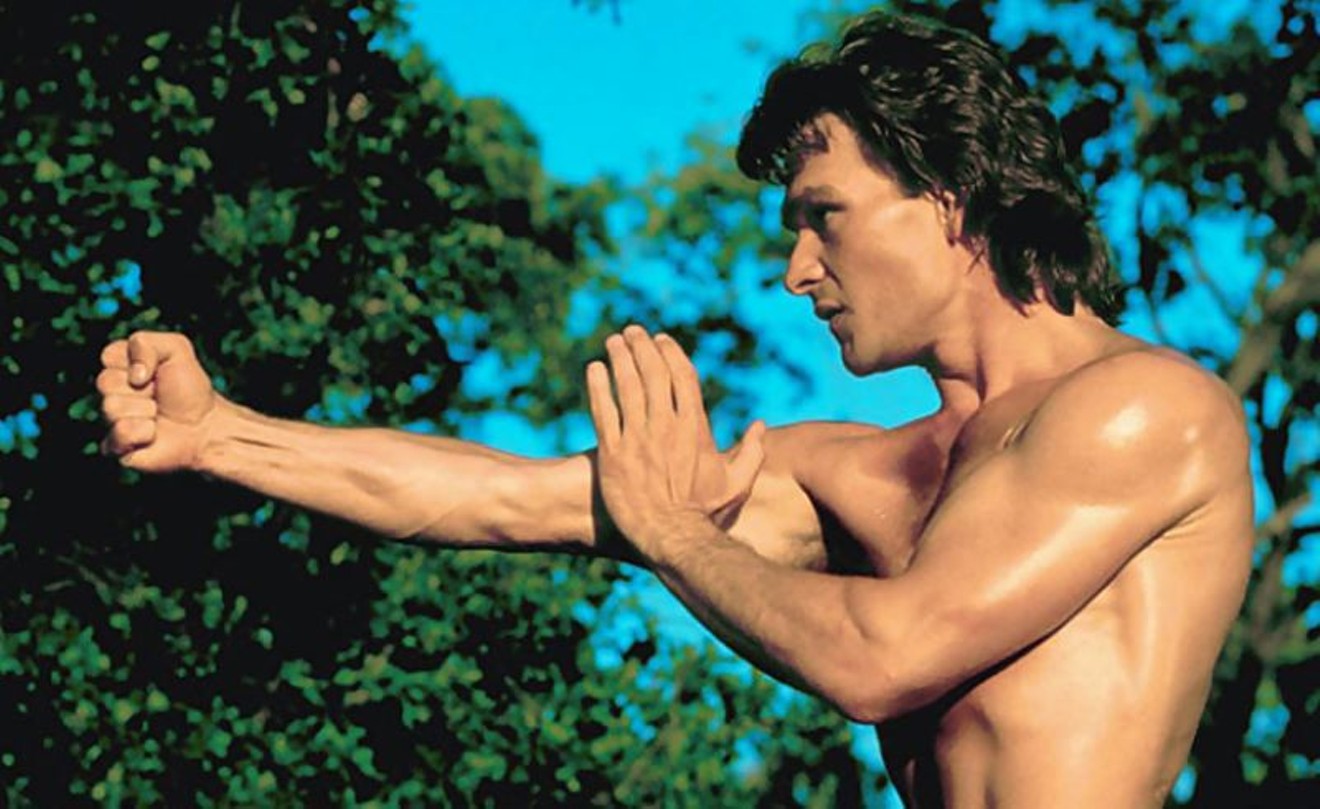 Jake who? United Artists
Next month marks the 13th year since Houston's own Patrick Swayze shuffled off his mortal coil. The former Sexiest Man Alive was just 57 years old (last Thursday would've been his 70th birthday), and left behind a cinematic legacy no one who remembers the late 1900s (as the kids are calling it) will soon forget.

And yet Hollywood sure seems to want that to happen.

Swayze made his cinematic debut in 1979's Skatetown, U.S.A. In spite of that, he went on almost immediately afterward to an increasingly successful career. In addition to the aforementioned "Sexiest Man" label, he starred in some of the most iconic (and a couple of the top grossing) movies of the '80s and '90s. Perhaps because of that, remake-happy studios are unfairly singling out his films.

The first salvo was fired at a movie which many remember fondly, though mostly through the lens of Cold War upbringing: Red Dawn. In the 1984 original, Swayze's Jed Eckert leads a group of Colorado teens into the mountains to wage guerrilla war against invading Russian and Cuban troops (who were somehow able to penetrate thousands of miles of U.S. airspace). The remake starred Chris Hemsworth defending (checks review) Spokane? From (checks again) North Korea? It was directed by Dan Bradley, who has 133 stunt credits on IMDB and one directing one. For this.

Okay, so what? Aside from a specific subset of Gen-X dorks (*cough*), Red Dawn wasn't necessarily some masterpiece to be defiled.

Exhibit 2: in 2015, the remake of Point Break limps into theaters. In the 21st century, it's apparently not enough that the gang of bank robbers are also merely surfers (spoiler warning), now these same reprobates perform all manner of international *extreme* sports while doing their crimes. The main difference between this and the original (aside from the inexplicable decision to cast black hole of charisma Édgar Ramirez as Bodhi)? Nobody involved seems to be having a good time.

Did anyone ask Keanu if the Point Break remake was a good idea?
20th Century Fox
But it starts to really look like they're really gunning for the Waltrip High alum when they remade Dirty Dancing (remade for TV, but still) in 2017. Up until Ghost a few years down the road (more on that later), DD was Swayze's biggest box office hit. For the remake, they brought in director Wayne Blair, an Australian whose only previous (and subsequent) efforts all took place in the Land Down Under. Seems fair.

The key element of all these remakes? Their lousy Rotten Tomatoes scores. 2012's Red Dawn scored a 14 percent "Fresh" rating, Point Break an 11 percent, while TV's Dirty Dancing sits at an anemic 19 percent.

Finally, the architects of Swayze erasure (or "Swayzsure," as I'm calling it) are calling in the big guns. Bourne Identity and Edge of Tomorrow director Doug Liman has been tagged for the recently announced Road House do-over, with Jake Gyllenhaal stepping into Swayze's shoes as Dalton, as well as UFC hothead Conor McGregor in an unnamed role (if it's Wade Garrett, we riot). In further insult, this is set to go straight to Amazon Prime.

At this point, I'm not sure where else they can go to pick the bones clean. Ghost? Interestingly enough, Paramount and Shochiku already did this. It was called Ghost: In Your Arms Again and only released in Japan in 2010. And somehow, this doesn't feel quite as egregious, since the original grossed some $500 million. Next of Kin? We're kind of already living in the era of redneck cops. Steel Dawn? Is it a remake if nobody remembers the original?

Kidding, of course. I remember the original.

Hollywood remakes are nothing new, of course. These recent efforts to plaster over Patrick Swayze's career feel worse, however, coming as they are after his untimely passing. Pain, as Dalton famously said, don't hurt, but I have to believe watching his most beloved films getting perfunctory, hack job treatments sure might have.
KEEP THE HOUSTON PRESS FREE... Since we started the Houston Press, it has been defined as the free, independent voice of Houston, and we'd like to keep it that way. With local media under siege, it's more important than ever for us to rally support behind funding our local journalism. You can help by participating in our "I Support" program, allowing us to keep offering readers access to our incisive coverage of local news, food and culture with no paywalls.
Make a one-time donation today for as little as $1.