Maybe All Theater Audiences Shouldn't Have to Shut the F Up? 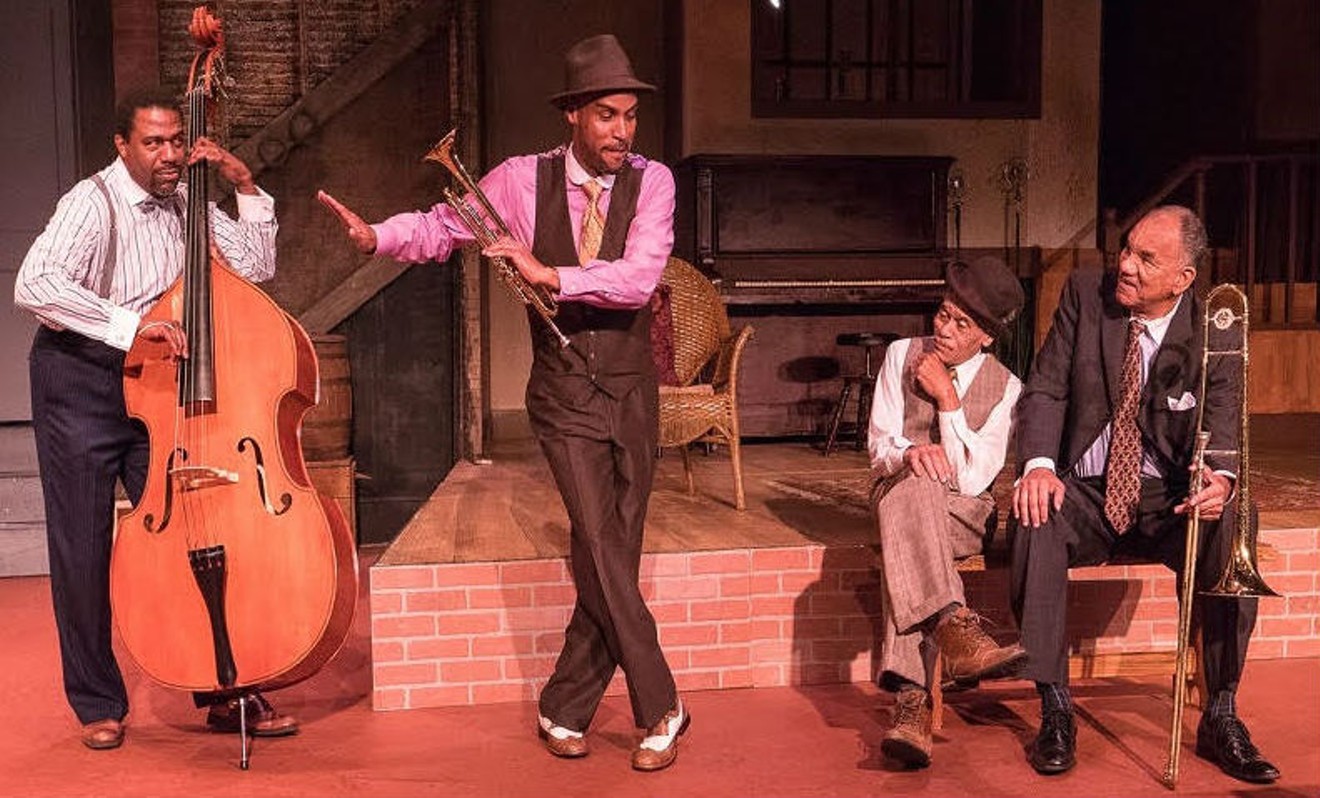 Jason Carmichael,TiMOThY ERiC, Wayne DeHart and Wilbert Williams in Ma Rainey's Black Borrom. Photo courtesy of The Ensemble Theatre
“OMG, have you read the theater etiquette article yet?” “You totally need to read this awesome article.” “YAAAASSSS to everything she says in this piece.”

These were the messages I was bombarded with via email and social media two weeks ago when TimeOutNew York published writer/performer Amanda Duarte’s article, Sit down, shut up and clap: A guide to theater etiquette.

And folks were right to squeal about how good it is. In the article, Duarte, with her potty-mouthed sass and amusingly straight to the point writing style, lays out her unequivocal ground rules for theater audience behavior. Rules that I can absolutely get behind. “Sit the fuck down”, she says. Yup, I’m on board with that. Find your seat and get to it. “Sit the Fuck Still”. If that means don’t kick my chair or go to the restroom three times during a show, count me in. “Turn. Off. Your. Cellular. Device.” Hell yes. “Wear clothing….Be Healthy”. Check and check.

However, one of Duarte’s rules screetched my full agreement to an abrupt halt.

“Shut the fuck up,” she says. And by this, she doesn’t just mean no sidebar conversation about your date last night or whispers back and forth about the show. She means no noise at all. “Do not talk back to the actors. Do not sing along with the singers. Do not emit satisfied hums to let everyone around you know that you really got that James Joyce reference. We all got it. We’re just not narcissistic goats about it.”

Here’s the thing, anyone in Houston who has spent time at The Ensemble Theatre, one of our nation’s largest African American theaters, knows that audience silence is not golden there. In fact, talking back to the actors, singing with the singers and emitting satisfied hums is the norm. I’d even say it’s a big part of the experience (and joy) of seeing a show at Ensemble.

So what’s going on here? Is Duarte saying that the way Ensemble patrons behave is wrong? That they need to alter the way the behave? And why is the experience different at this theater?

“I don’t think it’s just the Ensemble Theater, I think it has to do with culturally specific theater,” says Eileen J. Morris, Ensemble Theatre Artistic Director. “In the African American tradition, we come from a call and respond community. That’s why church is such an important part of what we do in our community. The preacher preaches and stirs emotions that we, the people of African descent, go Amen, and want to respond.”

And theater, Morris says is not different than that.

“When people come to Ensemble and see that people are doing a “mmm-huh” underneath their breath or “Girl, I don’t know why you’re doing that”, or talking back or saying “Stop”, I can only say that it’s because human beings have been touched in such a way by what is happening on stage that they can’t help but emote and react. And from our culture, we react by not holding it in, we let it go.”

Kelundra Smith, an Atlanta-based theater critic sees performance spaces as places where people come to worship the arts in a way, so it’s only natural that they behave as they do in their religious spaces. “In communities of color, African American, Latino and native communities particular, call and response is part of the story telling tradition,” says Smith. “So the shut the fuck up is never going to be the case for persons of color because their religions don’t require that.”

It may be mainly persons of color today who show their theatrical engagement via vocal expression, but let’s not forget that once upon a time, white folks, as well as other ethnic groups, did it too. Ancient Greek audiences were raucously engaged with the performances and would even hiss and throw stones at less than stellar performers. Shakespeare’s audiences behaved more like they were attending a concert than a sacredly silent event, eating, drinking and talking throughout the performance. So, OK, we can be thankful that the hurling objects at actors is no longer acceptable, but in effect, Amanda is upset by a natural human reaction that it seems we’ve all been guilty of having in the theater at one time or another.

Actor/Director TiMOThY ERiC has experienced his fair share of audience talking during his performances and while he admits it can be distracting for an actor at times, he’s disinterested in policing it. “Personally it can be annoying for a moment hearing someone mouthing off during a performance but by winning the argument you lose something greater,” says Eric. “Amanda may be upset because she's not accustomed to it, but by saying shut up, you may have just turned somebody off theater and I don’t think losing a patron or denying their experience is worth saying you gotta be silent.”

For Smith, it’s all about coming together and getting along. Theater she believes invites people of all different traditions to commune and experience art. “And so what has to happen is a little give and take. It is unfair to say no, you can’t experience it that way,” says Smith. “Now, of course, you don’t want people excessively talking and creating their own show during a show. But to respond to what they’re seeing by giving a sound or a word of affirmation or clapping their hands or singing along or stomping their feet … there has to be space made for that. Especially if a theater is to become what it says it wants to become, which is to be a diverse place where all people are welcome.”

Outside of Ensemble or other culturally specific theaters, Morris admits she reins in her reactions somewhat, but doesn’t believe that she has to negate who she is simply because she’s in a predominantly white theater. ‘I am who I am, and if I uh-huh under my breath, I’m not trying to ruin your experience,” says Morris. “My life experience and my culture guide me in my expression of my feelings and sometimes it may not be in the traditional format we think theater should be. This is who I am and what I’m feeling and I will always be respectful to those around me but I also need to be true to the emotional journey I’m on right now.”

But what about the emotional journeys of others in the audience? What if they are disturbed by the noise? Duarte herself claims cheekily that, “if you do not adhere to my fascistic standards for audience behavior, we are at war.”

Smith isn’t having it. “I think this is one of those cases where having privilege makes compromise feel like oppression”, she says. “Somebody making noises is not ruining your theater experience. Can you see and hear the performers? If you can see the show, your experience is not being ruined, what’s happening is that people you’re not used to having to engage with are in the theater and the way they experience culture and the way you experience culture is not the same.” This, Smith says is an opportunity to meet in the middle and create a new norm.

ERiC is more philosophical in his reaction to potentially ruining someone like Duarte’s time at a show. “Theater is about changing lives it about adding something to someone’s lives that they didn’t have when they walked through the door,” says ERiC. “And if it’s not about that, if it’s only about how you want to experience it or how you want everyone else to experience it with you then you’ve lost before you even stepped foot in the theater.”

Giving Duarte the benefit of the doubt, it’s a fair guess to say that when she wrote the piece and Time Out published it, that they weren’t actively trying to negate the way certain cultures respond to a theatrical experience. That exclusivity wasn’t the goal in this fashion. And honestly, had this piece been written ten years ago, it would be easy to pass it off as simply a highly entertaining piece of satire.

Smith herself admits that she could have written a piece like this a decade ago. “But in 2018 to have a legitimate writer for a legitimate publication confer something that could be unwelcoming to diverse people is where the danger lies.”

“To her credit, she calls herself an elitist,” says ERiC. “So I had to read it tongue in cheek in some respects. But it smacks of someone saying you don’t deserve to be in this theater with me, you don’t deserve to be enlightened or changed and that’s ridiculous. Everybody that goes to the theater deserves to be there. We all know what is disturbing and distracting and we can manage that, but you can’t tell people how to experience something.”
KEEP THE HOUSTON PRESS FREE... Since we started the Houston Press, it has been defined as the free, independent voice of Houston, and we'd like to keep it that way. With local media under siege, it's more important than ever for us to rally support behind funding our local journalism. You can help by participating in our "I Support" program, allowing us to keep offering readers access to our incisive coverage of local news, food and culture with no paywalls.
Make a one-time donation today for as little as $1.