Donald Trump is Front and Center in Life is Strange 2 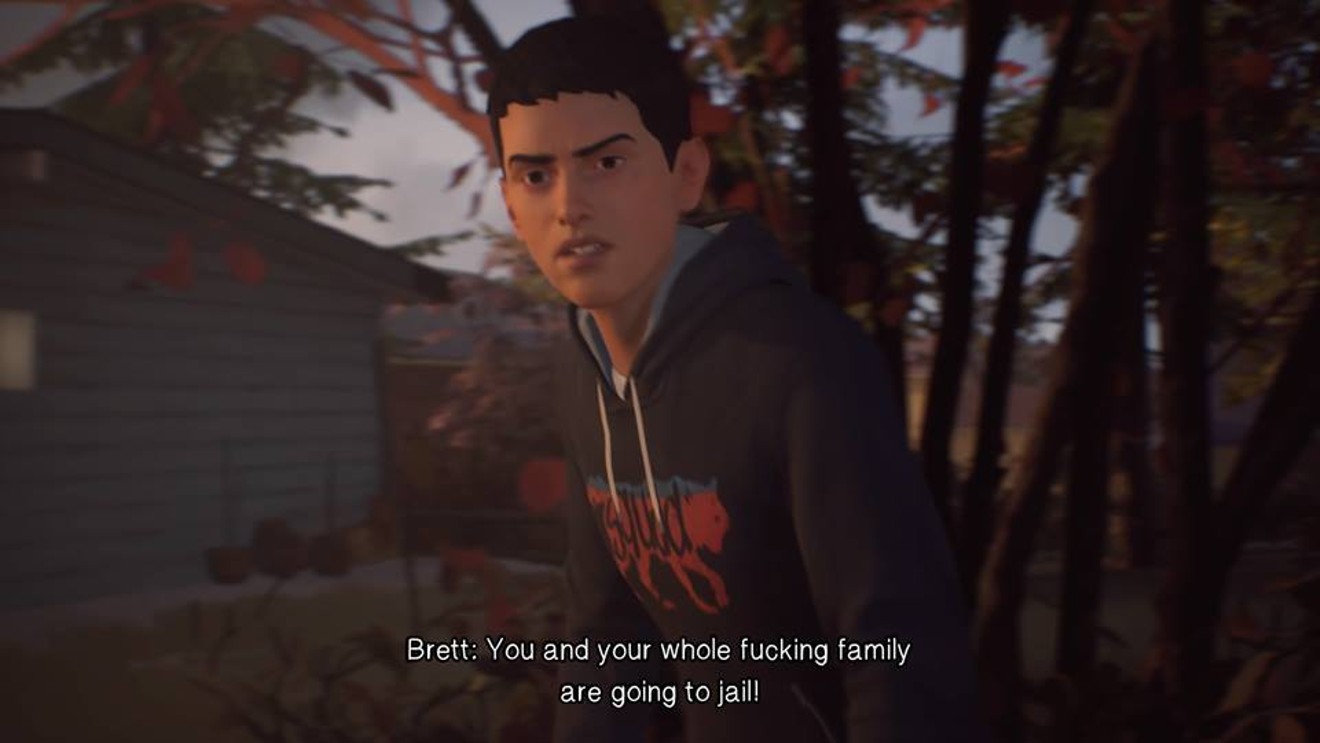 In this new series of five episodic narrative adventures, players control teenage Sean Diaz. He’s on the run after an inexplicable tragedy at his home in Seattle involving his nine-year-old brother Daniel leaves a neighborhood bully, their father and a local cop dead thanks to a manifestation of mysterious power on behalf of Daniel.

The game pulls no punches in establishing that the reason Sean and Daniel run away has everything to do with a world disintegrating into rampant bigotry thanks to the ascension of Trump, making it a contemporary political statement in a way that game development cycles typically don’t allow. Right off the bat players see a conversation between Sean and his friend Lyla via text where the two of them were watching the final debate between Trump and Hillary Clinton on October 16, 2016. The two commiserate on the bizarre and hurtful nature of the whole thing, with Sean later sketching his feelings. 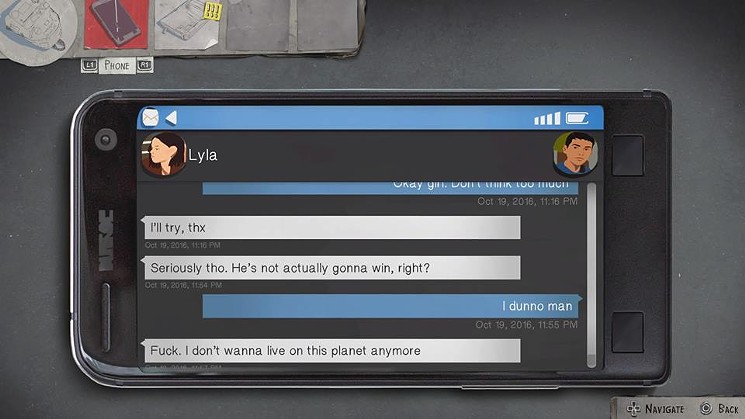 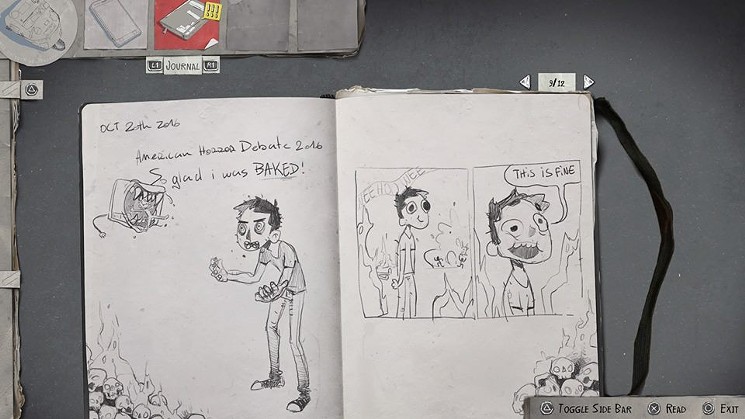 Screencap from Life is Strange 2
The famous wall comes up a lot in the game. Sean jokes about it uneasily and a man who runs a gas station the brothers end up at openly state that they are the reason it needs to be built. Another man and his family sneer at the brothers’ request for aid or food, saying that they had left California to “get away from this crap,” implying that their race has something to do with it.

In fact, there are almost no sympathetic white people seen anywhere on screen in “Roads” (Lyla is Asian). Trigger happy cops, violent rednecks empowered by authoritarianism and uncaring bystanders are all on hand to make the Diaz’ lives miserable as they try to make their way south to their father’s Mexican hometown of Puerto Lobos.

The only positive Caucasian figure is Brody, a wandering blogger and journalist who aids the boys following a narrow escape at the hands of a bigot. A big guy with a bigger heart, Brody apparently escaped his heartless family to live out his life freelance writing and participating in activism.

“Everything is political,” responds Brody.


Though he can’t take the boys the whole way to their destination, he serves as the compassionate voice in an otherwise completely hostile society. Life is Strange 2 tackles some very big concerns for a mainstream release, everything from #BlackLivesMatter to how we treat the children of immigrants. It’s a Statement with a capital S, and I found myself punching the air amazed at how bold it was willing to be. Games just don’t get to be punk rock like this that often. Where the first game tackled cyber harassment, queer romance and rape culture, the sequel broadens its appeal to more national issues. Where games like the BioShock series pretended to grand political statements, Life is Strange 2 puts it all on the table. I can’t wait to see where it goes next.

“Roads” is available now. Further episodes to be released later.

10 Non-Political Thoughts on “Roads” SOME SPOILERS AHEAD

10. It’s nice to see that Dontnod figured out how to make people go up and down stairs without a cutscene.

9. The “sit and contemplate” sections were always a highlight of the franchise, but Sean holding his phone and watching old Christmas videos of his family really took them to a new level. You can’t progress until you throw the phone away forever, and it’s agonizing.

8. The game is not paced as well as the first one. Big scenes hit hard, but they are few and far between. On the other hand, the opening with the dashboard cam blows the Arcadia Bay tornado out of the water in terms of emotional impact.

7. Daniel has telekinesis instead of Max’s time travel ability. Combined with the slow pace, the game it makes it feel closer to Beyond: Two Souls than Life is Strange sometimes.

6. I am really hoping that eventually this franchise evolves into something like Heroes.

5. Arcadia Bay is seen briefly in the game, which takes place three years after the first one. As the town is not destroyed, that implies that the canon ending is the “sacrifice” or “bay” ending.

4. Not giving Sean powers is an interesting design choice. It robs the game of most of the puzzle elements of the first one, which can be both a blessing and a curse sometimes. Instead, it relies more heavily on dialogue options like in Before the Storm.

3. Sean can sketch throughout the game. It’s neat, but it seems kind of pointless. So were Max’s photos, but they took up a lot less time.

2. Syd Matters has turned in another phenomenal soundtrack, though I’m not sure tracks are being used to quite as powerful an effect as the first game.

1. If you’re one of those anti-SJW types, you’ll hate this game. And Good. I don’t want you folks anywhere near things I love.
KEEP THE HOUSTON PRESS FREE... Since we started the Houston Press, it has been defined as the free, independent voice of Houston, and we'd like to keep it that way. With local media under siege, it's more important than ever for us to rally support behind funding our local journalism. You can help by participating in our "I Support" program, allowing us to keep offering readers access to our incisive coverage of local news, food and culture with no paywalls.
Make a one-time donation today for as little as $1.