That is not a birth control pill. Screencap from Super Smash Bros. Ultimate
click to enlarge 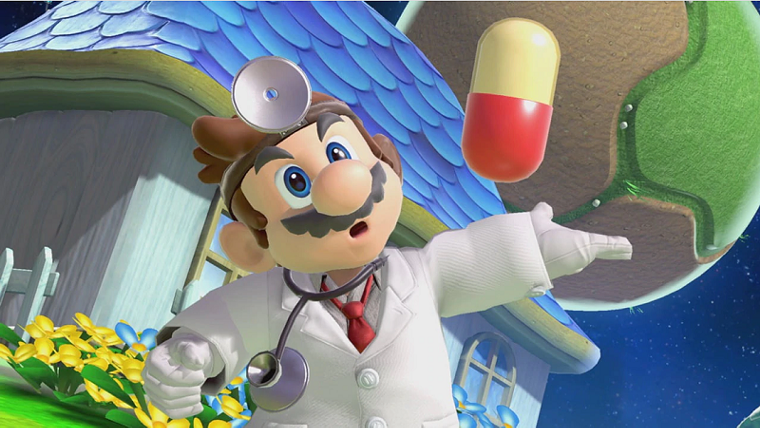 That is not a birth control pill.
Screencap from Super Smash Bros. Ultimate
With the recent announcement of a Super Mario movie, I’ve been thinking more and more about the Super Mario mythology. Specifically, how does a plumber with super jumping abilities who mostly serves as a one-man splinter cell in a magic kingdom have time to also sometimes be a doctor? My theory: Dr. Mario is not Mario himself in a lab coat, but the father of gaming’s most famous mascot.

This is not a wholly new theory. Daniel Kibblesmith proposed the idea of Dr. Mario being a third Mario brother in 2019. The fact that Mario is a surname has been established by both Nintendo and creator Shigeru Miyamoto, and it makes it possible that Mario Mario and Dr. [Unknown] Mario are separate characters. It would certainly explain how Mario had time to complete a medical degree between adventures. He didn’t have to because that's not him.

However, I never liked Kibblesmith’s explanation because it hinged partially on breaking what little canon there is in the series. Kibblesmith proposed that the Mario Brothers are actually triplets, which is why Mario and Dr. Mario look exactly alike. If that was true, though, why wouldn’t we see Dr. Mario in Yoshi’s Island when Baby Luigi is kidnapped? There are clearly only two brothers in that story.

It would actually make much more sense if Dr. Mario was not a brother, but the twin’s father. It would still explain why Mario and Dr. Mario are spitting images of each other, and it doesn’t require us to wonder why we never see Dr. Mario as a baby.


There is some in game evidence to support this idea as well, though not in the main series. In the Smash games, Dr. Mario is a near-clone of Mario, but there are some differences. One is the fact that he is programmed to appear slower and more powerful as a character in Melee. Smash creator Masahiro Sakurai drew special attention to this when he added Dr. Mario to the game, joking that Dr. Mario now seemed like an “old man.” Of course, he also said that Mario and Dr. Mario are actually the same character, though he might have meant from a programming standpoint rather than a narrative one. This is backed up by Sakurai talking at length about how he couldn’t change moves or animations for clone or “echo” characters. He ultimately left the matter open to interpretation.

“In reality, I think there will be two camps, where people are split between Mario and Dr. Mario being ‘basically the same,’ and being ‘completely different,’” he said.

In a way, having a successful doctor father sort of explains the way Mario and Luigi operate. Mario, who looks just like his dad, fumbles around in labor positions like carpenter and plumber until he finally shines as the hero of the Mushroom Kingdom. He might not live up to his dad professionally, but he at least gets the glory. This would also tie into the popular theory that only the first Super Mario Bros. actually happened and everything else afterward is just a kind of recreation meant for Mario to relive his best moments. If you had to sit at Thanksgiving and listen to your dad wonder why you never became a doctor, you might bust out proof of your success, too.

We also know that Luigi tends to live in his brother’s shadow, playing cowardly second banana and rarely asserting himself for his own accomplishments. Since Mario never seems anything but totally supportive of Luigi, I always wondered why Luigi was so anxious. Now it’s clear. It wasn’t his brother Luigi was comparing himself to, but his famous disease-curing dad. It’s led to Luigi actually embracing the complete opposite of a scientific career in ghost-hunting, as well as finding a new father figure in Professor Elvin Gadd.

Granted, this theory paints a dismal picture of the Mario family dynamic. For it to totally work, Dr. Mario kind of needs to be a self-involved jerk whose expectations drove his sons into dangerous adventures. It’s also possible that Nintendo just thinks it’s funny to make Mario be a doctor sometimes and there’s no point in delving too deeply into the matter. Either way is fun, which is the point of Mario in the first place.
KEEP THE HOUSTON PRESS FREE... Since we started the Houston Press, it has been defined as the free, independent voice of Houston, and we'd like to keep it that way. With local media under siege, it's more important than ever for us to rally support behind funding our local journalism. You can help by participating in our "I Support" program, allowing us to keep offering readers access to our incisive coverage of local news, food and culture with no paywalls.
Make a one-time donation today for as little as $1.