Drink as Friends with the Drunk Shakespeare Society 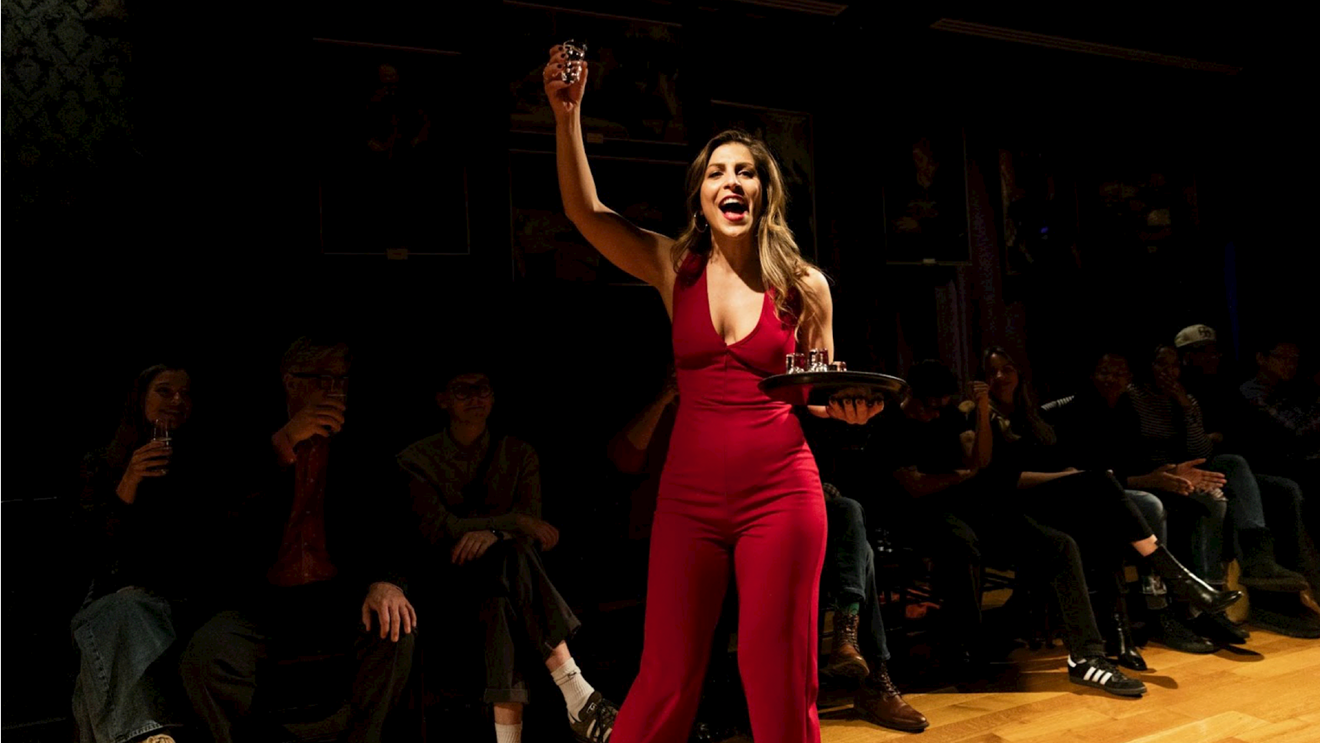 The Drunk Shakespeare Society brings the Bard and booze to Houston. Photo by Travis Emery Hackett
If there’s one thing missing from the Houston arts and culture scene, it’s an interactive Shakespeare comedy hybrid.

“We felt like something like this doesn’t really exist [in Houston] yet, so it was a good place to make a home,” says Klages. “We know that we’re unique and hopefully we can stand out to customers and bring them something that they haven’t seen before.”

The concept, originated by Scott Griffin and David Hudson in New York in 2014, is straightforward: Five actors gather. One downs five shots of whiskey and then the group tries to tackle one of the Bard’s plays before a curious audience.

Unlike out-of-town productions that mass transplant an existing show, Klages says Drunk Shakespeare started from the ground up in Houston, a many years-long, from-scratch process that began with scouting real estate and building out the venue to finding a local bartender and conducting an extensive audition process for local talent. The hard work, however, pays off in making the finished product feel really personal to its new hometown.

“The local actors bring their own voice and identity and get to weave in the fabric of the city that they live into the show so each show is incredibly unique,” says Klages. “I like to say it’s like a new season of your favorite TV show. You get all new information about the characters and the rules of the world. That’s what it feels like when we come to a new city, because we really expand the horizon for what the show is to suit the city that we are in.”

And the importance of the local audience can’t be understated, as they are a key player equal to that of the cast in an interactive theater production like Drunk Shakespeare.

“They might influence the events of the evening, they might be used as participants in the show or just shape the comedy that gets thrown out depending on what the audience responds to,” says Klages.

Despite estimating that she’s watched the show around 3,000 times over her eight years with the company and has collected a lot of data on how the audience likes to behave, Klages says ultimately, how the audience responds is unpredictable.

“We always get curveballs,” says Klages. “I like to tell the actors that I’m going to give them a toolkit of different things that they can take out of their toolbox depending on what happens. But I never really tell the actors explicitly if X then Y do this, because the second I lock them into staging that I want to keep throw a drunk actor into the mix and it’s out the window.”

Because yes, the drinking is real.

“We verify that [the actors] really drink on stage in front of the whole audience every night,” says Klages. “We invite an audience member to come select a shot from the tray that the actor will drink – they can pick any one they want – they verify that it’s real and the actor drinks live on stage right in front of the rest of the crowd.”

Klages adds that “there’s nothing fake about what’s happening in the room” and even the space – comprised of more than 8,000 recycled and upcycled books filling a functioning, rainbow spectrum library – matches that authenticity.

Though Klages says the actors “train like the Olympics for their drunk show” and the company approaches the drinking aspect with a load of safety precautions in place – including the drinking schedule set well in advance, a rotating company to ensure no one drinks every night and a car home after the show, just to name a few – the most important aspect to performing Shakespeare drunk is pretty simple: Can you perform Shakespeare at all?

“You can’t really parody something if the foundation isn’t there in the first place,” says Klages. “We want someone who understands the text and channels that text in a way that people really understand so they bring clear emotion, they bring a lens of 2023 with pop culture woven in, [and an] approach to the text without too much preciousness.”

In terms of the exact Shakespeare play the actors will perform, well, Klages is cagey. She wants to keep it a surprise for the audience. She does, however, give a little hint: It’s a tragedy.

“Because we approach the show in a comedic way with drunk actors, we think it makes the most sense to present a tragedy as the base production,” says Klages. “If you talk about a play that involves heavy drama moments and then put a drunk actor into that, there’s where the comedy comes through.”

You can count on that comedy to be fairly positive too.

“Comedy can sometimes tend really negative or down, and the audience might chuckle at it, but it doesn’t make you feel genuinely good about your experience,” says Klages. “It’s not really the tone we want in the room. We want people to come in and be supportive, feel welcomed, [and] push boundaries a little if they’re comfortable.”

Drunk Shakespeare also offers “The King” experience, a luxury $500 experience that comes complete with a throne and crown, champagne and treats, and (of course) decision-making powers during the play. Learn more about the experience here.
KEEP THE HOUSTON PRESS FREE... Since we started the Houston Press, it has been defined as the free, independent voice of Houston, and we'd like to keep it that way. With local media under siege, it's more important than ever for us to rally support behind funding our local journalism. You can help by participating in our "I Support" program, allowing us to keep offering readers access to our incisive coverage of local news, food and culture with no paywalls.
Make a one-time donation today for as little as $1.