How the Age of Ike Extended Well Beyond the Fabulous '50s

We all know Ike, right? Had that famous campaign slogan. Hero and leader U.S. forces in World War II. Avuncular, grandfatherly type whose blandness was a trademark and who probably liked to spend more time on the golf links than in the briefing room or in the Oval Office. That's DDE in a nutshell, right?

Well, no. What Hitchock had done here in probably the definitive biography of our 34th president and his two terms is not only upend that image, but argues that Eisenhower's time at the helm was not only incredible active, challenging, and reflective of the times, but set the stage for what happened in the '60s and beyond. 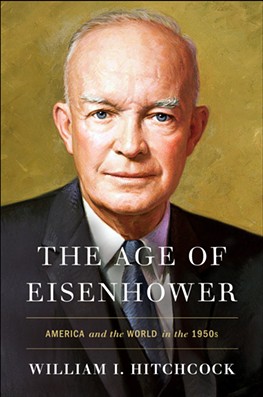 Book jacket by Simon & Schuster
The author also argues that Ike's presidency was not just a postscript to a military career for the old soldier who he notes was "a much shrewder politician than he let on" and "jumped into electoral politics with gusto" aiming to "fix the mess in Washington" when running for the office — red meat for a conservative base looking for a savior from the long-running Roosevelt and Truman shows.

And to think in 1939, Eisenhower was a 49-year-old Army lieutenant colonel stuck in the Philippines and pondering his future. Three years later, he was commanding the entire European theater of World War II for the United States and most of its allies.

Just a sampling of the issues and personalities Eisenhower faced during his presidency between 1953-61: Ending the Korean war; the Sputnik space race; Chairman Mao of China and Nikita Khrushchev of the Soviet Union; the Suez Canal crisis; the division of Berlin; China/Taiwan conflicts; overthrowing the government of Iran; Joe McCarthy's Commie witchhunt; the Castro-led Cuban revolution; expanding social security and the country's interstate highway construction; the U-2 spy plane incident; the origins of the CIA (and their secret wars), military/industrial complex, and NASA. And American's increasing involvement in this little conflict between the French and the indigenous people over in Vietnam…

Hitchcock posits that Eisenhower's leadership and work in all of these topics tended to be behind the scenes, quietly pushing an agenda or putting a bug in people's ears to be more vocal or prominent on an issue. Whether he felt that this was a more effective way to govern or it would allow him plausible deniability is another story. Soldiers of the 101st Airborne escort black students into Little Rock High School, September 1957.
Photo courtesy of Simon & Schuster
But of all the national issues during Ike's administration, perhaps the most important was the burgeoning struggle of black America. The Civil Rights Act of 1957 pleased neither side of the issue, and despite the decision of Brown vs. the Board of Education, many southern states resisted integration or the dissolution of Jim Crow laws.

History and this book show that Eisenhower was admittedly slow and reluctant to embrace the concept, deferring to "state's rights" and assuming integration would happen "gradually." But when images of the mob scenes and violence surrounding Little Rock 9 schoolchildren simply trying to attend class were too much to take, Ike sent in the Army to ensure order.

Eisenhower was no champion of civil rights and wary of certain black leaders, but could get behind the concept of law and order, and viewed his actions in those terms. Just as he hewed to his own personal lifelong concepts of discipline, restraint, and self-reliance. And few presidents in U.S. history exuded the impressive moral authority that Eisenhower could.

So while the "age of Eisenhower" is often viewed as the mid/late 1950s, what Hitchcock has done with this book is not only reevaluated the man's entire presidency, but shown how Ike's true "Age" extended well beyond the confines of that decade.