Reviews for the Easily Distracted 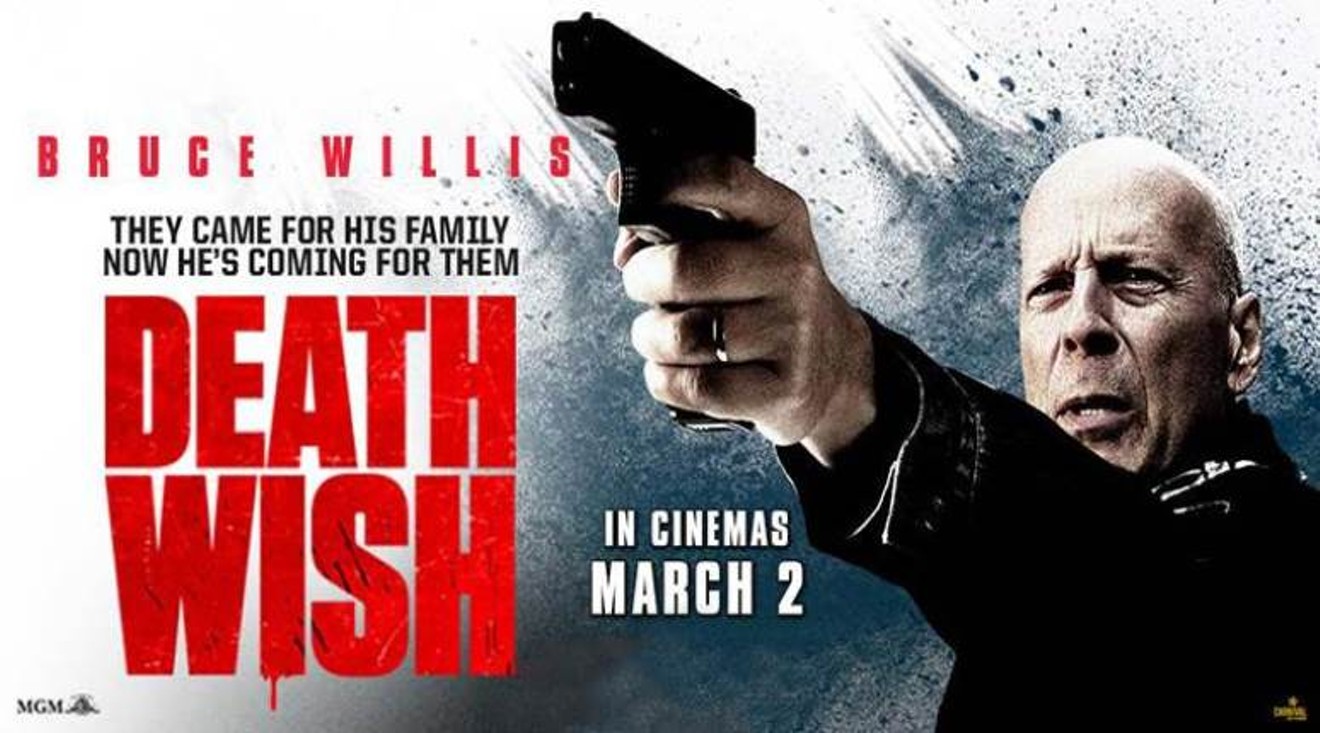 Rating Using Random Objects Relevant To The Film: 0.5 Paul's Boutiques out of 5.

Wikipedia
Tagline: "They came for his family. Now he's coming for them."

Better Tagline: "You don't look too bad, here's another."

Not So Brief Plot Synopsis: Paul Kersey (Bruce Willis) has it all: a successful surgical career, a home in the Chicago 'burbs, his beautiful wife Lucy (Elisabeth Shue), and daughter Jordan (Camila Morrone), who's about to set off for college. But after a botched burglary puts his daughter in a coma and his wife in the ground, Dr. Kersey writes out a new prescription: pain.

Yes, that's pretty bad, but even money says it's one of the taglines Eli Roth actually tried out.


"Critical" Analysis: The original Death Wish, released in 1974, was widely seen as a reaction to a rise in violence in America's cities and, along with Dirty Harry, is regarded as signifying a shift in popular attitudes towards crime. Grotesque as it was, you can see the origins of movie vigilantism in movies like it and Straw Dogs, which spoke to a burgeoning conservative mindset following the apparent failure of the peace and love movement.

Given the overall decline in violent crime and the current, uh, consternation around the NRA and guns in particular, releasing a remake at this point in time seems artless at best, and cynically opportunistic at worst. Unfortunately, as is often the case where Eli Roth is concerned, one has to assume the latter.

Any questions about whom the new Death Wish is aimed at are cleared up pretty quick. The movie opens with frantic news snippets about the epidemic of violent crime in Chicago, some presented by none other than "Mancow" Muller, a right-wing radio host who once had a reality show called God, Guns & Automobiles. Muller actually pops up several times, ostensibly to ask his listeners if they agree with the unknown vigilante's actions. Unsurprisingly, most do.

Still, the movie plays it straight for a time. Roth sets the stage of the happy family and the nonconfrontational Kersey (demonstrated by his dealing with an incongruously profane soccer dad). It isn't until after the crime, when he's driving back from Lucy's funeral with his father-in-law (who takes a rifle to some would-be poachers), that Death Wish takes the first of several inexplicably hilarious turns.

[The father-in-law makes a speech about "protecting one's own" while standing over a mortally injured fawn in a scene so ham-handed in its symbolism it probably violates Jewish dietary laws.]

After Kersey is roughed up by some hooligans, he decides to get strapped. The local gun store, however, is filled with cameras and pesky federal paperwork (which the perky blonde proprietess assures him won't be a problem), so it's just dumb luck (deus ex magnum?) when a Glock falls out of the pocket of a patient in Kersey's trauma ward. Before you can say, "Hippocratic, Shmippocratic," he's sportin' a hoodie and dealing death to street toughs in a spree that soon has him labeled "The Grim Reaper" by local media.

It should be noted the Kersey in the original Death Wish never actually found the guys who victimized his family, but that's not really an option in today's unambiguous vengeance flicks. After warming up on a few gang bangers, Kersey lucks into finding the guy who fed his address to the home invaders (his must be the only hospital they take gunshot victims to in the entire city). Armed with this information, Kersey enters his endgame, working his way up the chain by torturing dudes in a way only medical professionals could understand.

On one hand, you have to admire the consistency of Kersey's mindset. For him, all crimes deserve the severest punishment imaginable: carjacking? Death. Drug dealing? Death. Luggage theft? If Kersey's finger gun gesture (a callback to the original movie's ending) is any indication, that's a death.

At least give the luggage guy an "or cake" option.

It's nearly impossible to filter out among all the dog whistles and 'stand your ground' fetishism, but maybe the original script (written by The Grey's Joe Carnahan) contained a scene where Kersey did some soul searching before turning from the path of healing to that of murder, but late-career Willis no longer gives a shit about expressing it. And Roth would've just blared AC/DC's "Back in Black" over it anyway (twice!). This isn't trash, because trash is something you can enjoy on a visceral level, even if you secretly find it embarrassing. Death Wish is just garbage.