The Emancipation of Evil-Lyn 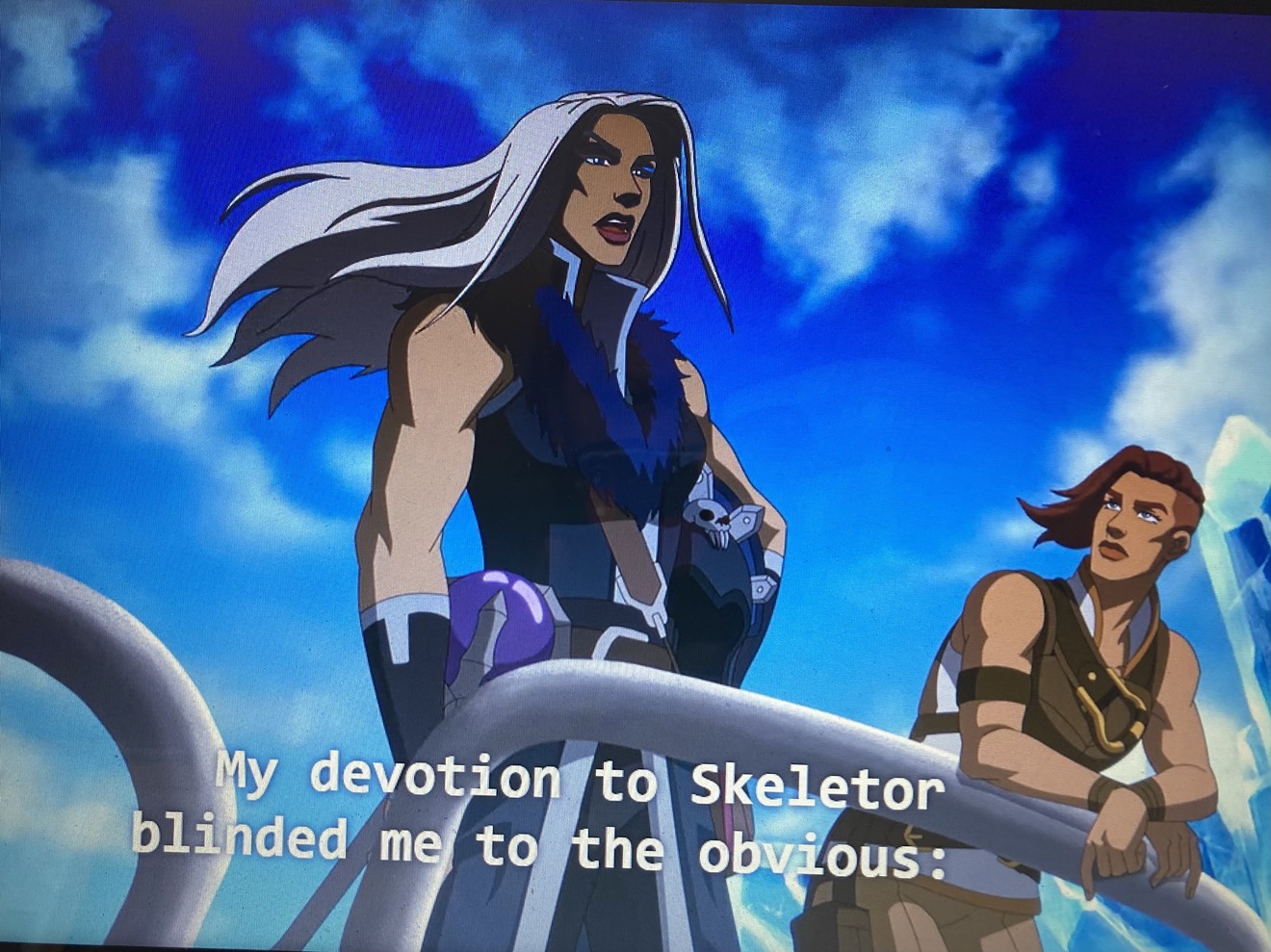 The new Netflix Masters of the Universe series surprised me in a lot of ways, but the biggest one was that I started to care a lot about Evil-Lyn. Played by Lena Headey, it’s definitely her show and one of the finest portrayals of an action figure cartoon character ever done.

Masters of the Universe: Revelation has gotten a lot of hate from people who felt that it was deceptively marketed, and that’s not an unfair criticism. The trailer, set to Bonnie Tyler’s “Holding Out for a Hero” made the show look like it was going to be a shot of straight ‘80s cheese directly into the veins of classic fans, with He-Man as the main character. Instead, the Champion of Grayskull is forced into a noble sacrifice in the first episode, leaving behind a complicated world where magic is dying and some of the universe’s most foundational relationships are shattered.

The set up gives producer Kevin Smith a remarkable toy chest to play with, and he uses it to full effect. Teela (Sarah Michelle Gellar) is now a jaded anti-magic mercenary who wants nothing to do with her old life. After the loss of Skeletor (Mark Hamill), his henchmen have started a cyberpunk cult that transforms people into cyborgs. It’s a strange and grim version of a formerly lighthearted place, and yet it’s still silly enough to have villains like Stinkor played by Jason Mewes in it.

Teela may be the main character, but this is definitely Evil-Lyn’s show. With Skeletor gone and her magic power waning, she conspires with the forces of Grayskull to save the universe by recovering He-Man’s lost sword. This starts out with her trademark deception and scheming, but it becomes very clear within the first two episodes that she has changed a lot since the final battle between the show’s perennial main heroes.

It’s impossible not to draw comparisons between Evil-Lyn and DC Comics’ Harley Quinn, and with the casting of Hamill as Skeletor it’s pretty clear that Smith meant us to do so. While it’s never really implied that Lyn suffered at Skeletor’s hands the same way Harley did at the Joker’s, there’s still a sense of madness and pain at the center of the relationship.

About halfway through the series (I binged all five episodes without really meaning to), Lyn gives a speech to the group as they search for the exiled Man-at-Arms, who Lyn refers to as the most dangerous man in Eternia. Despite their need for his skills, Lyn supports Teela in her desire to have nothing to do with her adopted father, saying that she too knew what it was like to follow a dangerous man.

Headey’s performance of Lyn is incredibly subtle. She’s not so much a jaded abuse survivor as she is someone who realizes that she has let her life be in service of someone else’s dreams. There’s obviously some Cersei Lannister there, the would-be queen always relegated to pawn status by compelling but inferior men. Over the course of five episodes, she learns what it’s like to lead and have others trust her leadership.

The transformation is also physical. As the team approaches the land of the dead, she doffs her iconic helmet to let her gray hair free in the wind. It’s a weird moment that literally makes you look at the character with new eyes because she’s no longer dressed exactly like a half-remembered action figure from your youth. You see that she is older than you might have first believed, her arms are muscled and strong as she holds her headpiece, and her eyes a piercing blue full of a very violent life.

It’s not the first time she’s been drawn that way over the years, but it’s definitely the most striking. You can see the new character she is becoming in that moment on the Crystal Sea, and it’s just mesmerizing.

Later, she is trapped with Orko in the land of the dead trying to fight off a giant shadow beast. Both of their magic powers are all but drained, and the two are reduced to playing hide and seek in a library. Without losing a bit of her cutting edge, Lyn opens up to Orko. She listens to his own story as a side character, how he never lived up to expectations, and conveys her own pain as she comforts him. The moment frees them both to be who they want to be and allow them to combine their forces.

Unfortunately, Orko is killed protecting the party not long after. At his grave, Lyn sets her helmet next to the flowers that have been put there. Her only eulogy is that Orko was a fool, but the way the line is delivered is full of pain and meaning. It’s clear she saw aspects of herself in Orko’ struggle with confidence and acceptance, how he let his wondrous abilities play comedic and ineffective foil to He-Man the way she stood in Skeletor’s shadow. You can hear the rest of her sentence even if she never says it: and so am I.

I don’t know where the show is going after this. Lyn appears to rejoin the resurrected Skeletor in the final cliffhanger, but I doubt Smith brought us this far to simply break our hearts forever. It’s Evil-Lyn’s journey now, and I can’t wait to see what she does next.

Masters of the Universe: Revelation is now on Netflix.
KEEP THE HOUSTON PRESS FREE... Since we started the Houston Press, it has been defined as the free, independent voice of Houston, and we'd like to keep it that way. With local media under siege, it's more important than ever for us to rally support behind funding our local journalism. You can help by participating in our "I Support" program, allowing us to keep offering readers access to our incisive coverage of local news, food and culture with no paywalls.
Make a one-time donation today for as little as $1.