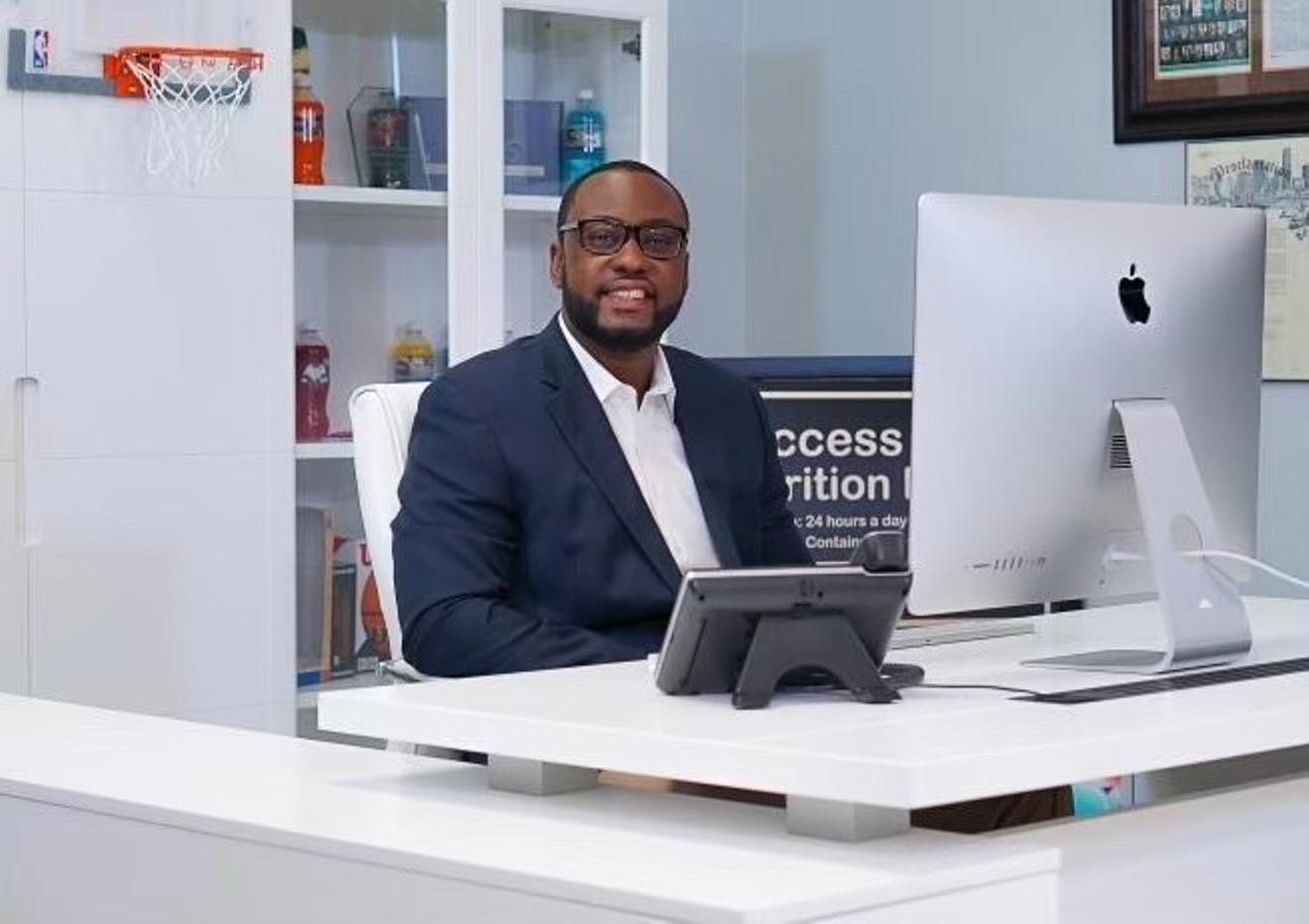 Charleston Wilson helms a growing beverage empire Photo provided by Exotic Pop
“I had a trunk full of soda weighing down my little car and nowhere to go with it,” laughs Charleston Wilson as he clears product off the boardroom table in his warehouse office. “I picked up my phone and made a post saying I would deliver for free to anywhere in Houston. That’s how this all started.”

What was getting started was the growing beverage company Exotic Pop. Wilson, traveling back and forth between Houston and Louisiana, would buy sodas exclusive to the Creole State and then resell them here in the city at a local barbershop. The plan was foolproof until, after Wilson spent an entire paycheck on more soda, the barber let him know he didn’t need any more product.

The news was a setback, but it set Wilson up to move beyond supplying just one barber shop. He began creating relationships directly with the consumer and local businesses, using his Instagram page as a crash course in marketing. Wanting to create a lane in the fiercely competitive beverage market, he chose to call his drinks by the northern slang word, pop. Then, because he was bringing drinks from one region to an unfamiliar region, he went with the name exotic. Moving sodas from one region to another wasn’t a new idea but Wilson’s eye for marketing quickly helped to propel him forward.

“I’m actually just following in the tradition of rappers here in Houston like the Screwed Up Click, recalls Wilson. “They would go on tour up and down I-10, bringing soda back with them that we had never seen. A lot of people don’t know soda is sold in regions. You might have a peach soda that sells well in one area meanwhile people in another area have never heard of it.  Sometimes people think a soda is discontinued but its actually just being sold a few regions away.  We connect people with the products they love that might not be in their local store.”

While the Southside S.U.C gave him the blueprint for a possible business it was a Northside MC that helped to propel things toward the future.

“Paul Wall was the first celebrity to post Exotic Pop. Once he did that it opened up the door for other rappers to come. Some wanted Exotic Pop for nostalgia while others just wanted to show that they had something exclusive. Rappers would hop in my DMs and buy cases and palettes of drinks just to make sure they were the only one to have it.” 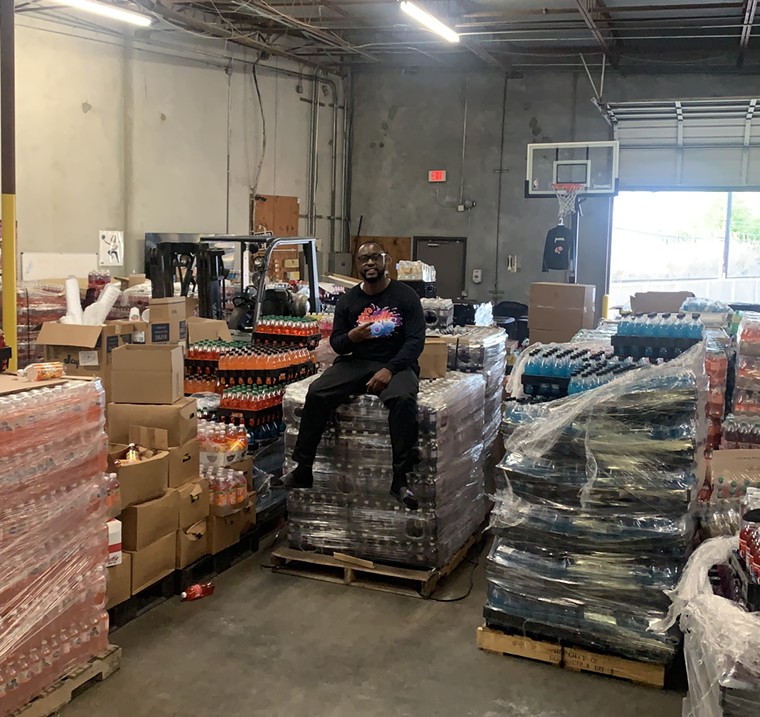 Wilson sits atop a shipment waiting to be sent to his distribution network.
Photo by DeVaughn Douglas
After the Paul Wall endorsement it wasn’t just rappers reaching out to Wilson. People from all over the world began to request rare sodas or offered to sell him drinks from their own regions. What started as state-to-state business quickly branched into Wilson moving drinks from country to country. Artists like Drake, Lil Wayne, Diddy, and more began to support the brand, posting on their own social media accounts about rare sodas they could get from Exotic Pop. While some people would only focus on the newfound attention social media was bringing, Wilson took a step back and continued his grassroots marketing campaign.

“I appreciate anyone who supports me and when I looked back it was the local community here in Houston that kept me afloat in the beginning,” recalls Wilson as he walks through rows of product in the warehouse. Aisles of rare soda, chips and candy fill the shelves around him. Fruity Pebbles Candy bars sit alongside chocolate Dr Peppers. Canada Dry Vanilla Cream ginger ale is stacked up against boxes of peach cobbler Pop Tarts. The rap community helped expose Wilson’s rare collection of soda and candy to the rest of the world and when the time came, he wanted to return the favor.

“I want to make sure that the artist and ambassadors we have to represent the brand are a part of the growth. When they are holding the double white cup with our logo across the front, they are representing themselves just as much as us.”

To emphasize the ambassadors Wilson began expanding from simply reselling. After moving so much product Pepsi gave him the ability to create his own flavors and with each new flavor came a branding opportunity. Exotic Pop began naming sodas after local rappers and sharing sales proceeds with them and their families. DJ Screw, Big Moe, Fat Pat, Bun B, Big Hawk, Pimp C, Mac Dre, and Lil Keke are just a few of the many MCs that have their own flavored drink.

When artists like NBA Young Boy and 21 Savage drop music their record labels reach out to Wilson to develop their own unique soda for the album roll out. When Killer Mike's show on Netflix featured sodas named after the Bloods and the Crips so many people that Exotic Pop was already involved that eventually the brand partnered with the Atlanta MC and released the product for real.  Wilson has expanded the beverage brand to various cool cups, soda, water and more with each new flavor bearing the face of a celebrity ambassador. He even has a brand of water for pets coming to local grocery stores.  Partnering with local rappers in various regions is intentional as Exotic Pop make sure a large part of their business is giving back.

“Whenever we move to a community, we are trying to offer opportunities to improve it. Plenty of people want to be ambassadors but we look to artists that are involved at the local level. We make sure to work with them so that they can give back. I want to see these artists grow just as much as I want to see the communities that they came from flourish.” 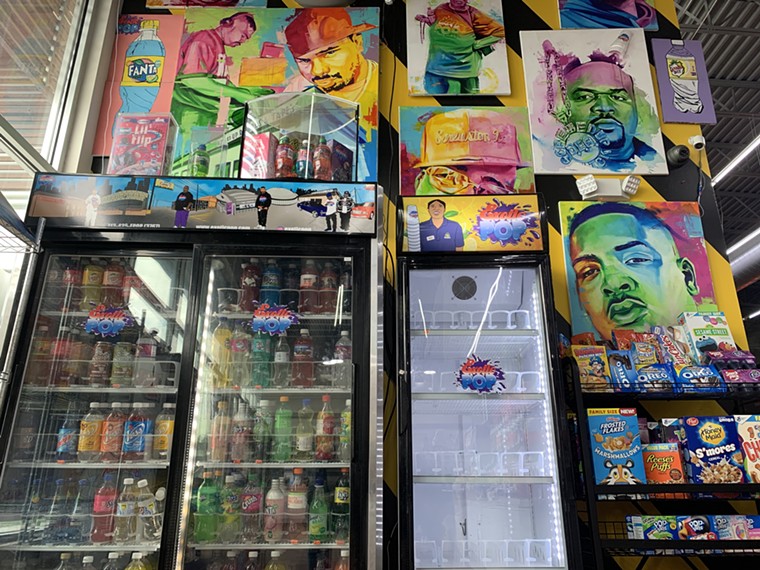 The Exotic Pop section of the Busy Bee on OST features a full selection of their products.
Photo by DeVaughn Douglas
Wilson makes sure the families of MCs that have passed away receive proceeds from the sales of product with their likeness. After the tragic murder of army soldier Vanessa Guillen, Exotic Pop released an alkaline water in her honor with all proceeds going to the Guillen family. Exotic Pop regularly partners with local school districts making sure to support consumers just as much as the brand is supported by them. That mission has Exotic Pop growing, not just here in Houston, but throughout the United States and beyond.

The brand already has flagship stores on the west and east coasts with Wilson currently overseeing the creation of a store here in Houston next to the Turkey Leg Hut. The models for the shop are ambitious, boasting a stage, and event area, and plenty of places to feature Exotic Pop’s ever-growing stable of merchandise, including food, drinks, clothing, cups, and more. Exotic Pop has also moved into the music business, starting to represent artists from the local scene. There are more flavors on the horizon with an entire line of cream sodas, one of which is a partnership with legendary west coast MC Snoop Dogg. And while the brand expands with property product, and personalities Wilson believes the key to his success is to remain humble.

“There was a point when I had a couple of stores carrying product here in Houston. I had a nice little apartment and a nice car,” he remembers as he looks at plans for the new flagship store. “I was comfortable. Then my car was wrecked. I realized I didn’t even want the car. I grabbed a cash car just like when I was selling to the barber. I couldn’t let the comfort stop me from growing. Now I’m here. I’m growing, my family is growing, I’m helping my community grow, and I’m helping the Hip Hop community grow. I just want to keep growing.”
KEEP THE HOUSTON PRESS FREE... Since we started the Houston Press, it has been defined as the free, independent voice of Houston, and we'd like to keep it that way. With local media under siege, it's more important than ever for us to rally support behind funding our local journalism. You can help by participating in our "I Support" program, allowing us to keep offering readers access to our incisive coverage of local news, food and culture with no paywalls.
Make a one-time donation today for as little as $1.