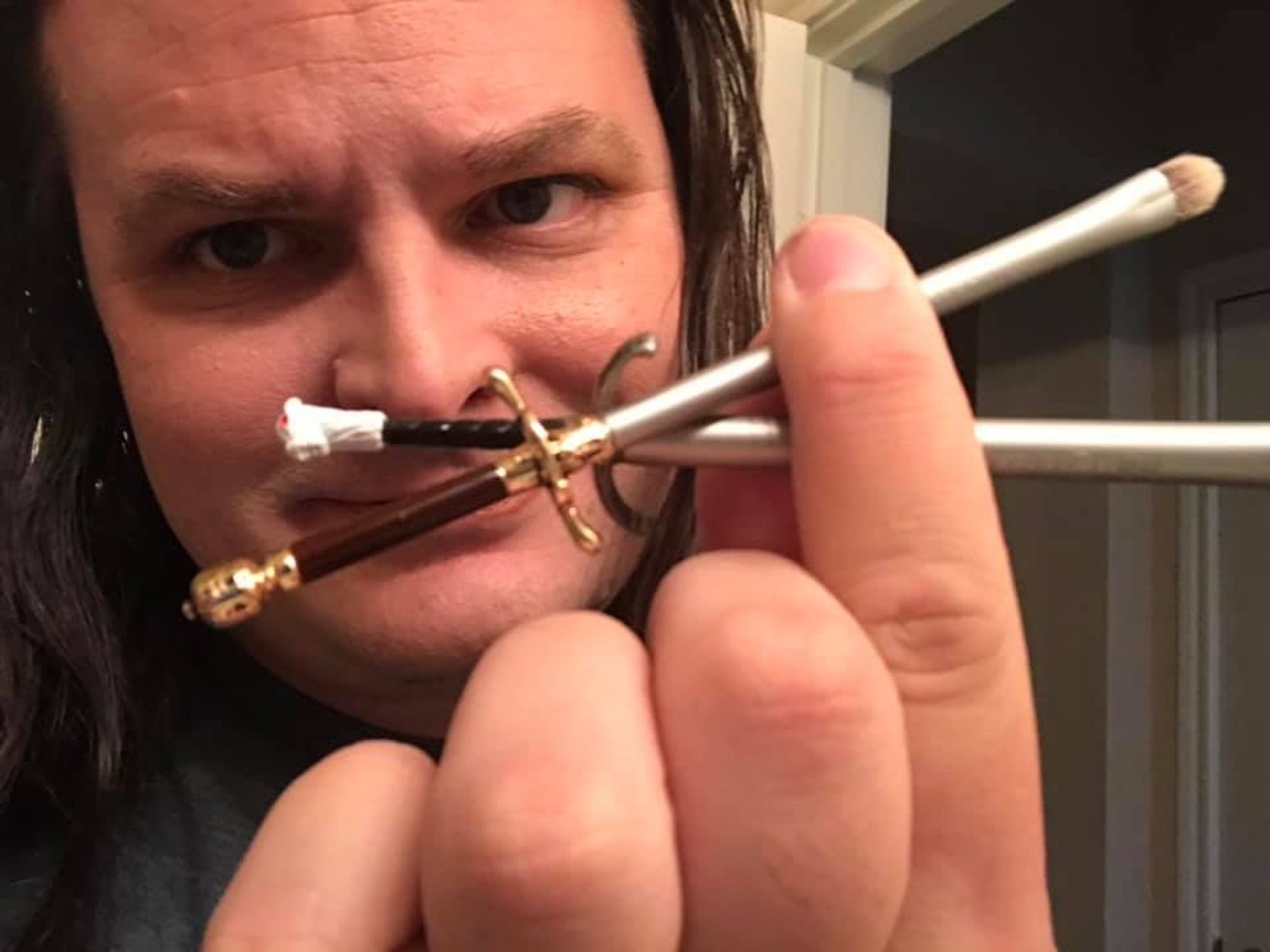 Needle and Longclaw make-up brushes. Photo by Jef Rouner
Urban Decay sent me their limited edition Game of Thrones collection, and it occurred to me that I hadn’t worn make-up in around ten years. There’s not a lot of call for getting all gussied up when you work at home and the only people to impress are your cats. However, since we’re all in a fever pitch with the final season and Houston Press has me doing weekly hot takes, I decided it was time to try out some shimmery goo… MAN STYLE.

Or rather, I was going to do it all myself, but my wife heard we were playing with make-up on a Thursday and decided I was going to be her living sketchpad. The result is a collaborative effort.

I used a few of my friend Amanda's photos as her set was brand new when she decided to take pictures, unlike mine.
Photo by Amanda Method

The (cardboard) Iron Throne
Photo by Amanda Method
First thing, the collection is remarkably well-done. This is not a cheap, weird tie-in like those Mountain Dew cans with Arya’s kill list. The palette comes with 20 shades in four themes, and contain pigments perfect for most skin tones. Like a lot of Urban Decay, it’s fairly expensive but you get a ton for your money. Despite all the little extras like the fold-out Iron Throne, it’s priced well-within the range of comparable products they offer. Too many companies use licenses as an excuse to overcharge. I’m looking at you, LEGO Stranger Things which is $40 more than a non-licensed set of comparable size. You could definitely use this as a daily make-up set, not just for novelty.

'Sup?
Photo by Jef Rouner
So… this is me. As you might be able to tell I’m wearing foundation way too light for my skin tone because I haven’t bought my own in a long time. I also have the deep-set eyes and grim pallor of a Lovecraft protagonist, which is great when I’m taking author photos for my horror story collections but is not exactly glamorous.

To try and make my sunken AF face pop, we went with the Lannister side of the palette, which is full of vibrant red and golds. I pulled most of the look idea from Jackie Wyers on YouTube, which you should watch because she’s awesome. On the lids we used mostly House Lannister, with some highlights of Casterly Rock and Red Keep blended around the lids to try and put some shine underneath the shadows of my brows. King’s Landing was definitely the brightest thing I’ve ever put on my face after years of skulking through goth concerts covered in blues and blacks, and blended up through my Gandalf eyebrows it actually did make the whole effect sparkle.

The Lannister Gold eyeliner is also top-notch. Creamy and smooth, it goes on easy and pops the eye admirably. The eye shadows get all the hype, but Urban Decay does not skimp on its eyeliners.

The highlight palette is a must
Photo by Jef Rouner
This is the Mother of Dragons highlight palette, and it’s not something I would have ever gotten if Urban Decay hadn’t included it. This is probably the best thing in the whole collection. It’s three shades inspired by the three dragons on the show, and it comes out of the box with an artful representation of a dragon egg. It’s neat just because of that, but the three highlight shades can be used on cheeks and noses to really sculpt a face in attractive ways. It can also be used as eye shadow if you can’t afford the whole palette. Get this if you get nothing else.

We finished the look off with the Cersei lipstick. I tried the Sansa Stark nude shade first, but it’s much more of a “I have a meeting today and I want to look pretty but not have to deal with too much attention” vibe to it. Cersei is much more “stall your balls or I will hurl you out of my presence with a trebuchet” bronze, which I find matches my needs these days. Side note: literally every container in the collection contains the most fabulous flavor text about how exactly you can use your look to crush your enemies. It’s like a daily affirmation, and I suggest saving them.

'Sup?, but with glitter this time
Photo by Jef Rouner
I like it. Make-up is fun, and it’s for everyone who wants it regardless of gender, orientation, size, abledness or whatever. You put it on as an investment in yourself, and it just feels wonderful. Even if you’re like me and all you did was sit around in it wearing a Doctor Who T-shirt and typing, it’s worth doing for yourself once in a while.

Urban Decay definitely captured the spirit of the show with great attention to detail. If you’ve been looking for a present for yourself in the make-up department, you could hardly do better. Oh, and the collection also has tiny swords as make-up brushes (pictured at the top). They are more novelty than practical and probably won’t replace your daily ones, but they are surprisingly functional and cruelty-free to boot.

I cannot yet comment how the make-up stands up to biting your lip in a tense scene or crying when your favorite character dies. When I find out this weekend, y’all will be the first to know.
KEEP THE HOUSTON PRESS FREE... Since we started the Houston Press, it has been defined as the free, independent voice of Houston, and we'd like to keep it that way. With local media under siege, it's more important than ever for us to rally support behind funding our local journalism. You can help by participating in our "I Support" program, allowing us to keep offering readers access to our incisive coverage of local news, food and culture with no paywalls.
Make a one-time donation today for as little as $1.