In other words, they’re used to not being fully in control of their appearance at times. But what about when it’s not for a role? What about when they, like all of us, find themselves isolated at home during a pandemic, unable to maintain the kind of grooming they’d like?

Theater folks are people after all, and trust us, they’re having the same appearance issues we are. And like most of us, it’s their hair that’s the source of the most angst and concern.

So, without further ado, Houston a round of applause for the performers that were brave enough to share not only their recent hair sagas in their own words but provide photographic evidence as well.

The word that comes to mind is "yikes." My hair has grown out so much that all I can do is put it up in a ponytail and hope for the best. I've found cute earrings with a pop of color help to dress it up a bit. I haven't yet cut my bangs, but that may have to happen this weekend. I'm on video calls a lot for my day job (I'm very fortunate to still have one of those) and for those meetings, I've threatened to upgrade my ponytail and start wearing some of the stage wigs I own or simply not turn on my camera. Or, I might use a camera filter to distract from the hot mess on my head. Here’s a photo of one such filter, so you get an idea of what I'm talking about. And I don't even want to talk about my nails... 
JJ Johnson
As we were heading into the isolation, I was already approaching near to haircut time for me. It'd been two months since my last and I usually get a haircut every 8-10 weeks. Then...lockdown happened. So, I last about two weeks in isolation before I reached critical mass. Now, I'm a broke theatre person, so I own all the tools necessary to cut my own hair and usually do it myself a few times a year. I typically wear a pretty normal men's hairstyle. Short and neat on the sides and back, a little longer on top with a right-side part. But two factors were weighed here: one, what can I do to keep from needing to cut my hair for the longest time possible, and two, since I have nobody to see or impress with my hairstyle, what can I do to my head that I wouldn't normally do. The answer was clear: an apocalyptic Mad Max-style mohawk. So, that's what I did. I shaved a mohawk into my hair and I couldn't have been happier. My mother was horrified, but what can you do? It's the apocalypse, after all.

Sammy McManus
I went blonde last year and I’ve grown tired of it, so I figured I’d take the opportunity to have some fun. And I actually used a red dye, because in my head I could then go from red to a darker red to get it to a more ‘normal’ look again (sans blonde). But the red turned pink. And now seemed as good a time as any... this way if it went horribly wrong, I don’t have to go out in public for a while! Plus, my husband is home to help me. The years have taught me that I’m pretty terrible at dying my own hair.

Bangs are the issue for Decker
Photo by Jennifer Decker

Jennifer Decker
I look like Cousin It, because I can't decide whether to keep growing out my bangs or cut them. My husband looks like a Chia Pet. Oh.. and I'm like.. holy crap! If I grow out my bangs, I'm going to need some Botox! How am I going to get any of that right now? I had a traumatic bang cutting experience in my childhood where I made my sister look like she had a brush coming out of her forehead, so I don't know if I should try to cut them. It’s a thing.

Ehrhardt before and after her barely-there bang trim
Photo by Lindsay Ehrhardt
Lindsay Ehrhardt
I don’t do well with change, which keeps me from making any drastic changes to my hair, and we all know the fear of too-short bangs. So, at this point, my trick is to trim them so infinitesimally that it’s like I didn’t trim them at all. 
Skyler Sinclair
I haven’t really done anything interesting to my hair (except not wash it for an ungodly long time) but I’ve been thinking about straightening it and doing a photoshoot! I know, riveting stuff but I haven’t straightened my hair since maybe freshman year of high school. It damages my curly hair but I’m willing to fight boredom anyway I can. It ended up taking a little over an hour to straighten. My arm is gonna be so sore tomorrow. I stepped outside to snap a few pics and it immediately started to curl again!! But it was fun and helped pass the time. It also gave me a little confidence boost after feeling so down the past couple of weeks. 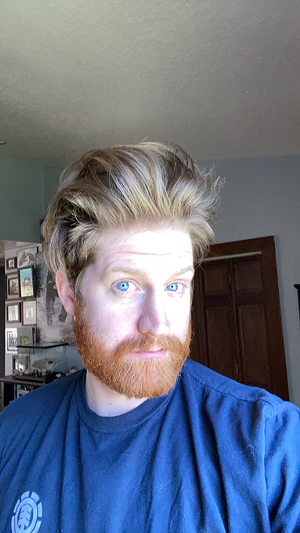 Behold Weir's impressive mane
Photo by Blake Weir
Blake Weir
I’m truly in a DGAF phase right now. I have friends who don’t have much hair so complaining about having SO MUCH hair is a bit...silly, I guess.
I’m trying to maintain my beard. It’s very thick and grows wider faster than longer. I just don’t have a proper trimmer anymore because it broke. There is literally ONE HUMAN I trust with my hair right now and that’s Valery (spelling) from The Boardroom in rice village. She has been cutting my hair for almost 2 years. I come in and tell her what period my show is in and what I need and she nails it on the head every time. She says I’m one of her favorites because she never knows what I’m gonna ask for. I haven’t seen her since the beginning of March. And when I cut it, it was merely a trim because I had an audition coming up - and that was canceled anyway. My hair currently has a mind of its own. My typical hairspray won’t hold it, I don’t own gel. So, I wear a hat or just let it fly Rachael Logue
Oooh girl. I’m just glad I don’t have to see anyone right now. I’m officially in the “awkward growing out” stage. For The Wolves at Syracuse Stage I buzzed the sides of my head and bleached sections of the top so we could die it lavender in a Megan Rapinoe tribute. Now, those lavender streaks are just gray and have grown out to reveal the roots. The buzzed sides are too short to control but long enough to have a mind of their own. So, I would say I fall into the Shaggy Mess category. 
Blake Jackson
I've always been too scared to do anything drastic to my hair without putting it in someone else's hands, so I figured now was as good a time as any to face that fear, and shave and dye my hair myself. I just really like the softness of this shade of pink, and wanted to see that color every time I looked in the mirror. 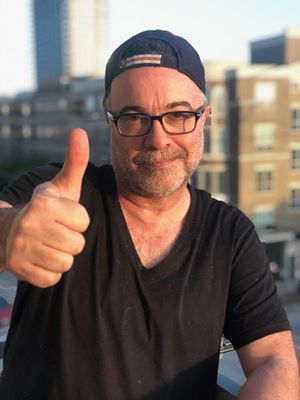 
Jeff Miller
Well, I am a hairy man and prone to shaggy and shaggy looks bit and even I have taken to wearing an Astros ball cap at all times. ALL TIMES. Even for these zoom reading things. Last night I read Bill Fordham from August: Osage County for UH students with it flipped backward like a teenager. Bill Fordham is not someone who wears ball caps.
KEEP THE HOUSTON PRESS FREE... Since we started the Houston Press, it has been defined as the free, independent voice of Houston, and we'd like to keep it that way. With local media under siege, it's more important than ever for us to rally support behind funding our local journalism. You can help by participating in our "I Support" program, allowing us to keep offering readers access to our incisive coverage of local news, food and culture with no paywalls.
Make a one-time donation today for as little as $1.