Houston Ballet All Set to Fly With Peter Pan, Romeo and Juliet and Swan Lake in 2022-23 Season 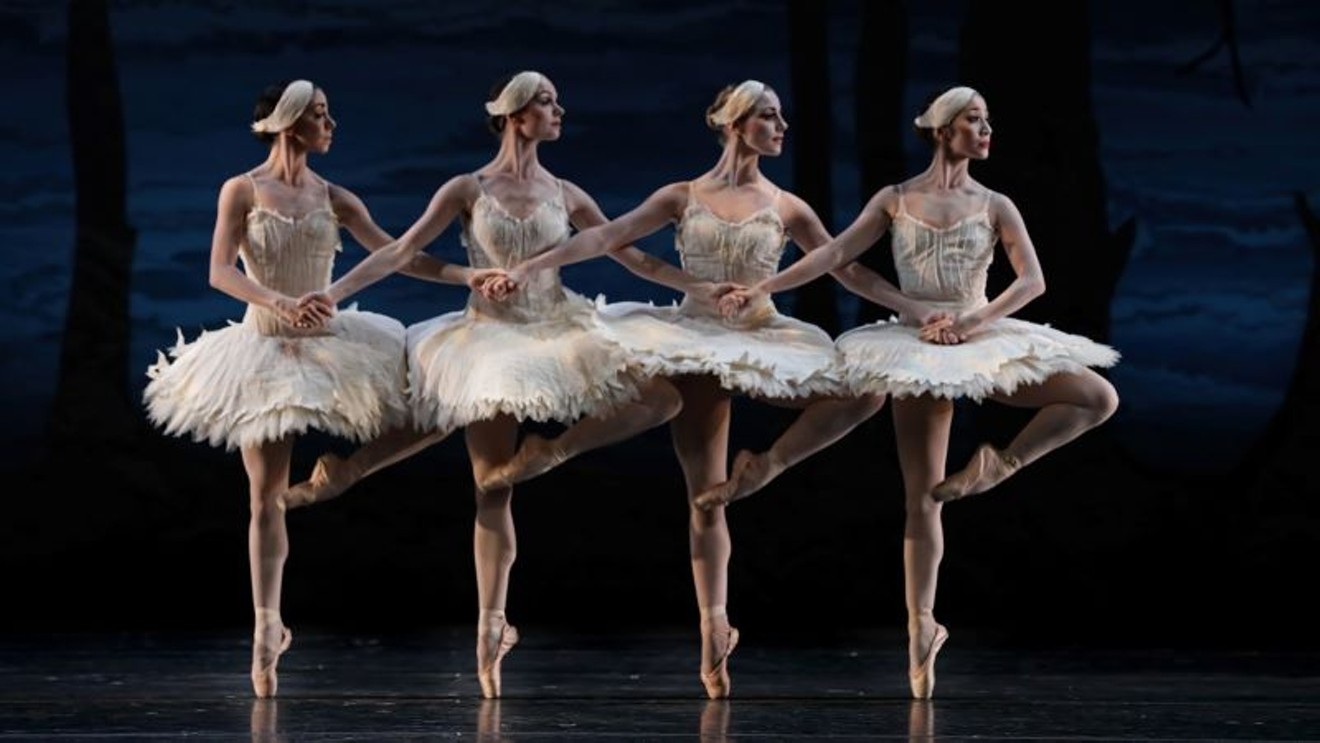 They're back in all their swanlike glory. Photo by Amitava Sarkar (2018), Courtesy of Houston Ballet

The Nutcracker, choreographed by Artistic Director Stanton Welch, will be back at full strength for the winter holiday season and a one-night only performance of the Margaret Alkek Williams Jubilee of Dance will feature a world premiere.

But there's no need to wait until next fall to see Houston Ballet. Continuing through March 20 is Welch's Sylvia. The Academy Spring Showcase takes place April 29 and 30 and gives audiences the chance to see the next generation of rising ballet talent.  Pretty Things running May 20-29 showcases work from some of the best respected choreographers in the world.

Originals planned for June 2-12 shows off a returning original ballet by Welch as well as Principal Dancer Melody Mennite's first full commissioned work for Houston Ballet. And Madame Butterfly, scheduled for June 16-26 and choreographed by Welch, will round out the 2021-22 season.


Based upon the popular children’s story by Sir James M. Barrie, Peter Pan is a captivating performance following Wendy, John, Michael and Peter’s escape to Neverland. Told through the eyes of a child, this interpretation of the children’s classic tale features flying sequences, swashbuckling swordfights, giant puppets and costumes inspired by punk fashion sure to mesmerize audiences of all ages. Experience what Broadway World calls, “a magical ballet produced by a supremely talented dance company.”


Good Vibrations sets the stage with a triple bill full of energy with Red Earth, The Letter V and a long-awaited world premiere by internationally acclaimed choreographer, Arthur Pita. Red Earth celebrates Australian artistry, transporting audiences to a world where adversity is expressed through movement, accompanied by an original score from Peter Sculthorpe and artwork from scenic designer Kevin “Pro” Hart. In The Letter V, created by famously musical choreographer Mark Morris on Houston Ballet in 2015, dancers move to the music of Joseph Haydn’s Symphony No. 88 in G Major. Rounding out the program is Pita’s world premiere, Good Vibrations, originally set to debut in the 2019-2020 season. This work marks the first time Pita has choreographed on Houston Ballet. Set to a commissioned score by Christopher Austin, with references to The Beach Boys’ legendary song, ‘Good Vibrations,’ this program is a whole vibe.

Welch’s Romeo and Juliet weaves the poignant tale of the star-crossed lovers exquisitely with lavish sets and costumes by acclaimed Italian designer Roberta Guidi di Bagno. Premiering at Houston Ballet in 2015, Welch’s brilliantly imagined interpretation of the world’s most famous love story pays tribute to Italian Renaissance with classic themes and fresh choreography danced to Prokofiev’s romantic score. Hailed by Arts and Culture Texas Magazine as “simply breathtaking – as in, it literally inspired wonderfully stunned intakes of breath among the audience,” Welch’s take on this Shakespearean classic gives the story new life.


Showcasing the depth of male talent in the Company, Clear strips down using flesh-toned costumes to focus on the essence of dance and the male body. Featuring seven men and one woman, this balletic production emphasizes the sheer magnitude of emotion in choreography and reveals the power of transparency in movement. George Balanchine’s neoclassical ballet, Concerto Barocco, partners with the music of Johann Sebastian Bach Concerto in D Minor for Two Violins to spotlight the relationship between dance and music. Houston Ballet also presents the world premiere of Cathy Marston’s Summer and Smoke, a co-production with American Ballet Theatre. Based on the Tennessee Williams play of the same name, Houston audiences can experience Marston’s unique literary storytelling for the first time.


For the first time in ten years, Aszure Barton’s Angular Momentum will take the stage at Houston Ballet for a performance that can only be described as an otherworldly experience. Barton plays homage to Houston with influences ranging from Houston architecture depicted in the set design to the moon landing in the third movement of Mason Bates’ hybrid orchestral-electronic score. Divergence, set to L’Arlésienne Suites No. 1 & 2 by Georges Bizet, breaks away from tradition with dazzling choreography and provocative costuming meant to showcase the range of ballet. Debuting to audience and critical acclaim at The Australian Ballet, this work stretches beyond any limitation. Justin Peck, choreographer for Oscar-nominated musical West Side Story and resident choreographer for New York City Ballet, debuts a world premiere work, his second commission for the Company.


With elaborate sets and glittering costumes by the late New Zealand designer Kristian Fredrikson, Swan Lake is the first full-length classical ballet created on Houston Ballet by Stanton Welch. This will be Houston Ballet’s fifth time performing Welch’s Swan Lake as part of its main season. Set to the iconic score of Peter Ilyich Tchaikovsky and inspired by the Pre-Raphaelite painting The Lady of Shalott, this interpretation of Swan Lake follows Odette-Odile as she’s cursed by the evil Rothbart transforming into a swan doomed to never find true love.


The add-on performance for 2022-2023 season programming include:

The ultimate holiday tradition returns with the grandeur audiences expect from Stanton Welch’s The Nutcracker. From snowflakes to sword fights to the Christmas tree that reaches the sky, this ballet is a nostalgic annual tradition and perfect holiday experience for the whole family. Be there as Clara and Drosselmeyer make their journey to the Kingdom of Sweets and meet the Sugar Plum Fairy and her prince in the land where the real magic happens. Welch’s The Nutcracker features hundreds of roles and a myriad of exquisite details that will leave you finding something new in every performance.


Experience the delight of Margaret Alkek Williams Jubilee of Dance in a one-night-only performance Houston Chronicle calls “one of the most fun performances of the season.” This year’s program will spotlight the most exciting moments from Houston Ballet’s repertory featuring every lead dancer and debut a world premiere by Silas Farley, an up-and-coming choreographer who recently choreographed works for The Guggenheim’s Works & Process series, The Washington Ballet and American Ballet Theatre.


For more information, call 713-227-2787 or visit houstonballet.org. Season tickets start at $117.
KEEP THE HOUSTON PRESS FREE... Since we started the Houston Press, it has been defined as the free, independent voice of Houston, and we'd like to keep it that way. With local media under siege, it's more important than ever for us to rally support behind funding our local journalism. You can help by participating in our "I Support" program, allowing us to keep offering readers access to our incisive coverage of local news, food and culture with no paywalls.
Make a one-time donation today for as little as $1.