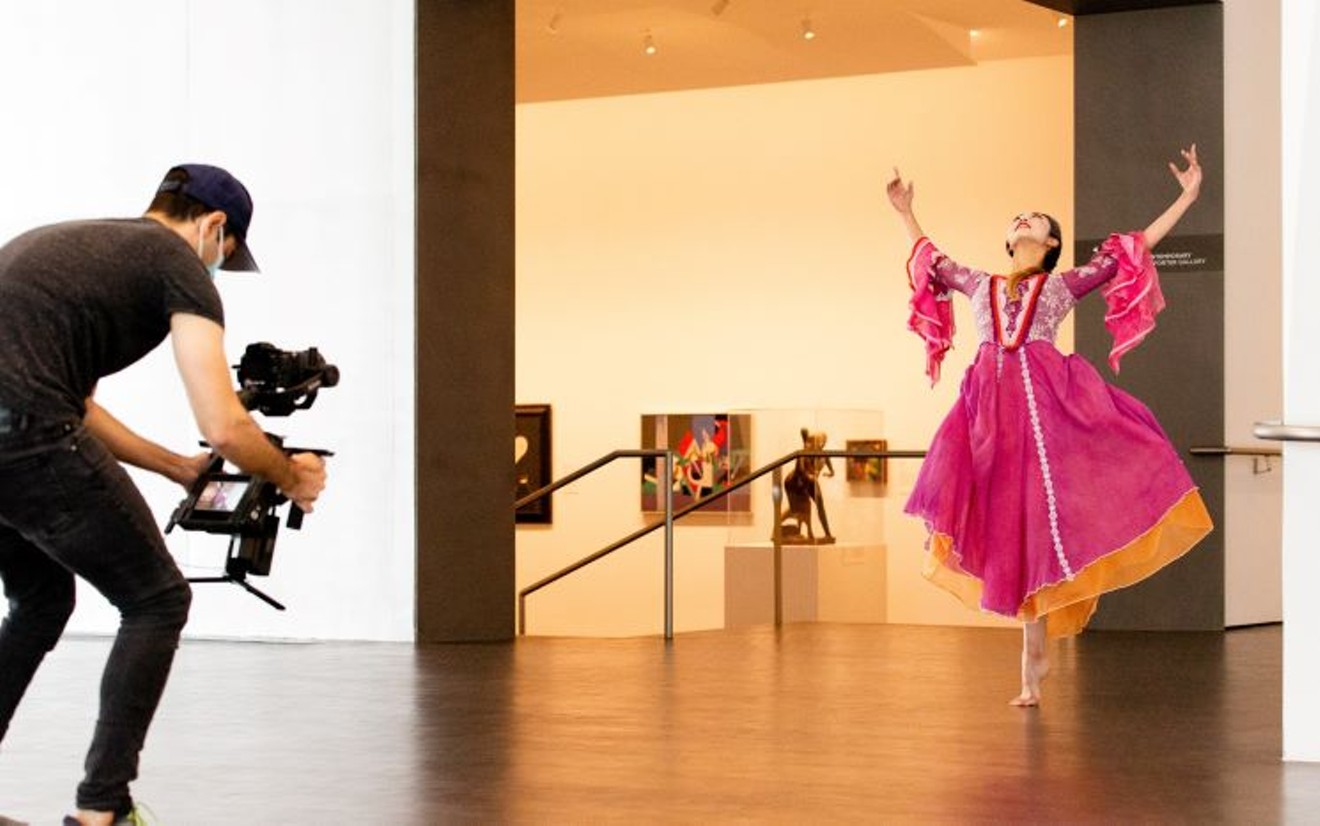 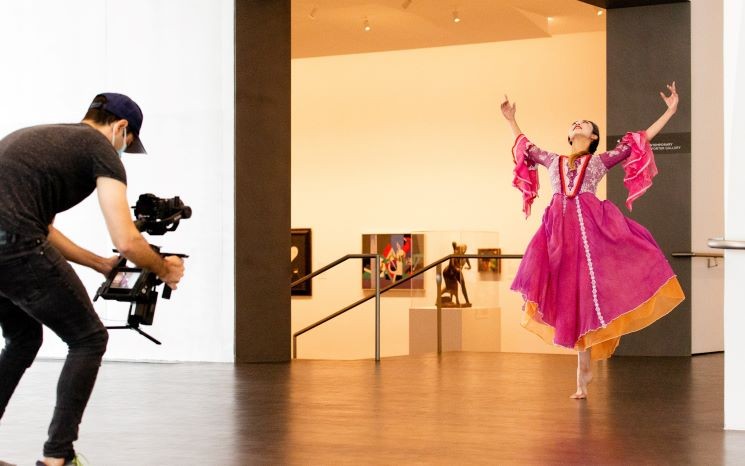 Houston Ballet’s David Rivera and Aoi Fujiwara filming Stanton Welch’s ADROIT: clever or skillful in using the hands or mind.
Photo by Lawrence Elizabeth Knox (2021), Courtesy of Houston Ballet.
Among all the unexpected side effects of the prolonged pandemic, was the swing from live shows to filmed productions for many of the performance groups in Houston.

For David Rivera, Houston Ballet’s Associate Director of Audio and Visual Services, it meant a rather sizeable leap from making in-house and short promotional videos as well as filming full length ballets to filming productions that were streamed out to ballet fans missing their fix. The workload increased exponentially and the learning curve was similarly impressive.

"Normally we're on the stage for all of our season and here and there we'll film some material to use as promotional material or little fun narrative pieces, little interviews. But with the pandemic everyone just switched to video and it wasn't just little pieces dropped into the season, it was the entire season was video content."

Working closely with Houston Ballet's Artistic Director Stanton Welch, Rivera is about to see his work on the Welch's latest choreographed filmed project — ADROIT: clever or skillful in using the hands or mind —  and done in collaboration with the Museum of Fine Arts, Houston, released to the public on Houston Ballet’s social media channels: Facebook, Instagram and YouTube right now.

Rivera says he loves his job which allows him to combine his love of dance — he was a ballet dancer in Houston for more than 20 years — with his early and continuing interest in film and movies. "I really loved capturing movement on film which is really tied into the aesthetic of dance." This interest took him to the University of Houston where he got his degree in media production.

While Rivera called his experience working with the MFAH a very good one and something he'd like to do again, filming there ratcheted up the degree of difficulty factor. Setting the film in the new Nancy and Rich Kinder Building (it opened last November) at MFAH meant dancers and crew had to be very careful not to damage any of that valuable, international artwork, says Rivera. And since they had to be careful not to throw any direct, intense lighting on any of the pictures, Rivera had to come up with some work-arounds to be able to clearly film the performances.

Twenty-eight Houston Ballet dancers take turns as they escort viewers through the museum, welcoming them to the artwork and the building itself, Rivera says. They are accompanied by 21 strings musicians from Houston Ballet Orchestra playing Wolfgang Amadeus Mozart’s “Eine kleine Nachtmusik,” (“A Little Night Music,”) conducted by Ermanno Florio, Music Director and Principal Conductor for Houston Ballet.

Rivera says his biggest challenge was editing the project. That and highlighting each dancer involved in the best way possible for film. "The challenge was in filming each dancer individually, by themselves for over six months and then bringing all those thousands of clips into the edit and whittling it all down." Long uncut takes of the dancers also were wearing after a while, he admits. "It was a challenge physically because I was using this camera rig and the longer you film, the heavier it gets."

He was not present for the rehearsals during which the dancers were all masked. "Stanton would take video clips with his phone of the rehearsal process as he was directing the dancers and he would send those clips to me so that I would have a sense of how they’re moving, how much space they're taking up, where they are moving, what direction.

"So that way I had an idea when we got into the space to do the final shoot of where does the camera need to be in relation to them," he says. "And then of course, when you're there in the space with the dancers, it will always change and evolve. So it was a lot of really quick collaboration in the space with each dancer."

During the months of filming, Rivera says he learned a lot. "I learned so much about myself, creatively and technically, acquiring new skills, working under more constrained timelines." His advice to others plunging into filming of the arts: "A piece of advice you hear a lot is: 'just to do it.' That would be my advice as well. The skill set I have now is what I picked up along the way. It wasn't necessarily what I got in high school or college. The only way you learn is through experience and trying things and allowing yourself room to fail and to learn from it and continue."

While Rivera, as much as anyone, is looking forward to the return of live ballet performances in late September, he thinks this ballet film will appeal to arts history buffs as well as the arts community and ultimately everyone. "It's really age friendly for everyone."