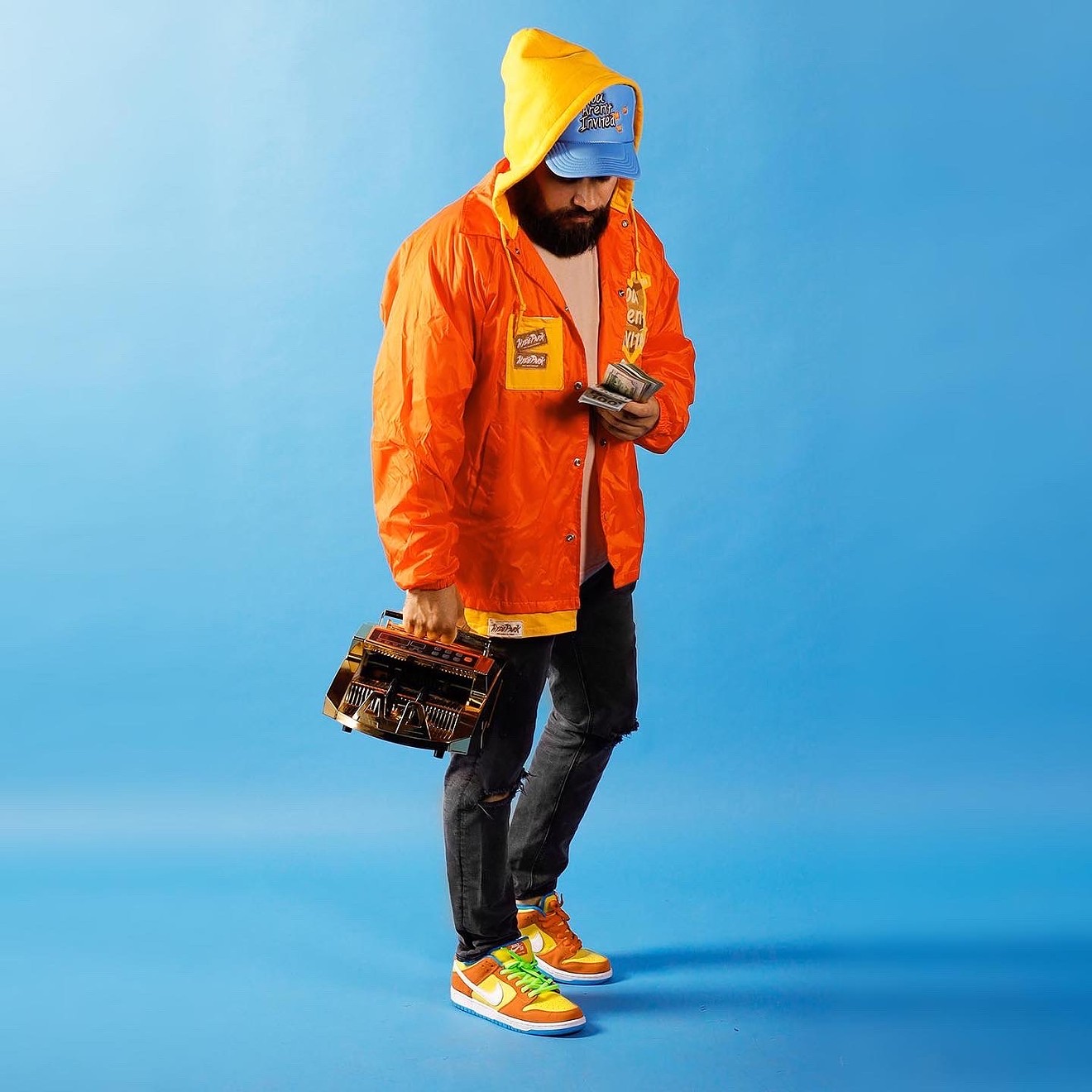 Jacob Joseph dons some of the items from his clothing brand Hyde Park Goods Photo by Wealthy
On an overcast evening last fall, people begin lining up at The Assembly Htx, a boho chic event space nestled on the corner of Berry and St Emanuel in the Third Ward. What started out as a few people milling around the Hungry Heroz food truck idling near the building’s entrance quickly ballooned into a group of at least 60 people. As the line continued to grow, Melissa Sanchez rushed out of her hastily parked car to grab her place in line.

“I missed out the last time but I’m here this time,” she exclaimed as she located her friend already in line.

What she was trying not to miss was the latest drop from Hyde Park Goods, the Houston-based clothing line that is making waves internationally with its distinctive style. Their collection of headwear, shirts, hoodies, an accessory decorated with smiley faces and the phrase “You Aren't Invited” has been seen on actors, social media influencers, rappers, comedians and more since the brand's start in 2018. This includes well known people like Saucy Santana, Glorilla, DC Young Fly, and Sauce Walka but the brand’s creator, Jacob Joseph, is not focused on celebrities.

“I’ve helped out a lot of brands,” he says as he sits down in a chair at Hyde Park’s offices and moves some items off the table in front of him. “I have been the guy listening to other people tell me what they want to do with their clothing brand and I, wanting them to succeed, gave them advice they didn’t want to hear. With Hyde Park Goods I can do what I want to do. I don’t have to worry about what anyone thinks. I can just be creative.”

The need to be creative has always been at the forefront with Joseph, starting out as a graffiti artist in the '90s after witnessing the hip-hop influences coming out of New York and Chicago. His creative output would soon run up against a wall when the graffiti crews he was moving around the city with were classified as gangs by Harris County.

“It was early on, and I was actually being put on gang task force lists for doing graffiti. We can look back now and think it’s ridiculous but that was around the time they started making the activity a federal crime. You could be painting a train and they could shoot you whereas before they couldn’t. You could get a minimum of two years. Real fed time. I was getting pulled over, harassed, locked up, and eventually I just got tired.”

That feeling of being tired led Joseph deeper into graphic design, creating art for companies and people asking for help designing their apparel. As the art space became more digitized because of the ever-increasing technology, Joseph learned more and more about digital design, working as a freelancer in the commercial art space. People would come to him with an idea, and he would quickly hand draw it, scan it, and put it on the computer. This eventually led him to a chance meeting with a woman selling T-shirt printing equipment.
“The equipment was expensive,” recalls Joseph. “But I made her a deal. If she held it for me for a week, I would pay for it in all cash but only if she would train my friends and I on how to use it.”

As he ventured deeper into designing clothing for others his own ideas began to increasingly move toward the forefront. Over a decade working with brands had given him the eye as to what did and didn’t work. Watching the rise of social media apps like Instagram also gave him avenue for marketing.

After creating a few pieces and doing a photo shoot in front of his 1970’s Volkswagen bus, they were contacted by Travis Scott’s team who wanted Joseph to participate in his second annual Astroworld Festival. The event was occurring in a week and didn’t give Joseph a lot of time to put together everything, but it was just enough time for him to produce Hyde Park Goods.

The move propelled Joseph in the direction he was already headed creatively: to start his own brand and stop working for others. He named it Hyde Park so that it would be relatable to people, given that there are Hyde Park streets and neighborhoods found in a lot of major cities. The clothing brand also gave Joseph a chance to be a kid again, getting back to his roots in hip-hop but this time without the lingering threat of jail time. The pandemic lockdowns in 2020 gave him the opportunity to create and strategize exactly what the brand would be and helped develop the brand's mantra.

“I decided I’m not going to do this for likes. I’m not doing this for attention. I’m going to put out a product and sell it how I want to sell it. I’m going to release when I want to release and I’m only releasing when I feel like it's ready. If you don’t like that then go buy it from somebody else. As a matter of fact, you aren't  invited.”

The brand, experimenting with various colorways and releasing with surprise drops, began to gain popularity. As the brand grew, Joseph working with his head of public relations, Kevin Scott, better known as Happy Bootz, didn’t focus on just getting their clothes on the latest influencer. They moved in the opposite direction, making sure that people that really supported the brand got the product instead of ending up in a celebrity’s storage closet.

“At first we kind of ignored the dm’s,” remembers Scott about the initial launch of the brand when people would contact them on Instagram trying to get ahold of limited product. “Once it started piling up, blue check mark or not, we would just respond with You Aren't Invited. Not having access to the clothes created even more of a demand. There are ways to get the product but if you want it, you just have to figure it out.”

One of the ways was that pop up back on the overcast day in October. Private events are announced at any moment and supporters of the brand show up to buy exclusive items. When Hyde Park Goods did a release based on a cereal theme Scott invited a select group of influencers to come out and do a photo shoot dubbed “Smiley Puffs” with product that would only be available to them. Another drop had the brand selling exclusive merchandise to people in the know in a Simpson’s Kwik-E-Mar themed local renamed the “Drip-E-Mart”.

It's not just about marketing. As Scott walks through the Hyde Park Goods warehouse and speaks with the employees creating product there is a heavy focus on quality. It the corner, behind all the workers, is a box of shirts that didn't meet the brand's quality control standards and were marked for disposal.  Scott, inspecting them and setting them aside, turns his attention to a beanie being sewn on the machine in front of him. 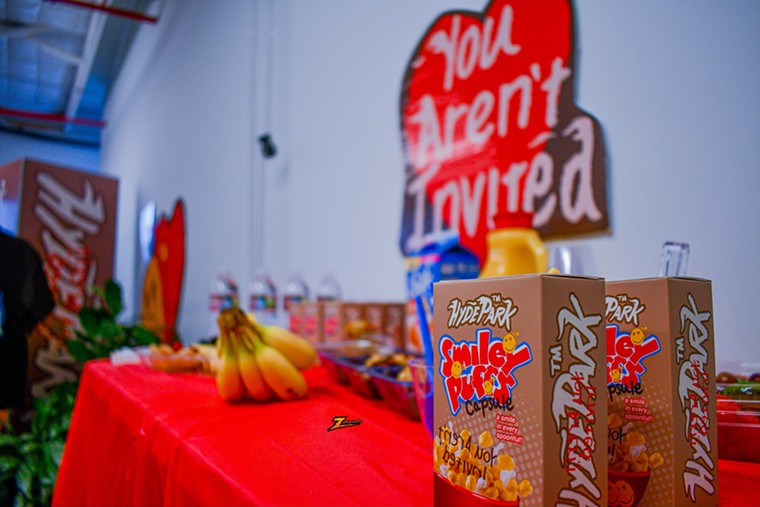 One of the capsule drops by the brand with a cereal theme.
Photo by Hyde Park Goods
“We know there will be copycats,” he laughs as one of the women sewing puts the finishing touches on a beanie and hands it to him. “There is always something in each drop that shows authenticity. A tag, a lining, some embroidery. We’re always thinking about something to separate us from everybody else.”

That separation is working, as Hyde Park Goods begins to show up more in pop culture and fashion. Sauce Walka has touted the brand as “the next big thing” and “Houston’s own Bape.” The brand’s capsule pop ups are happening more frequently in cities like Houston, Dallas, Austin and Los Angeles. More artists like Tyler Lepley, Jeezy, Propain and OG3Three continue to increase the brand's visibility and helped it expand into over 70 stores worldwide.

For Joseph, the most important thing is that the brand remains true to its foundation. There is more in store for Hyde Park Goods and more that he wants to do creatively with other brands, but for now, he is enjoying the freedom that has come with his creativity. As he sits in a swivel chair in his shared office at Hyde Park, which has now grown from a thought in his head to a full-fledged business run by himself, his director of operations, Angela Shen, and Happy Bootz, he's able to fully articulate what the brand means to him.

“This brand was never about making money. It was about making a statement and standing for something. It’s about building a foundation and creating new business opportunities. We’re going to move in our own lane and not be tempted with distractions.”

If you don’t like that You Aren't Invited.
KEEP THE HOUSTON PRESS FREE... Since we started the Houston Press, it has been defined as the free, independent voice of Houston, and we'd like to keep it that way. With local media under siege, it's more important than ever for us to rally support behind funding our local journalism. You can help by participating in our "I Support" program, allowing us to keep offering readers access to our incisive coverage of local news, food and culture with no paywalls.
Make a one-time donation today for as little as $1.