Last October La traviata was the scene of Eun Sun Kim's conducting debut with the Houston Grand Opera. Photo by Robert Kusel
Patrick Summers, the artistic and music director of Houston Grand Opera was making a lot of trips to Vienna around 2014 when he came across the Korean conductor Eun Sun Kim and was entranced by her talent.

Now, HGO is announcing that Kim will be their principal guest conductor starting in the 2019-20 season, the first person in this position since 1993. She has agreed that for the next four seasons, she'll conduct one of HGO's operas each season, starting with R. Strauss's Salome.

Kim has been highly celebrated in Europe but it is still a bold move on the part of HGO to bring in a female Asian conductor to an art form dominated by white males in the conducting role. But this move continues an HGO tradition, Summers says. "HGO has long been a place that recognizes talent early and cultivated it. As artistic director I want to continue that tradition."

"I wanted to have a musical partner at the top of the organization particularly since I became artistic director and the job got much larger. Also I’ve been at HGO for a long time and the fresh ideas and fresh musical infusion of energy is important to the company and by far the biggest reason, however, is that Eun Sun Kim impressed me so much because she's an extraordinarily gifted conductor," Summers said in an interview.

Summers expects this will mean that he'll probably be doing one less opera on the main stage during each season. As artistic and music director he will select the operas he wants to conduct and then offer Kim the remainder to choose from, he said. Her choice will also depend in part on timing, since she has a busy conducting schedule already, he said. 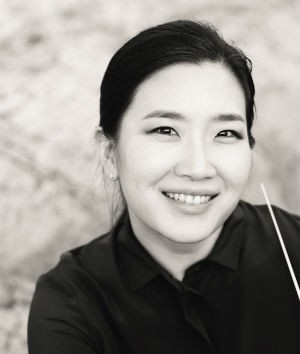 
"I Invited her immediately to conduct La traviata, of course long before we knew we were having a hurricane," Summers said. "When we knew we were not going to be in the Wortham and that we were going to build the Resilience Theater, I immediately called Eun Sun and I said you have to understand the orchestra is going to have to be behind the stage. I'm really sorry about this. It's your U.S. debut not only with Houston Grand Opera but in the United States but this is beyond our control.

"She did not even blink [saying] 'I’m committed to this. The company is keeping the season going and you can count on me to do everything I can.' That kind of artistic spirit is just so inspiring and that she hung in there with us in our opening piece at the Resilience Theater when some people might have been scared out of that and she wasn't. I thought this is a person of extraordinary fortitude."

Communication won't be a problem since Kim is fluent in Italian, German , French and English besides Korean, Summers said. She studied composition and conducting in Seoul and later in Stuttgart. She has conducted at the Berlin State Opera, the Bavarian State Opera in Munich, the Frankfurt Opera and the Royal Opera Stockholm among others.

She was the first woman to lead the Cincinnati May Festival in its 145-year history in February of this year when she replaced the now disgraced James Levine of the New York Met in a guest conducting role.

"I'm thrilled to join the HGO as principal guest conductor," said Eun Sun Kim in a press release. "Opera is by its very nature dramatic, but I'll never forget my debut, conducting La traviata in the [George R. Brown] Convention Center after the big flood last fall. Despite the extraordinary circumstances, it was impressive how the HGO was able to create an environment where the orchestra and chorus and soloists were able to still perform at the highest level. To join such a team is an honor and a pleasure.”

Kim's debut in the United States mirrors his own, Summers said.  "La traviata was the opera of my own debut in 1999 and I loved the symmetry of that. Eun Sun Kim seems to me a limitless talent at the outset of an important career. I am just so thrilled that this is happening."
KEEP THE HOUSTON PRESS FREE... Since we started the Houston Press, it has been defined as the free, independent voice of Houston, and we'd like to keep it that way. With local media under siege, it's more important than ever for us to rally support behind funding our local journalism. You can help by participating in our "I Support" program, allowing us to keep offering readers access to our incisive coverage of local news, food and culture with no paywalls.
Make a one-time donation today for as little as $1.