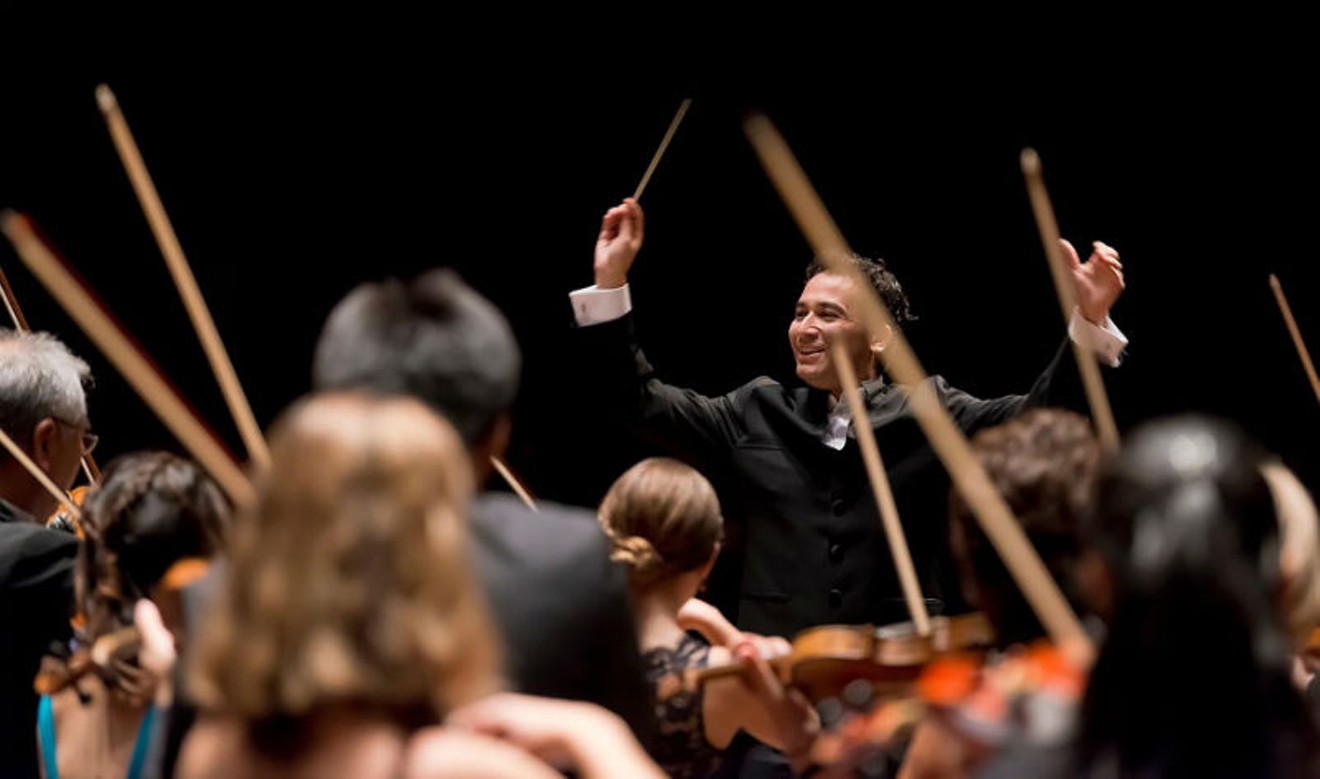 Music Director Andrés Orozco-Estrada has some excitement going on. Photo courtesy of the Houston Symphony
When music-struck parents envision their lessons-taking children as one day soaring to great heights playing the violin, surely Joshua Bell and Itzhak Perlman play prominent roles in those dreams.

Fortunately for us all, the Houston Symphony has signed both on for appearances in its 2018-19 season, which is being announced today. In a jam-packed season exploring works both old and new, classical and bluesy, the symphony will also present a world premiere, a continuation of work by America's Charles Ives, and Harry Potter because you know, why not?

Soprano Nicole Heaston, long a Houston favorite in opera and classic music circles and mezzo-soprano Kelly O'Connor, a Grammy award winner, will be part of Mahler's Symphony No. 2, Resurrection — along with 250 musicians.

This marks Music Director Andrés Orozco-Estrada's fifth year in this position and he spoke to its eclectic nature in a statement in the symphony's press release.

“I’m proud and look forward to sharing the stage with the incredible members of our orchestra and sharing these wonderful musical experiences and our bold sound with our city,” said Orozco-Estrada. “The classical series features some of the world’s greatest conductors and soloists, as well as powerful masterworks, new works and lesser-known music. This is going to be a wonderful season; full of energy, passion and great music. I encourage everyone to give themselves the opportunity to come and discover a complete new universe.”

The lineup with descriptors from the Houston Symphony:

SYMPHONY SUMMER SPECIAL
The Music of George Michael
Saturday, JULY 14, 7:30 p.m.
Brent Havens, conductor
Relive all your favorite George Michael hits when the Houston Symphony pays tribute to an artist who was gone too soon. From “Faith” and “Careless Whisper” to “One More Try” and “Wake Me Up Before You Go-Go,” you’ll be singing along in your seat.

SYMPHONY SUMMER SPECIAL
WORLD PREMIERE
Apollo 13—Film with Live Orchestra
Saturday, JULY 21, 7:30 p.m.
Steven Reineke, conductor
Houston Symphony Chorus
Betsy Cook Weber, director
Get ready, Space City! The world premiere performance of Apollo 13 with live soundtrack fittingly takes place right here in Houston as the complete film starring Tom Hanks, Kevin Bacon and Bill Paxton is projected on the big screen at Jones Hall, with James Horner’s Oscar®-nominated score performed live by the Houston Symphony. Relive the incredible story of one of the most thrilling and suspenseful space missions in history like never before in what promises to be an emotional and truly unforgettable concert event.

CLASSICAL SERIES
Dvo?ák’s Stabat Mater
Thursday, SEPTEMBER 27, 8 p.m.
Saturday, SEPTEMBER 29, 8 p.m.
Sunday, SEPTEMBER 30, 2:30 p.m.
Andrés Orozco-Estrada, conductor
Houston Symphony Chorus
Betsy Cook Weber, director
DVO?ÁK Stabat Mater
A stunning creative outpouring that arose from the tragic death of his young children, Dvo?ák’s Stabat Mater stands as one of the towering monuments of choral music, a soul-stirring meditation on grief and hope. Be there as Andrés leads the Houston Symphony, Chorus and soloists in this sublime and moving masterpiece, full of tender, luminous beauty that shines forth like a light in darkness.

POPS SERIES
The Music of ABBA
Friday, OCTOBER 5, 8 p.m.
Saturday, OCTOBER 6, 8 p.m.
Sunday, OCTOBER 7, 7:30 p.m.
Steven Reineke, conductor
Rajaton, vocal ensemble
Dance, jive and have the time of your life as international vocal phenomenon Rajaton and the Houston Symphony bring you the greatest hits from ABBA’s incredible catalog. You know them, you love them: “Dancing Queen,” “Mamma Mia,” “S.O.S.” and so many more.

FAMILY SERIES
Peter and the Wolf
Saturday, OCTOBER 6, 10 a.m. and 11:30 a.m.
Robert Franz, conductor
Experience one of the most beloved children’s tales of all time in Prokofiev’s enchanting Peter and the Wolf, in which the courageous Peter and his animal friends outwit the fearsome Wolf. Plus, “Be Prepared” with your mightiest lion’s roar as the Houston Symphony plays popular songs from Disney’s The Lion King—“Hakuna Matata,” “The Circle of Life” and more!

CLASSICAL SERIES
Perlman Plays & Conducts
Thursday, OCTOBER 18, 8 p.m.
Saturday, OCTOBER 20, 8 p.m.
Sunday, OCTOBER 21, 2:30 p.m.
Itzhak Perlman, conductor and violin
BACH Violin Concerto in A Minor
MOZART Symphony No. 40
SCHUMANN Symphony No. 4
It doesn’t get any more must-see than this. Legendary violinist Itzhak Perlman is your conductor and soloist in a program of musical delights, including Bach’s crowd-pleasing concerto and Schumann’s rhythmic and rustic Fourth Symphony. To top it off, hear one of the most beloved symphonies ever composed in Mozart’s ingenious Symphony No. 40.
Margaret Alkek Williams, Underwriter

POPS SERIES
An American in Paris—Film with Live Orchestra
FRIDAY, NOVEMBER 9, 8 p.m.
Saturday, NOVEMBER 10, 8 p.m.
Sunday, NOVEMBER 11, 7:30 p.m.
Constantine Kitsopoulos, conductor
S’Wonderful! Fall in love with the beauty of Paris and the magic of Gershwin’s music as this 1951 classic film starring Gene Kelly and Leslie Caron comes to the big screen at Jones Hall, with live soundtrack by the Houston Symphony.

CLASSICAL SERIES
A Mozart & Brahms Thanksgiving
Friday, NOVEMBER 23, 8 p.m.
Saturday, NOVEMBER 24, 8 p.m.
Sunday, NOVEMBER 25, 2:30 p.m.
David Danzmayr, conductor
Inon Barnatan, piano
SUPPÉ Overture to The Beautiful Galatea
MOZART Piano Concerto No. 22
BRAHMS Symphony No. 4
How glorious it is to behold pure genius at its prime in Mozart’s late, great Piano Concerto No. 22, written during an astoundingly prolific stretch in which the music poured forth as if fully formed. Then, peer through a dazzling kaleidoscope of color with Brahms’ radiant final symphony. It’s a program of musical delights, this Thanksgiving with the Houston Symphony.

FAMILY SERIES
A Polar Express Christmas
Saturday, DECEMBER 8, 10 a.m. and 11:30 a.m.
Robert Franz, conductor
All aboard! Find your compartment and get ready for a magical journey to the North Pole on The Polar Express. Featuring the original storybook images projected on the big screen, this timeless tale of a boy who believes will have your young ones waiting for the sound of Santa’s sleigh! Plus, enjoy festive favorites like “Frosty the Snowman” and “Let it Snow” and lift your voices in a holiday sing-along.

CLASSICAL SERIES
Ravel’s La valse
Thursday, JANUARY 24, 8 p.m.
Saturday, JANUARY 26, 8 p.m.
Sunday, JANUARY 27, 2:30 p.m.
Andrés Orozco-Estrada, conductor
Baiba Skride, violin
IVES Symphony No. 4, Fugue
KORNGOLD Violin Concerto
STRAVINSKY Symphony in Three Movements
RAVEL La valse
Filled with radiant warmth and dazzling flights into the stratosphere, Korngold’s Violin Concerto is one of the most treasured in the repertoire. In the hands of Latvian star Baiba Skride, “a passionate, heart-on-sleeve player” (The Guardian), it promises to be nothing short of extraordinary. This dynamic program ends with Ravel’s fiery showstopper, a hair-raising whirlwind that evokes old-world elegance waltzing on the brink of oblivion.

FAMILY SERIES
Wild, Wild West
Saturday, FEBRUARY 16, 10 a.m. and 11:30 a.m.
Robert Franz, conductor
Grab your spurs and trusty steed, lil’ pardners—we’re gallopin’ back to the days of covered wagons and Wild West adventure! Do a do-si-do through Copland’s “Hoedown” and hold tight to the reins for Rossini’s William Tell Overture. Plus, hear fun favorites from Toy Story 2, Oklahoma! and more, and encounter a few special surprises on the western frontier. Yee Haw!

FAMILY SERIES
Once Upon a Time
Saturday, APRIL 27, 10 a.m. and 11:30 a.m.
Robert Franz, conductor
Wave your magic wand and enter an enchanted land of glass slippers, mysterious witches and fairy godmothers as your favorite fairy tales come to life through music and dance! Ballet dancers will dazzle the senses as the Houston Symphony performs the treasured music from Tchaikovsky’s Sleeping Beauty, Prokofiev’s Cinderella, Stravinsky’s Firebird and more.