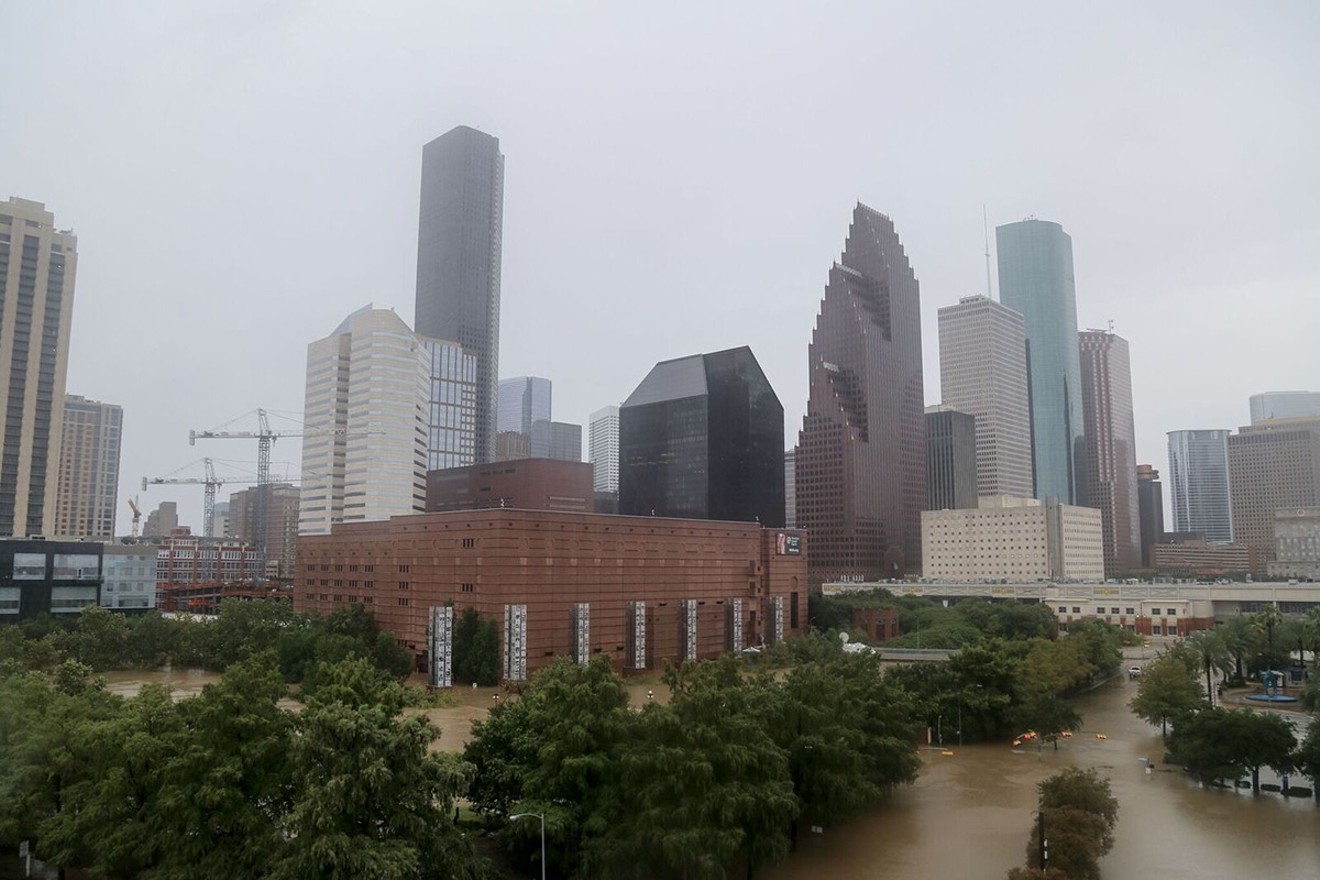 The Wortham Theater Center (left) as seen Sunday morning Photo by Justin Nava
In a scene that is sure to draw even more comparisons to Tropical Storm Allison in 2001, the Houston Theater District has once again sustained a hit from ongoing flooding, this time thanks to now-Tropical Storm Harvey. After a day of walkthroughs in each of the five Theater District venues, Theater District Houston CEO Kathryn McNiel and board chair Perryn Leech outlined the damage in a report Monday afternoon.

They found that low levels of water penetrated the front of house areas in the Wortham Theater Center (which has since receded, leaving behind dirt) as well as the Brown Theater stage, the surface of which shows damage. The Cullen Theater stage shows a little water damage and a low level of water lining the dressing-room corridor. The Wortham basement is completely flooded.

Houston Grand Opera, which calls the Wortham’s two theaters home, noted in a press release that instruments and costumes, including for their upcoming productions of La traviata and Julius Caesar, were moved to high ground prior to the storm and are safe.

The basement of the Wortham is totally flooded, a report from the Houston Theater District said Monday.
Photo by Justin Nava
There is no discernable water damage to the stage or auditorium in Jones Hall, but the basement showed significant water damage and still has standing water. After Allison, the venue sustained significant damage to office spaces and rehearsal halls, with the Houston Symphony estimating losses at approximately $6 million. "Ella at 100," the Ella Fitzgerald tribute that was scheduled to open the Houston Symphony's 2017-18 POPS season, has been canceled.

Some water penetrated The Hobby Center for the Performing Arts’ Zilkha Hall through the foyer’s loading dock area.

Within the Alley, which underwent a $46.5 million building renovation during 2014 and '15, both the Neuhaus Theatre and Mitchell Lobby have been filled with water, as have the basement dressing rooms, with levels rising past the high water mark set by Allison. The electrical systems for both theaters, Neuhaus and Hubbard, are currently underwater (they were both broken in 2001), but the Hubbard Theatre and the Long Lobby sustained no damage.

In light of the assessment, the Alley has announced that all remaining performances of Alfred Hitchcock's The 39 Steps have been canceled.

Houston Ballet headquarters on the left; Wortham on the right
Photo by Justin Nava
Only days ago, Alley Theatre managing director Dean Gladden spoke to KHOU about the effects Tropical Storm Allison had on the building in 2001, when water from nearby Buffalo Bayou washed through the city’s underground tunnels and into the theater, damaging the costumes department, props department, rehearsal halls and Neuhaus stage. Since then, everything has been moved above their parking garage, leaving only a yellow stripe painted across the wall of the Alley’s basement as a reminder of the high-water mark.

Aside from the venues, all the Theater District parking garages are currently full of floodwater and have been deemed completely unusable.

In September 2001, three months after Allison, the Houston Chronicle reported that the 250 million gallons of floodwater that poured through the garages and tunnels resulted in damage to Jones Hall, the Wortham and the multilevel parking garages (all city-owned) of over $27 million, $7 million worth of structural damage to the Alley, and the arts organizations combined losing more than $12 million.

It could be days or even months before Harvey's effects on the nexus of Houston's performing-arts community are fully known.