Rainbow Flag Flies High Over Another Month of Pride Festivities 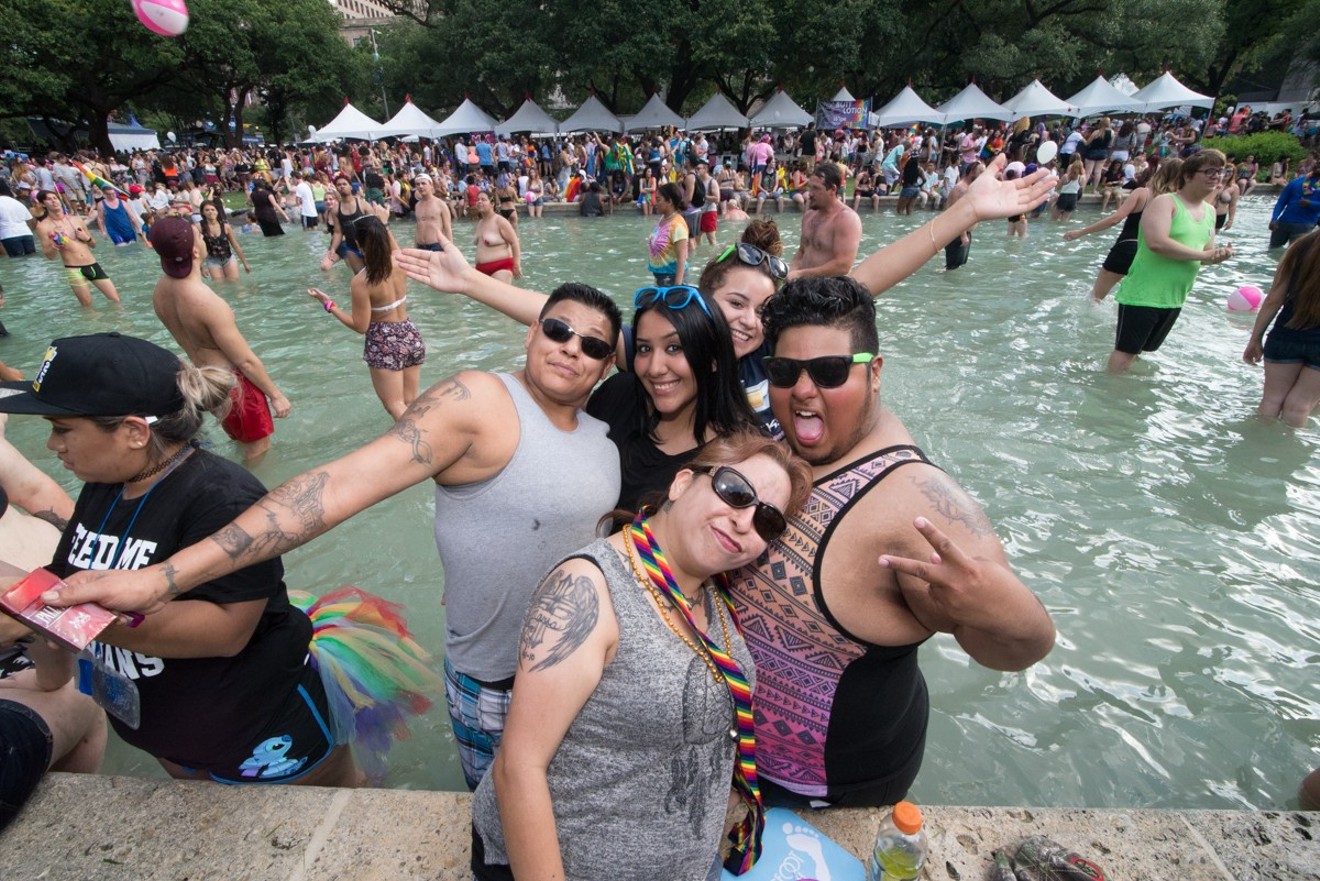 Festivalgoers enjoy a dip in City Hall's reflecting pool during Pride Houston 2016. Photo by Jack Gorman
The rainbow flag will fly high this month for the annual Pride Festival and Pride Parade in downtown Houston. The party goes from noon to 11 p.m. on Saturday, June 24, and will have the typical barely-dressed boys, glitter-covered girls, and a heaping serving of entertainment for all.

If past numbers ring true, more than 500,000 people will swarm to celebrate. The afternoon’s festival will be an entertaining playground located at McKinney and Smith streets, culminating with a headline performance by country-pop singer LeAnn Rimes.

For those who have never been and want to know what to expect, it's a circus of people, parties, and proud Houstonians. Just take a look at the smorgasbord of visuals from previous years' Pride celebrations.

Then there’s the parade itself, which begins at Smith and Lamar, continues on Smith to Walker and finishes at the intersection of Milam and Jefferson. It will be led by Male Grand Marshal Lou Weaver, Female Grand Marshal Sallie Wyatt-Woodall and Ally Grand Marshal Aimee Broadhurst along with Honorary Grand Marshals Tony Carol Smith, Marion Coleman and Arden Eversmeyer.

Weaver is a queer transgender man and a leader in Houston’s LGBTQ community. He is the first Transgender Programs Coordinator for Equality Texas, working on elevating the voices of transgender Texans, including the Texas TransVisible Project, a first-of-its-kind public education campaign.

Wyatt-Woodall joined royal history as she is married to last year's grand marshal, Carol Wyatt-Woodall. Together, they have hosted an annual holiday charity party that has raised more than $60,000 for a variety of LGBTQ organizations.

General admission is free for the festivities, but for people who want the VIP experience, tickets range between $155 to $200. The experience includes admission to the Parade VIP area, a pre-parade reception, music by DJ Joe Ross and grandstand seating for the parade. It will also include an open bar and private, air-conditioned restrooms. Anyone who has attended Pride Parades of yore can attest these two amenities will more than make up for the price of the tickets. As a special perk, local female impersonator Violet S'Arbleu will entertain the VIP section with her flawless looks and cerebral form of art as she pays her own tribute to this year's theme of Wonderland.

Violet S'Arbleu, the current reigning Miss Gay Galveston America 2017, will bring her unique brand of drag and female illusions to this years Pride Parade VIP section.
Steven Tilotta
For partygoers who like to burn the candle all night long, be sure to make it to Rich’s for the official afterparty, Beyond Wonderland, at 2401 San Jacinto.

The Pride Parade has been a part of Houston summers for 39 years, but it most recently made headlines when its organizers decided to move it out of Montrose and into downtown. That move caused quite the ruckus a few years ago, but people seem to have gotten used to the idea.

S'Arbleu, also known as Jacob Chaput, has worked the VIP section for two years now, and he also lives in the heart of Montrose where the parade used to be located. He's seen both the past and the present of the changes that have occurred.

"I know there are pros and cons to both [locations]. Having it downtown allows it be a larger event with more parking, but of course, having it in Montrose supports the businesses immediately around it," he says. "Downtown seems nicely organized. While it would be nice to have it located in the gay area, it’s more accessible in the downtown location."

The organizers of the parade have pointed out a significant historical reason why the downtown location makes sense.

In an email to participants, a Pride Houston representative said, "The 2017 Houston LGBT Pride Celebration will again be held in Downtown Houston continuing the legacy that began on the steps of City Hall in 1977 with the protest against Anita Bryant which is widely considered Houston's 'Stonewall Movement.'"

facebook.com/pridehouston
The Pride Festival and Pride Parade are only one stitch in the fabric of queer existence. Since this point in time last year, it’s been an up-and-down experience for members of the LGBTQ community. For starters, we are just coming off the one-year anniversary of the shooting at popular Orlando gay dance club PULSE, one of the deadliest domestic attacks in American history.

By act of omission, this year President Donald Trump failed to recognize June as LGBTQ Pride Month, and our local legislatures have been giving laser-beam focus to passing the odious Senate Bill 6, otherwise known as Texas' latest "Bathroom Bill." Some people argue the bill is necessary to protect young girls from sexual predators, but others feel that it wrongly affects transgender citizens. The Texas Legislature also passed a bill that would allow adoption agencies to turn away potential parents based on religious beliefs – meaning they can halt LGBTQ parents from adopting if they so choose.

And let’s not even talk about the lackluster season of everyone’s favorite show, RuPaul’s Drag Race. Mama Ru may have revved her engine, but the production never quite found its footing on the gas peddle and instead puttered to a slow, uncomfortable stop.

Though the state and the country may be divided politically and socially, Houston stands strong as a city that embraces all types.

The spirit of pride has a renewed hope in H-town. Among many successes this year is The Montrose Center capital campaign for There’s No Place Like Home – a retirement home that will cater to the unique needs of LGBTQ seniors. Discovery Green has become a gathering spot with its events like Rainbow On The Green, Rainbow and Roll, and Rainbow on Ice.  This year’s Rainbow On The Green takes place June 23 from 7 p.m. to 10 p.m., and it features entertainers like Crawford Nation, Angelina DM Trailz, DJ Astra, Colonial Blue’s Stephanie Rice from Season 12 of The Voice, and the one-and-only R&B/dance-music diva CeCe Peniston.

Barry Mandel, President and Park Director of Discovery Green, explains why these Rainbow events and Pride Parades are so important to Houston.

Blake Jackson in Obsidian Theater's Hedwig and the Angry Inch
Photo courtesy of Obsidian Theater
To see how mainstream the LGBTQ community has become, look no further than Houston's arts community.

Theatre Under The Stars just finished its run of Fun Home – a coming-of-age story about a lesbian who is learning about herself and her complex relationship with her father. Obsidian Theatre and Standing Room Only Productions have teamed up this month to present Hedwig and the Angry Inch, a glam-rock musical about a transgender singer whose sex-change operation got botched. Hedwig has received glowing reviews so far. The Gay Men’s Chorus of Houston is also joining in the fun with their Broadway, Boys and Boas concert on June 16 that will serve as a trip down memory lane of all the fabulous music from the Great White Way.

Houston’s drag game has never been stronger, either. South Beach is running its weekly So You Think You Can Drag competition on Friday nights, and Rich’s Houston has Dessie's Drag Race on Monday nights. Both competitions feature the up-and-coming talents of Houston's drag queens. You can also check out regular shows with veteran drag performers at Hamburger Mary’s, JR’s Bar and Grill, F Bar, Tony’s Corner Pocket, TC’s and Bayou City, among other hot spots in town.

All the way from the Stonewall riot to now, the path to equality has been paved by the brave men and women – both straight as well as LGBTQ – who have stood up and demanded fairness and respect. The Pride Festival and Pride Parade are demonstrable actions that show we care about all walks of life.

And for some, Pride isn't just a one-day-a-year event, but a daily lifestyle.

"For me, pride is being proud of who you are and what you do 365 days a year," Chaput says. "It’s just a part of who I am. I think people in history who we look up to...from Stonewall to Harvey Milk...they lived their truth every day."