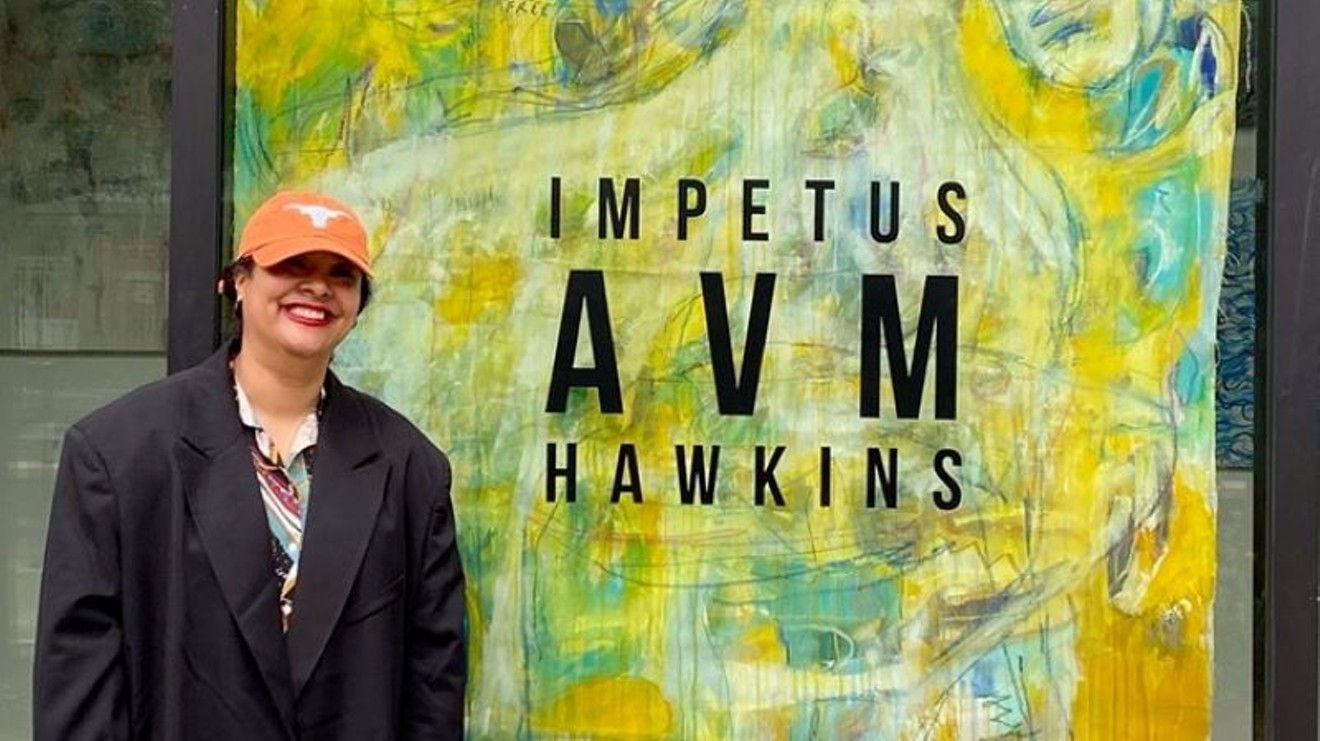 Hawkins first solo show is being held at Mid Main Lofts downtown. Photo by Laurie Mills
The sun is just setting over Mid Main Lofts downtown and the lights of the bars, restaurants, and businesses begin turning on up and down Main Street. The METROrail periodically whizzes by as people walk up and down  stopping in and out of the shops and theaters.

Waiting on the train, patrons can look across the street, through Mid Main Loft’s windows into an open space inside the building. People inside mill around the Mid Main Gallery, munching on appetizers and gazing at the art displayed on the wall. Walking among them is AVM Hawkins. She stops briefly to fix a table setting before being beckoned by one of the people pointing at a large blue and white abstract portrait hanging on the wall. As she walks toward them, she passes a large sign with the word “Impetus” in bold lettering.

“Impetus was the perfect word for this,” describes Hawkins as she gives a tour of the art gallery. “For me it was ironic, symbolic, and serendipitous to me. I’m five months pregnant. Two and a half years ago I put my all into being an artist. It became my purpose in life and I think about that as I prepare to bring into the world another life with his or her own purpose.” Impetus, a gallery show by AVM Hawkins, runs through April 7th during the 10 year anniversary for Mid Main.
Photo by AVM Hawkins
Impetus is the force that makes something happen or happen more quickly. Art is the force that made things move in Hawkin’s life. Two years ago, Hawkins was practicing law and started to dabble a little more into an artistic hobby she had been working on in law school. Using abstract art to help alleviate the pressures of studying and tests, Hawkins continued to practice after passing the bar. The feeling to create gradually began to overtake her and eventually she began to look at ways to expand her hobby. Joining a business and art mentorship program led her along the path that would eventually turn Hawkin’s hobby into a full-fledged career.

“I didn’t want to live with regret,” she says in between speaking with patrons perusing her work on the walls of the gallery. “I didn’t want to think that I could have pursued art but now I can’t because my professional life took me in a different direction. I want my child to look at this and know that they inspired me as much as I hope to inspire them.” The show is a collection of Hawkins abstract work.
Photo by AVM Hawkins
Impetusis a collection of abstract works based on the idea that Hawkins does not just create but has a need to create. The show is a part of the 10-year celebration of Mid Main, which highlights local business in the area like record shop Sig’s Lagoon. The anniversary champions local artisans, makers, farmers, and more.

After stepping away from practicing law in 2019 and going fully into the art world, Hawkins shows off her  different artistic styles, use of color, and texture through various forms of mixed media. Switching career paths right before the pandemic, going from the professional world of practicing law into living off your art, is a daunting task for anyone, but Hawkins is determinedly moving forward.

“I gave myself a year to move into the position of being a full time creative. I cannot help but look back and see that not only am I pursuing my dream, I am now living it.”

Impetus is running now through April 7 at Mid Main Gallery, 3550 Main.
KEEP THE HOUSTON PRESS FREE... Since we started the Houston Press, it has been defined as the free, independent voice of Houston, and we'd like to keep it that way. With local media under siege, it's more important than ever for us to rally support behind funding our local journalism. You can help by participating in our "I Support" program, allowing us to keep offering readers access to our incisive coverage of local news, food and culture with no paywalls.
Make a one-time donation today for as little as $1.