The Perfect Doctor Who Story for the Age of Trump 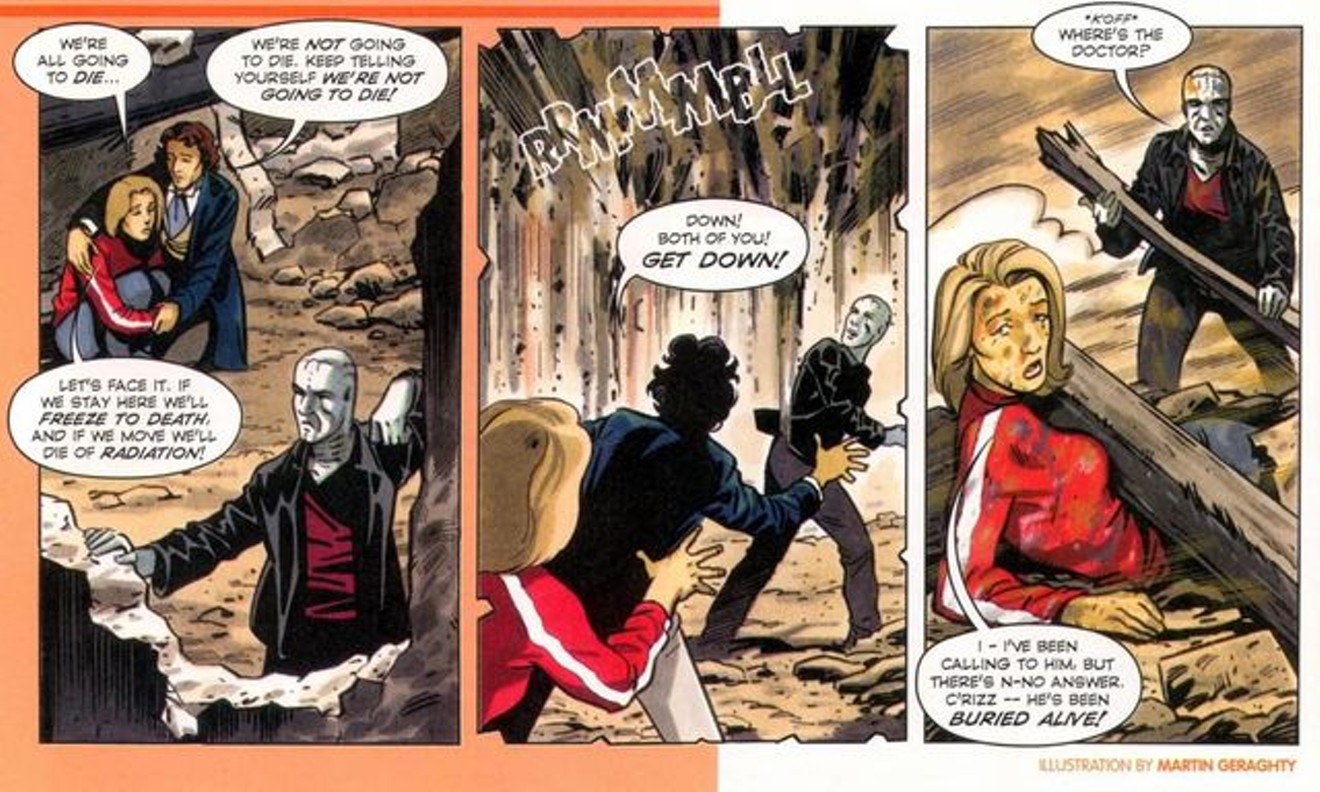 Comic preview of "The Last" from Doctor Who Magazine #349 Illustration by Martin Geraghty
Warning: major plot spoilers ahead

As I’m writing this, the weird alternate dimension that we currently inhabit is continuing to get more and more surreal in year two of the Donald Trump administration. Rassilon only knows what shenanigans will have happened by the time this piece actually runs, but recently the president’s own lawyer got raided by police, state media in Russia is telling citizens to prepare for nuclear war, and one of the nation’s largest tabloids is being accused of buying up negative stories about Trump to kill them.

As a normal president once said, worried, bitter people take refuge in religion. For me that means seeking comfort in Doctor Who, and it was on a re-listen through my Big Finish Audio collection that I stumbled across the perfect story for stressed American Whovians in the Age of Trump. It’s “The Last,” written by Gary Hopkins and directed by Gary Russell. You can download it for $3, and I encourage you to do so.

Here’s the set-up. The Doctor (Paul McGann) and Charley (India Fisher) have been stranded without the TARDIS is a divergent, timeless universe. After picking up a Eutermesan named C’rizz (Conrad Westmaas), the trio wander through various “zones” seeking the TARDIS.

“The Last” lands them on the planet Bortresoye, where all life is virtually extinct due to the government led by Excelsior’s (Carolyn Jones) nuclear holocaust. The Doctor, Charley and C’rizz seek shelter from the nuclear winter, and find themselves caught up in the last days of the planet.

It’s Excelsior that most puts me in mind of the current occupant of the Oval Office. She and Trump have a lot in common. Exlcelsior spends her entire time prepping for the inevitable victory parade at which she will be presented to her people with full military honors. This “victory” is a completely false one, as Exclesior refuses to believe that outside the protected bunker she holds court in the war went anything but perfectly.

Trump as well is obsessed with the idea of a victory parade. Indeed, his desire for the elusive “winning” he promised as a candidate has taken very bizarre turns since January of 2017. For istance, there was the head-scratching insanity of his insistence that his presidential inauguration crowd was some sort of record-breaking affair. It wasn’t. Excelsior, too, cannot fathom the notion that above-ground there isn’t an adoring public. The Doctor claims she has entered a fugue state brought about by trauma. That’s probably the kindest way to look at it.

More accurate is her reliance on sycophantic ministers to preserve her illusions. There’s a portion worth transcribing in full between Minister of War Voss and Minister of Peace Tralfinial…

Voss: What is it now, Tralfinial? I have work to do.

Tralfinial: Falsifying more statistics for Exclesior? She may be mad, but she’s not stupid. It’s pretty obvious to everyone that the war didn’t go well.

Voss: Obvious to everyone except Excelsior who prefers to believe that it went extremely well.

Tralfinial: Only because you’re feeding her misinformation.


Trump’s reticence for facts has become absolutely legendary. He’s caught between his preferred media diet of Alex Jones conspiracy theories and Fox and Friends talking points, as well as surrounding himself with people who are more handlers than counselors. In general, when important information is presented to the president, he largely ignores it.

Much of this is Despot 101, but Excelsior and Trump have one more thing in common. The radio play is bracketed with broadcasts by Excelsior to her dead world reassuring the people that everything is glorious and fine. Like her, Trump’s concern is to have his message heard. It’s not to the speakers over a burnt wasteland stage yet, but Twitter will do for now. As former FBI Director James Comey releases his tell-all book, Trump is out there tweeting the most bizarre non-facts as fast as he can, assuring followers that everything he doesn’t like isn’t real and that any minute things will be better than ever.

It’s bleak stuff, so why listen to a science fiction facsimile when the real thing is constantly barraging the public across every social media app in existence? For me, it’s the ending.

As the story concludes, it turns out that Bortresoye is in a cycle of life and death where everything on the planet must keep suffering annihilation until they learn their lesson regarding morality and destruction. Excelsior is meant to be the titular Last, the final death that restarts the new cycle. The arrival of The Doctor, Charley and C’rizz interrupts the cycle, and it’s through the compassion, kindness and lessons of the trio that the cycle is finally broken. After a selfless sacrifice, The Doctor wakes back up on Bortresoye with Excelsior now a benevolent leader who averted the war the story opened with.

The Republican party is dying. Record numbers of members of Congress are leaving as the party’s flag bearer deals with constitutional crises, corruption and widespread unpopularity except among the fanatical. A policy of reactionary, violent resistance with no thought to the future has been coming home to roost. I don’t anticipate Trump coming out of this as a leader, but it is possible that being faced with the consequences of mad governance the conservative side of the spectrum might actually avoid the worst case scenario in their next incarnation.

Just maybe, Trump, too, is the Last. It’s something to hope for while listening to tales late at night, at least.