Candytopia is Better Than Willy Wonka in Real Life 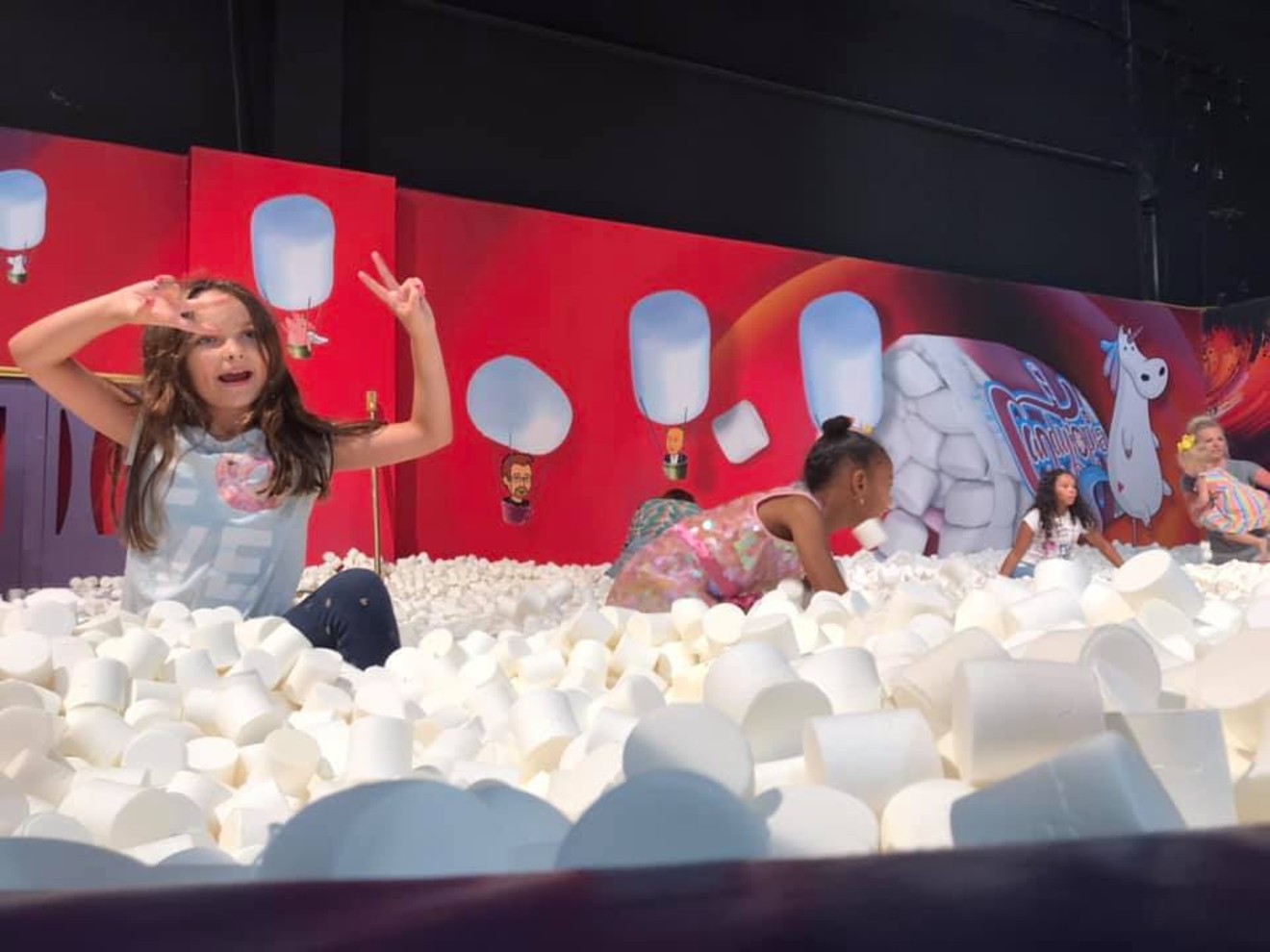 The marshmallow pit Photo by Jef Rouner
Candytopia is a traveling interactive exhibit that has just hit Houston for the summer, and it is also an experience that will literally melt all worry and cynicism from your bones. Walking through it is like being in a dream that also has helpful customer service.

The installation is part playground, part art gallery. Conceived by “Hollywood Candy Queen Jackie Sorkin, realized by master fabricator Zac Hartog, and brought to life by life-long retailer, John Goodman,” it clearly aims to be the closest thing to a real life Willy Wonka chocolate factory as possible. Is it? No, it’s better because in real life a room full of edible grass and chocolate rivers would be terribly unsanitary and impossible to reset for other visitors.

Instead, Candytopia is populated by a wide variety of candy sculptures, all of which have been shellacked for preservation. Everything from sharks to famous paintings have been replicated in gummy bears and lemonade belts. They really do look like the work of a mad genius. Here are a few examples.

Prince's guitar, made of jelly beans
Photo by Jef Rouner
click to enlarge

The stripes are made of Spree. Where can you even BUY Spree anymore?!
Photo by Katy Rouner
Aside from appreciating the art, there are a wide variety of activities. A candy playground is the first room, with swings and metal flowers that exude sandy scents and giant gumballs to play around with. The biggest hit for my daughter was the giant marshmallow pit, where they could swim in a pool of foam desserts. Every few minutes, the air cannons are loaded to fire more foam into the air, a crazed, delightful thing that reduces every child and most adults to squeals of delight.

The place I lost it was the confetti room. It could not be more literal. Cannons blast confetti, the workers dump it on you, a manager has a party cannon, and it even distributed into the air from the back ends of flying pigs (there is an inordinate amount of interaction with pig buttholes in Candytopia). The old adage of “too much is too much, but WAY too much is just right” lives in the confetti room, and every moment feels like a celebration just for you.

Now, that might sound a bit like Hell depending on how much you like having shredded paper thrown at you, but the thing that struck me the most about Candytopia was its sheer consideration. Never have I been anywhere I felt the staff cared so much about individual people.

Groups are let in fifteen or so people at a time so it’s never crowded. Each room has free candy you are invited to take by the handfuls as you pass through to make up for the fact you can’t lick the snozzberries on the wall. Alongside each one is a list of allergens contained within so that parents can avoid them, which is another thing that you never considered with Wonka. The Oompa Loompas probably don’t have a song for someone dying from anaphylactic shock after wandering near the nut room.

The staff is incredible, drilled like a ballet. They’re on hand at all times to take your picture or help with the AR app you can download (it’s pretty shoddy, but I’ve yet to go to an event where the AR app wasn’t). In the confetti room, the man with the party cannon was always vigilant to avoid people wearing skirts and dresses lest he lift them with the air. They even warn you about possible sensory overload portions of the walkthrough. Flashing lights and the occasional claustrophobic environment aren’t fun, but they are tended at Candytopia with such regard and care that you end up having a great time.

It is pricey; I’m not going to lie. Adults are $28 and kids are $20. You can balance that with the fact that you’ll each walk out with about $10 of free candy (bring a backpack), but it’s still a lot for an hour or so worth of entertainment. It is absolutely worth every penny, though.

Candytopia is a lovingly curated look at candy and the whimsy of frivolous life. Being there puts all adult concerns away, and it is managed with such excellent consideration of the needs of all people that I find it better than any fantasy. My daughter was annoyed the marshmallow pit wasn’t really marshmallows, but I didn’t see anything but sheer joy as she dove in and let her imagination do all the legwork. You can’t help but dream when you’re there, and that is a an experience almost beyond price in these troubled times.

Candytopia runs daily at 7620 Katy Freeway through September 29. Visit Candytopia.com for more information.
KEEP THE HOUSTON PRESS FREE... Since we started the Houston Press, it has been defined as the free, independent voice of Houston, and we'd like to keep it that way. With local media under siege, it's more important than ever for us to rally support behind funding our local journalism. You can help by participating in our "I Support" program, allowing us to keep offering readers access to our incisive coverage of local news, food and culture with no paywalls.
Make a one-time donation today for as little as $1.