The Will to Create in Bo Burnham: Inside 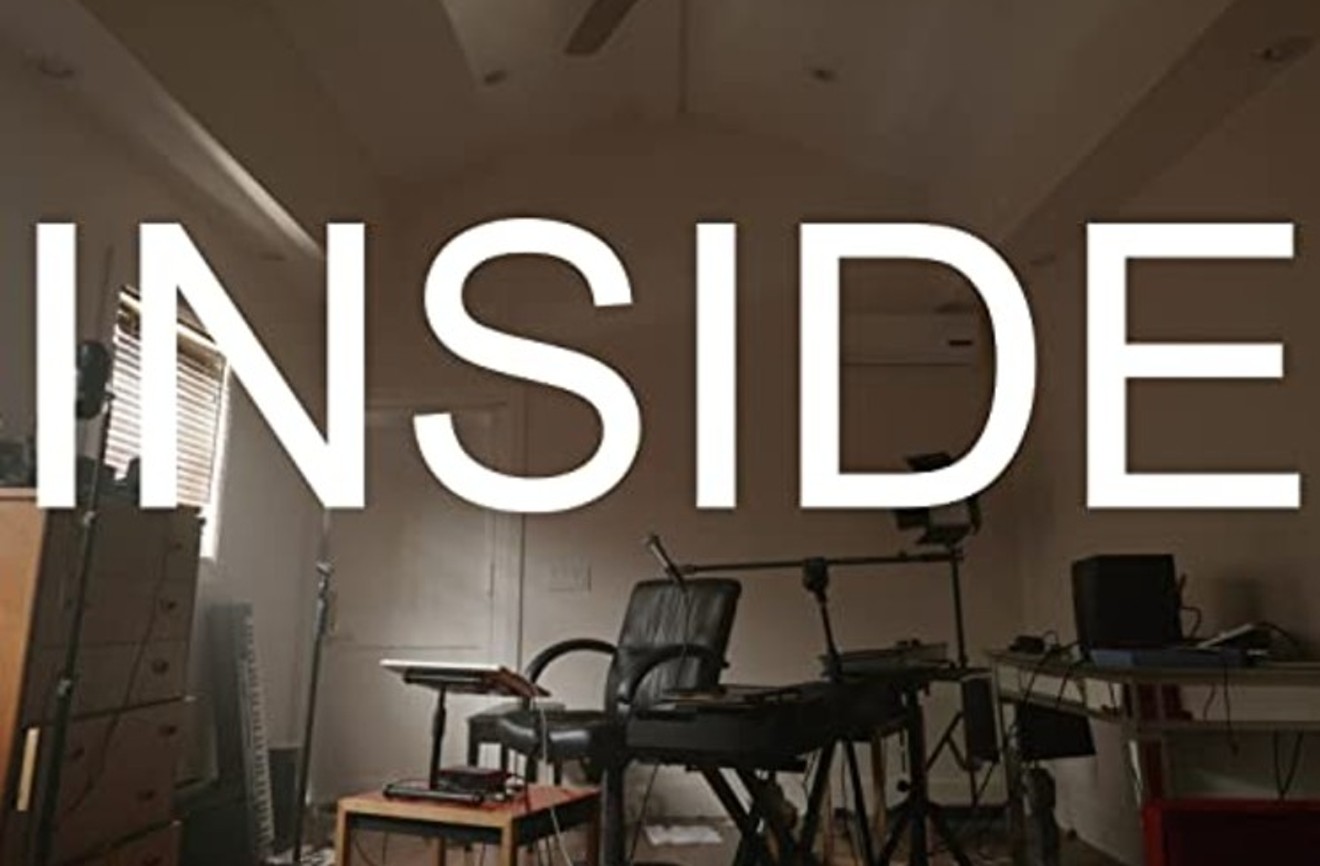 Bo Burnham: Inside debuted on Netflix the last day of May 2021. Viewers then spent all of June talking about the special — written, directed, filmed, edited and starring the comedian/musician — in mostly glowing terms. It’s now July and there’s no indication that interest in or discussion of the special is waning.

In the first week of the month, Mashable listed one of its songs as a “catchiest earworm of 2021.” Salon did a story on climate issues Burnham addresses in the program. Polygon commented on the parasocial relationship between the creator and his audience. Inside has got legs. It may be the 2021 answer to The Queen’s Gambit, Netflix’s breakthrough program of the pandemic.

Inside is Burnham’s take on the pandemic, filmed in a single room at his home during the quarantine, and specifically how it affected him (us) socially, emotionally and artistically. Rotten Tomatoes ratings and online chatter suggest it struck more nerves than all the reflex hammers in a med school. We were interested in how closely Burnham’s experiences from Inside mirrored the real lives of some real-life creatives we know.

Alex Pritchett has been in a band half his life. The founder of Houston punk group Action Frank wrote on social media, “The new Bo Burnham special is the most real, relatable, existentially beautiful, creative thing I’ve seen in a long time, Go watch it.” That post was made a few days after the program debuted. A month later, Pritchett hasn’t changed his mind about Burnham’s tour de force.

“It was super relatable from this kind of existential sort of low point in life,” Pritchett noted. “I think that’s something a lot of people are going through with all of the COVID stuff and everything. Isolation, I think, bred a lot of creativity and an outlet. That’s what he did.”


Pritchett said he was able to work during the downtime but, like Burnham, needed a new creative outlet to cope with the unusual circumstances.

“I started a band. You’ve gotta make the best of your time, especially when the whole world stops, you know. What do you do? I started a band, The Lockdowns."

The band with the apropos name formed in March 2020 and has been busy of late, unveiling a music video, performing at the recent Punks and Pints Music Fest and adding a September 17 show at Dan Electros supporting Young Costello, a ska band from San Antonio. Pritchett said he could relate to Burnham’s desire to create during isolation.

“It was really cool because he pretty much locked himself in a room and wrote an album by himself and composed it and everything. He had a little bit of everything, but I think I got this kind of ‘80s vibe or techno-y sort of thing,” he said of the music. “He’s known for piano, so then he comes out with this special and it’s him in this room with cameras and lights and he records himself recording a special and at the same time recording an album. He was doing a lot of different things at once. I think it came out really cool, different for him and different for the audience too because they associate him with stand-up.”

Burnham’s special has been hailed as funny and insightful but also devastatingly accurate concerning the pandemic’s impact on mental health. Mikey Thomas, of “Florida’s heaviest skate punk trio” The Antidon’ts, spoke for many when he posted on his socials: “The new Bo Burnham special is a must see. Just... wow. What an emotional rollercoaster through a brilliant mind in turmoil and it deserves every bit of praise that it receives. That said, I'm never watching that shit again.”

Thomas said the band “got a bit lazy” during pandemic but have returned to writing music to follow up their very fine 2018 record We Reap What You Sow. They’ll be playing their first live, in-person set in 18 months later this month in Cape Coral, Florida and have a 2021 tour planned.

Robin McDumphy appreciated Burnham’s unflinching look at the pandemic’s toll on mental health and the will to keep creating despite it. McDumphy is a violinist and band member of We the Heathens and Cave Paintings, a pair of Wisconsin-based bands. The pandemic meant focusing on her solo work and Burnham's example has inspired her to keep that focus.

“By allowing himself to be completely vulnerable, he created a wonderfully human experience while giving some insight to how he managed his time and mental health while living in isolation, especially after already taking five years off from performing to manage his panic attacks. I really appreciated his openness when talking about suicide, even though he laughs it off as a joke, everyone has had those feelings before and it’s nice to see it acknowledged and understood that the world wears down on everyone sometimes,” she said.


“Throughout my own isolation, I know I and my friends struggled through all kinds of feelings while trying to keep creating, so it felt good to see how everyone has been kinda in the same boat, even people with money and status. Although I’ve always played in bands and with other people, the pandemic definitely inspired me to play more music on my own and see what I come up with — thank goodness for loop stations. I live in a basement with no windows so I’ve definitely had many long nights and days just getting fully sucked into a song or an idea without really having an accurate concept of time. Watching Bo do the same thing throughout all of Inside made me feel much less alone in my insanity.”

Bryce Perkins burst onto Houston’s music consciousness with Jody Seabody and the Whirls. He’s looking to make waves with a new project dubbed The Deamins. He’s also a comedian and can be heard weekly on The Movie Gap podcast with his longtime friend, Chase Austin. With a foot in each medium, we sought his take on the special.

“I was already a Bo Burnham fan from his Make Happy special. I’m not the biggest fan or anything but I like what he did with the Make Happy special and that Kanye parody he did was genius,” Perkins said. “So, as soon as I saw (Inside), I had it on my list, but I was waiting for the right time to really take it in. I will just say, man, I was not disappointed. I was watching it with my wife, Ash, and we felt like we were watching something pretty special. I feel like it’s one of the best pieces of entertainment, art content, whatever you wanna call it, that I’ve ever seen.”

That’s saying a lot, even from someone whose schtick on the podcast is how he’s not seen many iconic, influential films. He and Austin will be delivering a live episode of the program at Comicpalooza this weekend.

“I’m real excited about that. We got to do that the year before the pandemic, the last one that they had, so that’s going to be a lot of fun. Ron Perlman is the main guest that day so we’re going to do Hellboy, which I hadn’t seen, so that should be really fun.”


Perkins said he’d just started a job at a bank when the pandemic hit. His livelihood wouldn’t allow him to lock down for months the way Burnham seems to in the special; but, he still felt the anxiety and depression the pandemic created, which is poignantly represented in Inside.

“All of a sudden, I start seeing reports of this fucking deadly new disease, this novel virus, and I work in the public, touching money. And so now I’m like, ‘Oh, I’m gonna die. This is great.’ And then, people started talking about going into lockdown to be safe, but of course it was no, you’ve still got to come to work every day. It was very fucking scary, man. I didn’t really have the same quarantine experience as a lot of people, like my wife, she actually did stay home and has been home this whole time. I was still out there going to work.

“But, what did happen, I had to stop doing live performance comedy. Jody had just decided to stop playing and I was feeling kind of lost and I had just found this community over at Station Theater, I was just feeling like I was part of something new and found another love of mine and then that all had to end.

“It was a very weird journey of finding something that you love and then all of a sudden having it being ripped away,” Perkins said.


Like Burnham and so many other creatives, he got to work, using art as a cathartic release. He and Austin kept producing Movie Gap episodes via Zoom until it was safe to meet again. And, he recorded, mixed and mastered songs for The Deamins debut EP.  He admitted some anxiety about releasing the new music, but found some support for this new endeavor in Inside.

“Watching Bo’s special I was like, ‘Bro, I can fucking relate,’ just sitting there in self-doubt and then wanting to re-do everything. But, I’m finally ready where I’m like, ‘Fuck what people think, you’ve been putting a lot of work into this, just put it out there.’”

McDumphy summarized for the group by noting even a world slowed by a global crisis can’t stop human creativity.

“It just blows my mind to try and imagine how devastating it must have been to have taken the time to truly heal only to have a global pandemic come out of nowhere to say ‘Actually, fuck your plans, you gotta stay home alone longer,’” she said. “I think it really shows just how incredibly determined he was to create again, even if it meant doing everything by himself and working on it for over a year. Bo truly is some kind of mad scientist genius who continues to create and live purely out of spite, which is probably the most inspiring and powerful feeling to come out of a comedy special. And again, the writing is fantastic and catchy. It’s nice to have some silly songs to sing to yourself through those rough days and continue to carry on, even if only out of spite.”
KEEP THE HOUSTON PRESS FREE... Since we started the Houston Press, it has been defined as the free, independent voice of Houston, and we'd like to keep it that way. With local media under siege, it's more important than ever for us to rally support behind funding our local journalism. You can help by participating in our "I Support" program, allowing us to keep offering readers access to our incisive coverage of local news, food and culture with no paywalls.
Make a one-time donation today for as little as $1.