AstroWorld's 50th Anniversary: A "Magical Time" for the Park's Employees 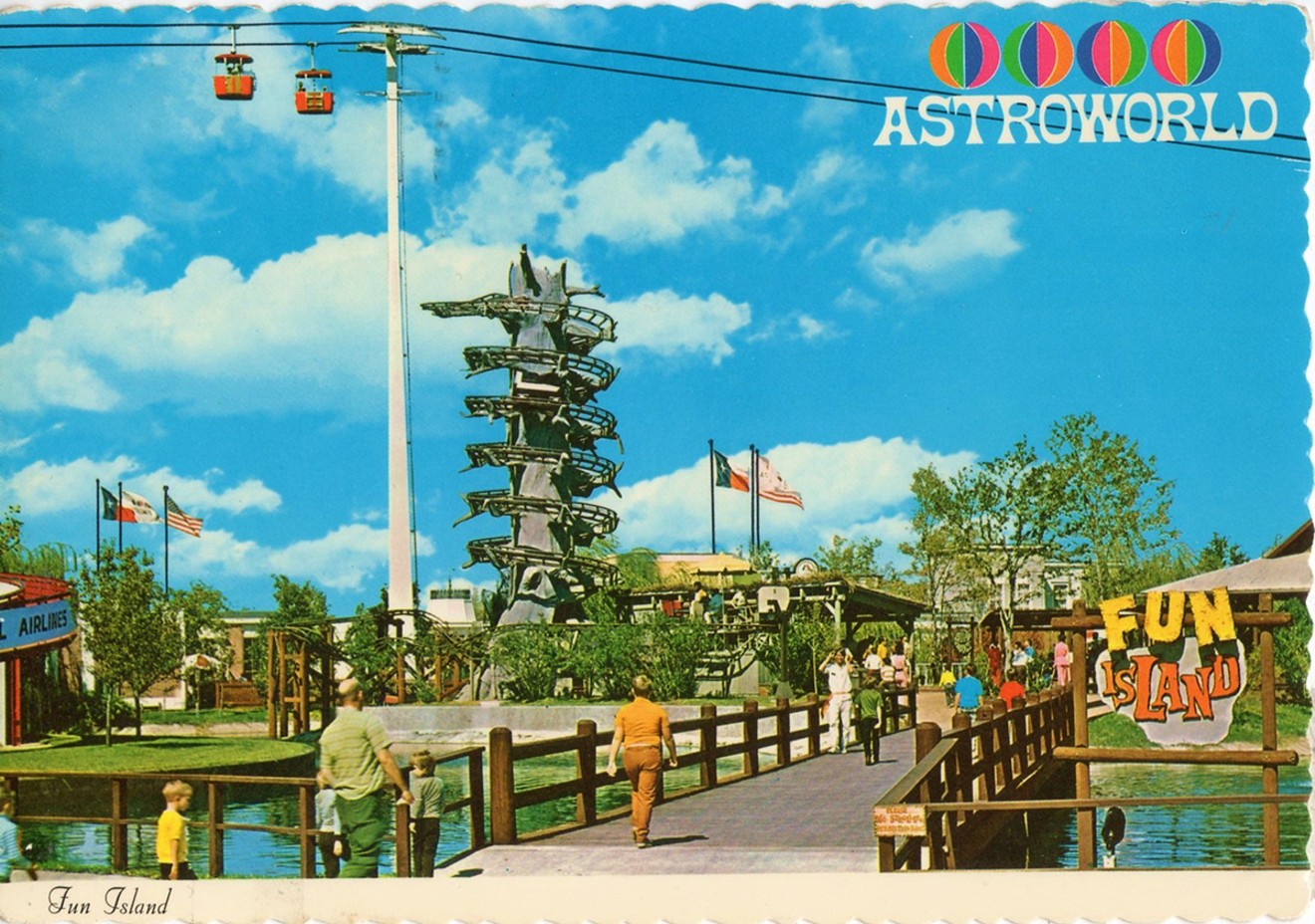 Maureen Mantrop-Utterback remembers applying for a job at AstroWorld in her high school cafeteria. "I was a shy, introverted, little low on the self esteem 16-year-old. AstroWorld changed all that for me. I learned responsibility, loyalty, courage and the ability to believe in myself. When the park was closed for the season, we had a small group that continued to work, known as winter work crew. We mainly cleaned the lagoons which was a huge job. It's hard to imagine kids today taking on that task. We loved it," writes Mantrop-Utterback.

She says her first big responsibility came about when she was made lead foreman of the new season pass office in 1979. "At 19 years old I had a crew of 150 people and a lot of money to handle. I finally got to be lead foreman of a ride later that year: the Astro Needle. For someone that had once been shy, I had to give a spiel numerous times a day and loved doing it," writes Mantrop-Utterback.

"What I came away with from my time there was a strong work ethic I still have today. I have never walked into an interview thinking that I wasn't the best person for the job. I have always held management positions in my adult life and have always felt I got the training while I was at AstroWorld," writes Mantrop-Utterback. 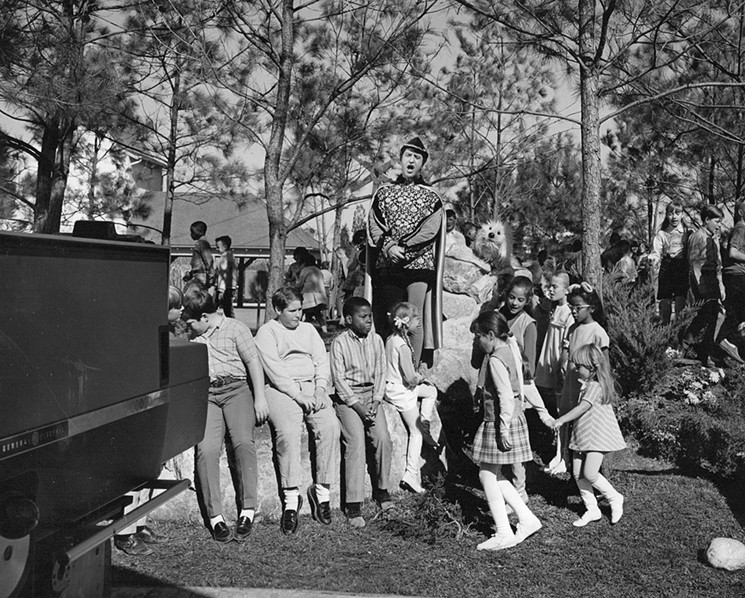 Chris Daigle's father took this photo of television personality Soupy Sales filming a special with puppets and children in Alpine Valley in 1968, shortly after the park opened.
Photo by Don Daigle
The Concerts:

Top shelf performers stepped on to the stage at AstroWorld's Southern Star Amphitheater over the years, including Billy Idol, Grateful Dead, The Monkees, Bob Dylan and others. Chris Daigle writes that he was working as a stage hand at the popular amphitheater. "The Beach Boys held a concert and one guy kept stepping on a cable and it was about to become unplugged. That was the main power cable to the whole sound system, so I laid on the floor holding the power cable together through the whole show hoping nobody would walk on my hands holding this thing together."

Dan Dunn says he was always interested in art and and would sit in the back of the classroom and draw his own superhero comic books. But he lost interest in school and was devastated when he failed ninth grade. "My father had me tested to figure out what to do with this kid. I scored very high in art and the counselor advised my dad to get off my back and consider sending me to art school," writes Dunn, who went on to enroll at Sam Houston State and took a summer job learning to draw caricatures at AstroWorld.

"I loved it! So much that I worked nine seasons there eventually becoming the artist trainer and began working private parties while I also worked in the advertising business. I drew caricatures for 30 years beginning in 1977. At my peak I was drawing for 200 events per year," writes Dunn.

Dunn, a speed painter and owner of his company PaintJam, has performed for audiences around the world. A video of him painting Ray Charles went viral in 2007 and he has since appeared on The Tonight Show Starring Jimmy Fallon, The Ellen DeGeneres Show and a Super Bowl pregame show. "It’s been an amazing ride and I owe it all to paying dues, wax on and wax off, in the booth at AstroWorld," writes Dunn. "What a park. What a magical time of my life. I’m so sad that it’s gone."

Jeff Martin, another caricaturist, has also done quite well, moving on to become president of the Harvard Lampoon, working as a comedy writer for the Late Show with David Letterman alongside Chris Elliott and moving on to write for The Simpsons.

"I was a caricature artist at AstroWorld for several summers in the late 1970s," writes Martin. "Our booth was in the Alpine section near the sleigh ride mountain, which was called 'Der Hofheinzberg' after the famous judge who dreamed up the Astrodome. A groovy adjacent area was Mod Ville, probably named the week before people stopped saying 'mod.' The artist costume was a simple smock so we definitely had it better than all the teenage employees who had to don cowboy outfits or lederhosen. Years later I wrote a Simpsons episode, 'Lisa the Beauty Queen,' which begins with her getting an amusement park caricature. It was all based on memories of drawing thousands of big-head-little-body cartoons of fellow Houstonians – many of them wearing Fonzie T-shirts – while listening to piped-in yodel music and thrilling to the nearby lagoon exploits of the Great American High Diving Team." 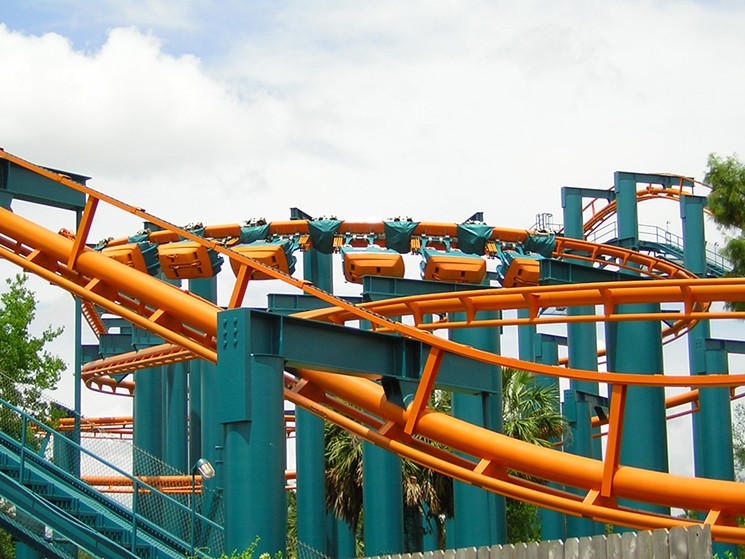 Karen Robertson Schenck, who worked at AstroWorld in 1970, writes that she had the happiest job in the park. "I was a balloon girl at AstroWorld. Another employee would blow up balloons for me that would lift me up a bit as I walked. I felt like I was floating around the park and my job was to talk to people and sell happiness. I talked to parents, kids, AstroWorld staff and park workers like myself. I helped calm crying parents, find lost children, and locate misplaced items," writes Schenck, adding that she also sold balloons.

"Over the years I have had many jobs that I enjoyed but none compared to the happy job at AstroWorld. Many interviewers have asked me what my best job was and I always answered immediately, with a big smile on my face, 'The balloon girl at AstroWorld,'" writes Schenck. 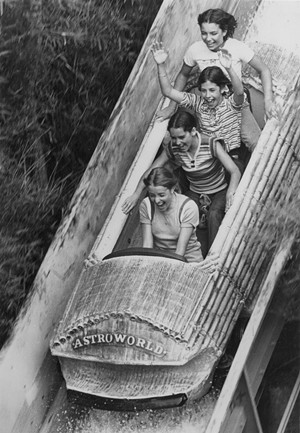 Chris Daigle took this picture of the Bamboo Shoot in 1979 when he was photographing for a local magazine.
Photo by Chris Daigle
The Camaraderie:

Leticia Aleman says the biggest thing for her is that lifelong friendships were formed among the employees at AstroWorld. "Working here introduced me to teens of all types. Growing up in a small town within Houston meant teens were 'normal' there and if you were outside the norm the circumstances were not discussed," writes Aleman. "Being exposed to lovely co-workers who were gay, bi, trans or just plain didn't fit in opened up a whole new world to me: one of acceptance, love, support and respect for all who were different."

The Purveyors of Food:

When the Houston Press wrote an article in 2012 about AstroWorld ephemera for sale on eBay, Stusnow1 wrote in with this comment.

"I worked at AW warehouse for about 6 months when I was going to UH. Most fun in the world! I delivered the worst food that humans could consume from a cushman cart on roads that honeycombed the park but were hidden from the public. Except at railroad crossings for the "frontier train." Then I was exposed to the public in my blue dickies and denim shirt, proud uniform of the warehouse guys. There were 3 of us. The train riders would stare at me like I was a rat on their table, not quite a wild west bandit. I was authentic, though, because I was usually smoking a hand rolled cigarette."

Still Jonesing for more AstroWorld memories? You're not alone. An AstroWorld 50th Anniversary Employee Reunion is scheduled for July 21 but it's sold out and has a waiting list. Former staffers can learn more and connect with others on the Facebook event page.

"What makes this reunion different I think from a high school reunion is that we don't care if someone got fat, bald, rich or poor. We want to know about each others' lives. Some of us have not seen each other for decades," writes Maureen Mantrop-Utterback. "I left Texas in 1987 and moved to Iowa. With no social media at that time, a lot of us lost touch. I know as years went on AstroWorld seemed to have lost that family atmosphere. When I found out that is was closing for good, I really felt like I had lost a loved one."

(L) Barrel of Fun in the Mod Ville region of AstroWorld and, (R) what is it with those red socks?
Photos courtesy of the Tommaney family
Didn't Work There But Still a Fan:

When AstroWorld was being built, company executives commissioned Ed Henderson and his team to create a scaled model of the theme park. Henderson rediscovered that model in a warehouse decades later and it has since been dusted off, spruced up and is on view at the Houston Public Library, 500 McKinney, in an ongoing display of Houston's history.

Chris Daigle, who has seen this replica of the park as it was in its early years, writes that it's very detailed. "Even people and cars!" 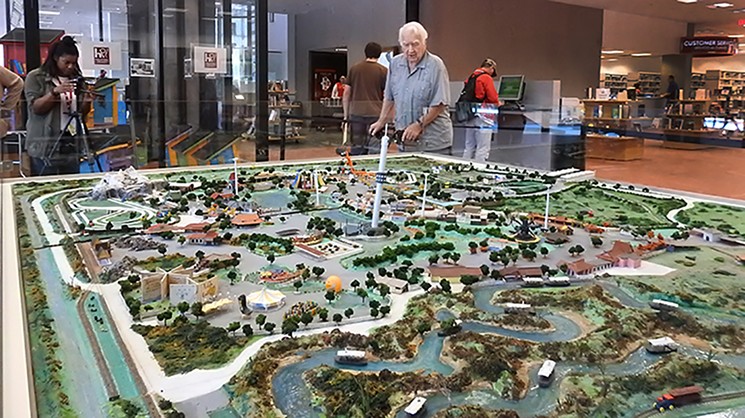 Artist, model maker and former Disney animator Ed Henderson at the installation of the scale model of AstroWorld at the Houston Public Library.
Photo courtesy of the Houston Metropolitan Research Center, Houston Public Library
KEEP THE HOUSTON PRESS FREE... Since we started the Houston Press, it has been defined as the free, independent voice of Houston, and we'd like to keep it that way. With local media under siege, it's more important than ever for us to rally support behind funding our local journalism. You can help by participating in our "I Support" program, allowing us to keep offering readers access to our incisive coverage of local news, food and culture with no paywalls.
Make a one-time donation today for as little as $1.