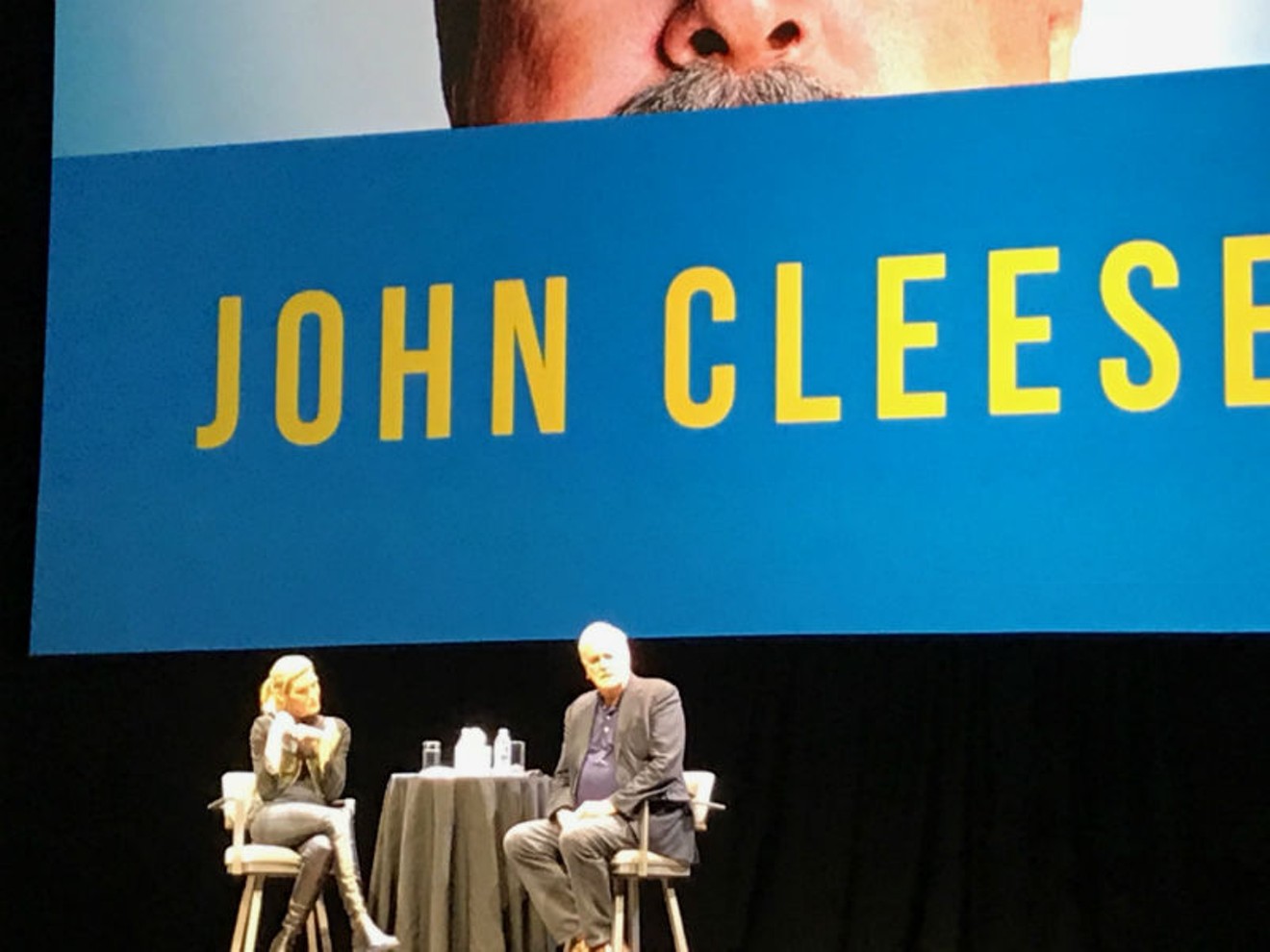 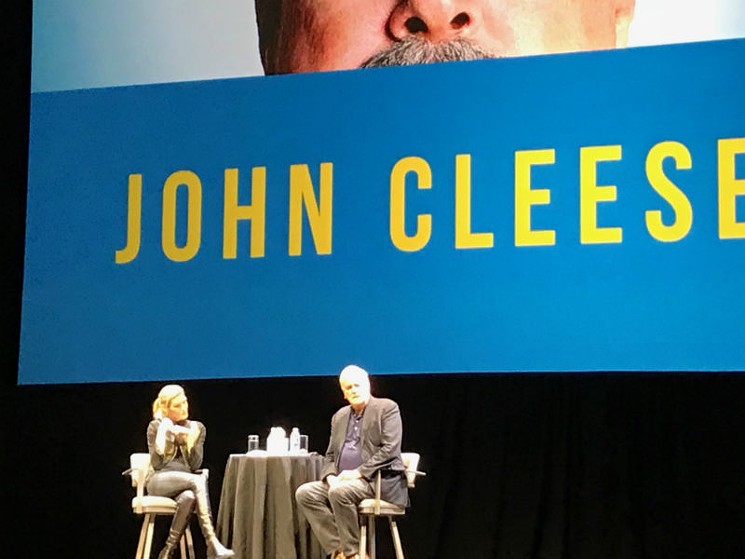 John Cleese invited a bunch of Houstonians to his den for home movies last night. At least that’s what the comedian’s tour stop at Smart Financial Centre felt like. He spent part of his Thursday evening perched in a tall chair, with a coffee table nearby and his daughter, Camilla, on hand to spur the dialogue between the comic legend and his invited guests. As a member of the famed Monty Python troupe, one of Cleese’s greatest “home movies” – Monty Python and the Holy Grail – was the centerpiece of discussion following a full screening of the film. Cleese addressed audience questions for an hour following the film he and some friends shot in Scotland some 40-plus years ago. That footage has gone on to become one of the genre’s most revered works.

The evening began promptly at 8 p.m. with no coming attractions (though some approaching events at Smart that night be worth your time and money include an evening with sexy septuagenarian Tom Jones, rocking out with Judas Priest and being mesmerized by the captivating Diana Krall) and no sign of John Cleese. Smart Financial rolled Holy Grail in its entirety and people giggled and guffawed as if they’d never seen the movie 10, 20 or 30-plus times. The seat-inhabiters in Section 102 started cackling right from the outrageous opening credits. They quoted lines about African and European swallows and ducks and wooden witches, word for word. After all this time, the movie still garnered big laughs, particularly during scenes where Cleese portrayed a French guard with roast-worthy insults and an enchanter who warned the film’s heroes – King Arthur and his Knights of the Round Table – of “a creature so foul, so cruel that no man yet has fought with it and lived!” (Spoiler alert: it’s a bunny rabbit).

The film ended and there was no intermission. The lights went up and out came Camilla Cleese, also a professional comedian, to moderate the evening’s address and introduce her father. He strode out, lifted his arms in triumph to thunderous applause, then turned around and walked offstage with a goodbye wave. He returned, of course, with a “Hello, Sugar Landers,” then answered questions about the movie, the Pythons and his life and career. The first question asked which is his favorite part of the movie, a query most Python fans can’t even answer, there are so many high moments from which to choose. Cleese answered, “I got better,” a line of dialogue he delivers perfectly in part of the film. He described Python as “six writers who happened to perform,” and “a quarrelsome lot,” who argued about the writing until it was perfected.

Other questions included: "Which part did you want to play that you never did? (Brian, from Life of Brian); "How much alcohol was consumed during the making of the movie?" (“Oh, a great deal. The main thing I remember is that is where I discovered that I love white Burgundy,” he said. “That’s chardonnays coming from the Burgundy region, and I suddenly realized what heaven was.”)  "Is there anything the Pythons considered too absurd to film? (“Yes, we wrote a film about a guy who became president of America who’d never read a book.”) Even the audience got in on the act, asking “Does Kellyanne Conway weigh more than a duck?” which threw Cleese into a fit of laughter.

Over the evening, there were actual home movies. Cleese rolled footage of his eulogy for the only deceased member of Monty Python, his longtime writing partner Graham Chapman, and he spoke fondly of him while the footage rolled into a bit where the Pythons bring Chapman’s urn to an interview and appear to spill his ashes.

We were entertained and so was Cleese, apparently. He shared that Texas audiences are some of his favorites, a theme he echoed in our interview ahead of the show, but reminded us that the only city that continues to disappoint is El Paso, which “makes Cleveland look like Paris.”

Personal Bias:  One idle afternoon in the early-1980s, my wife (then high-school aged girlfriend) and I were hanging out with my pal, Warren Najarian. Warren started talking about Monty Python and the Holy Grail and Tish said she'd never seen it. Knowing the movie was on VHS somewhere, we set off to rent it. We went to the Foodarama on S. Post Oak, where the video rentals were positioned near the produce section's banana racks. No luck. We tried the mom-and-pop video store on Beechnut, across the street from Meyerland Mall, with its pervasive aroma of incense and beaded curtain leading to the adult videos. Try again. We drove clear over to Fondren and Bellfort to a rental store that was next to Electric Avenue, a strip-mall night club that allowed us in to drink Blue Hawaiians and Miller Lites, though we were clearly too young to legally do so. Fresh out. A simple exercise suddenly became an Arthurian quest for, well, the Holy Grail. Ultimately, we found a copy at Federated Electronics Superstores (home of Fred Rated, God rest his soul!). By the time we grabbed a Mr. Gatti's pizza, a 12-pack of Killian's Red and popped it into the VHS player, Tish was exhausted from the day's events. She fell asleep sometime after Arthur's battle with the Black Knight.  Thirty-something years later, Tish is still fairly disinterested. She took a pass on the evening and I was accompanied to the Cleese show by my pal, Warren, who laughed hysterically at the movie like he was watching it for the first time.

Overheard in the Crowd:  Numerous lines from the film repeated lovingly and delivered verbatim by Pythonites, right on cue.

“It’s The Godfather of comedy,…it’s ‘Rosebud.’”

Random Notebook Dump:  Have a great weekend, everyone. I’ll be at home binge watching Fawlty Towers for the next couple of days.