Reviews For The Easily Distracted:
Glass 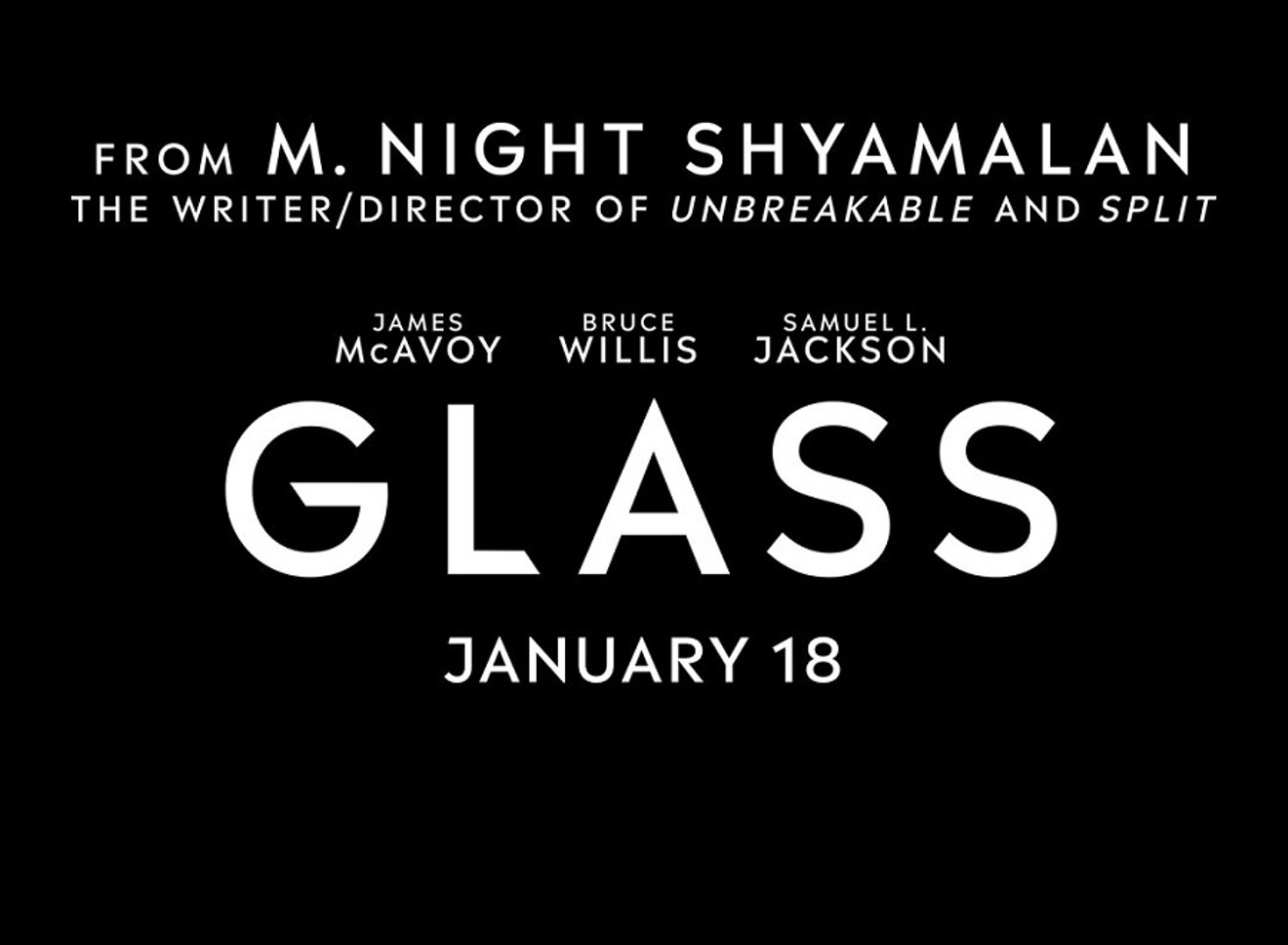 Describe This Movie In One The Doctor Takes a Wife Quote:

DR. STERLING: You're so brittle that one of these cold days you're gonna break up into a million pieces, and when that happens, I want a seat right in the grandstand!


Brief Plot Synopsis: He who makes a Beast of himself gets rid of the pain of being multiple men (and women).

Rating Using Random Objects Relevant To The Film: 1.5 Pancho & Leftys out of 5.

Epic Records
Tagline: "The world of superheroes will be shattered."

Not So Brief Plot Synopsis: 19 years have passed since the wreck of Eastrail 177, when sole survivor David Dunn (Bruce Willis) discovered he could psychically sense crimes people have committed and was ... unbreakable. Wearing a green poncho and patrolling Philadelphia as "The Overseer," Dunn discovers where four kidnapped teenage girls have been hidden by the multiple personality disordered Horde (James McAvoy). The two battle, but are apprehended and taken to a psychiatric hospital, where they're placed in the charge of Dr. Ellie Staples (Sarah Paulson), who claims to have a therapy to heal those under the "delusion" that they're superpowered. Also in her care: Dunn's old nemesis Elijah Price (Samuel L. Jackson), whom you may know as "Mr. Glass."

Glass, the director's final entry in his so-called "Eastrail 177 Trilogy" (following Unbreakable and Split), spends a wearying amount of time deconstructing classic comic book structure and tropes, all with roughly the same subtelty he used to address film criticism in Lady in the Water, which is to say by having characters explain — at length — what we in the audience are seeing/about to see and how we should react to it.

The point, as far as anyone can tell, is to differentiate the heroes and villains of these movies from those in their Marvel or DC equivalents. In Glass, power comes as much from within as from a super serum or the yellow sun, and if the stakes are somewhat less dramatic than saving the world from Steppenwolf or Canned Heat or Jethro Tull or whatever, the consequences are just as dire. Perhaps more so.

This is a charitable reading of Shyamalan's intentions, because if Glass shows us anything, it's that the director learned almost nothing following his fall from/return to critical and box office grace, relying on his characters (Polley suffers the most from this) delivering mind-numbing exposition dumps and not one but three twists, because once your shtick has been exposed, you might as well triple down on it.

And that's what makes Glass such a deeply unsatisying experience. It really seemed, after the positive reaction to The Visit and Split, both of which were heralded as a "return to form" for Shyamalan, that he might have learned to dial back his love of "gotcha" moments and inability to tell instead of show. Instead, his characters make sure every plot point is driven home with all the nuance of a tack hammer, the better to metpahorically yell "surprise!" when everything turns out to be a red herring.

Shyamalan reunites most of the casts from the previous installments, including Anya Taylor Joy as Casey (Split's sole Horde survivor) and Spencer Treat Clark as Dunn's now-adult son Joseph. The young 'uns comport themselves well, as does than Willis, who shows more life here than he has in years (that may just be the stunt double footage, however).

But McAvoy is the film's standout character, juggling a dozen or so personalities in a performance that's sadly not in service to a better film. The same can be said of Paulson, a fine actor who's forced to do most of the declamatory heavy lifting and whose character ultimately underwhelms.

When The Sixth Sense was released back in 1999, Shyamalan was hailed as "the next Spielberg" for his grasp of classical Hollywood style and crowd-pleasing plot trickery. This prediction seems to have been premature, given the 13-year gap in which none of his movies received mostly positive notices. And while we briefly reinstated his membership in the rapidly dwindling club of directors whose works we don't reject out of hand, his insistence on immediately reverting to the same bag of tricks was maybe the least surprising twist of all.
KEEP THE HOUSTON PRESS FREE... Since we started the Houston Press, it has been defined as the free, independent voice of Houston, and we'd like to keep it that way. With local media under siege, it's more important than ever for us to rally support behind funding our local journalism. You can help by participating in our "I Support" program, allowing us to keep offering readers access to our incisive coverage of local news, food and culture with no paywalls.
Make a one-time donation today for as little as $1.